For a tiny island about 1,000 feet from the mainland, Pollepel Island has inspired much discussion—some of it historically informed, some of it totally imagined.

The speck of a spit, in the Hudson River just south of Beacon, N.Y., and northwest of Cornwall on Hudson, is a steep, rocky protrusion, where an eccentric arms dealer built a showy castle earlier in the last century.

The island might never have created the speculation it has—in fantasy novels, Native American legend and the news, following a recent murder, to name a few instances—except that it is in every window-gazing Metro North passenger’s field of vision. As one rounds the curve between Breakneck Ridge and the train’s Beacon stop, the mound of granite and the crumbling ruins atop it—which read “Bannerman’s Island Arsenal”—are the sort of strange mythic presence that suggests a set piece for Game of Thrones.

That placement has sparked what artist Melissa McGill has dubbed “train mythology,” about the island. That mythology was also part of what inspired the Beacon-based artist to make an ambitious art work there.

“I would see it on the train and hear people talking about it on the train,” Ms. McGill told a tour who joined her on the island Friday. “There were multiple truths,” about the mysterious land mass. “It sparked my curiosity.”

Ms. McGill is likely to spark further speculation about just what is going on on Pollepel with her installation: a series of 17 lights, affixed to the tops of poles on the island, which light up around dusk each evening, starting last Friday and set to continue for the next two years.

“Constellation,” as the light series is called, is viewable from the highway, a boat or the train.

Site of an art installation is just the latest role for a fabled island that has been many things: the site of a prison proposed (but never built) by George Washington, a sanctuary for prostitutes, a hideout for early Anglo settlers running from the local Lenape Indian tribe, who believed the island was haunted, and a guns and ammo storage center for Francis Bannerman, a munitions tycoon.

The lights in “Constellation” are arranged in such as way as to outline the original Bannerman Castle structure, plus five extra lights above that outline, in the skyline—a nod to the Lenape belief in a celestial path to the afterlife.

Ms. McGill, who has spent three years getting all the permissions to install the work—in addition to designing it, having the poles forged and deciding on appropriate lights—is the first to admit that “Constellation” was viewed dubiously by many from the moment she proposed it.

“It was a real leap of faith,” for her supporters and those that donated to support the project, she said.

The budget of $650,000 was made up of funds from an Indiegogo crowdfunding campaign, a $20,000 National Endowment for the Arts grant and donations from family foundations and people in and around Beacon, the artist said. The first funds came from the local community, which was interested in seeing the island reimagined—especially since many dark rumors about the island persist, in both train lore and indigenous speculation. (Indeed, just recently the body of Vincent Viafore, allegedly drowned by his fiancé on a kayaking trip, washed up on the shore).

Eventually, Ms. McGill was “able to show that the community was behind the project,” and other funding fell into place. Now, residents of the area can see the installation from shore or via boat.

The lights, which are solar-powered, turn on in sequence after the first one is triggered by the setting sun.

The lights fade on over the course of 15 minutes each evening, remain on for two hours, and then fade off.  They aren’t as bright as say, a standard street lamp; instead, they’re supposed to look like stars, twinkling on without the viewer explicitly noticing.

A major supporter through the development and installation of the work was Glenn Lowry, the director of the Museum of Modern Art. “Glenn [and his wife, Susan] connected me to people who supported the project,” said Ms. McGill.

That support was both financial and logistical, she said, as getting approvals from the many involved entities, such as the Parks Department and the Bannerman Island Trust, involved a lot of filling out forms and waiting.

The process was a bit of a catch 22, where funding couldn’t come through until permissions had, but no one involved in permissions was likely to take a project with no funding seriously.

“I got a lot of grant rejections,” Ms. McGill said.

In the end, even after this year’s ARTWORKS grant from the NEA came through, there was the difficulty of actually getting the materials to a small island, where no one was sure there would be bed rock to drill into. If there hadn’t been, the Constellation team would have had to pour concrete for each of the 17 poles, some of which reach 80 feet into the air and would need deep anchoring.

“Luckily, we found bedrock in all the spots,” she said. That could refer to the community’s support for her unlikely project just as much as to the literal process of erecting her artwork. 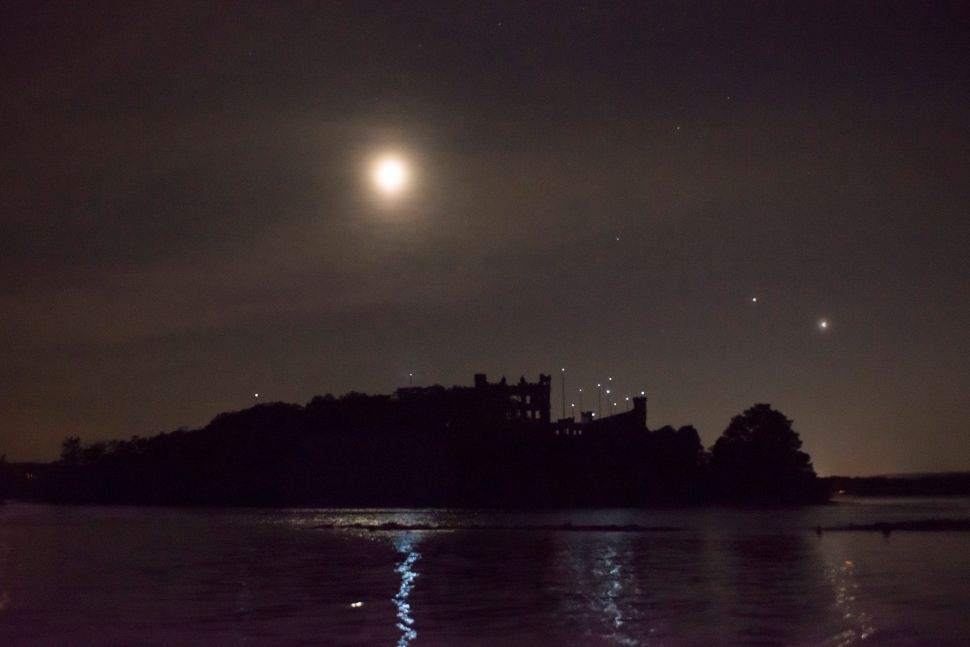