At the Fun Home Tony Award party at Tanner Smith’s on West 55th street that went into early this morning, theories were abundant about how this non-commercial $5 million musical — the story of a suburban Pennsylvania teen realizing she’s gay and her closeted, suicidal funeral home director dad – won the most commercial of awards, best new musical.

“The show just struck a chord,” said Patrick Herold, the head of theater at ICM Partners, who represents Lisa Kron, the now-Tony-Award-winning book writer and lyricist. “It’s so elementally truthful. Anyone who sees it recognizes that family.”

After the big win and Sydney Lucas’s powerhouse televised performance of “Ring of Keys,” about the heroine reacting to seeing a striking butch woman, producer Barbara Whitman said sales instantly improved. As of 3:30 p.m., the show moved more than $300,000 of tickets and was on track to do five times its normal daily business, she said in an e-mail. “We had a huge amount of support among actors, directors and playwrights,” she noted at the party.

The Visit, the struggling Kander and Ebb musical starring Chita Rivera, said it will close on Sunday after it was blanked last night. It sold $194,000 of tickets last week.

Fun Home probably needed the win to sustain a long and profitable run. Last week, its $653,000 in sales were the best since it began previews on March 27 but half that of its principal Tony rival, An American in Paris, which grossed almost $1.4 million. “American in Paris is a title that’s known,” composer Jeanine Tesori said at the party. “For Fun Home, an original show with new music with this subject matter, it’s very helpful we get this acknowledgement.”

Not being another juke-box musical also worked in its favor. An American in Paris is at least the third major Broadway show in two decades to mine the Gershwin catalog. The most recent, Nice Work if You Can Get It, closed two years ago. At Paris, an adaptation of the 1951 Gene Kelly movie, many are enthralled by the gorgeous cast performing sublime ballet. But following a record Broadway season, where grosses topped $1.3 billion, the tiny cadre of 843 Tony voters ultimately favored the more original show, even if it’s not likely to sell as well on tour.

Press agent Rick Miramontez’s O&M Co. helped keep Fun Home ubiquitous. It was O&M’s third consecutive seemingly underdog win at the Tonys, following A Gentleman’s Guide to Love & Murder last year and Kinky Boots in 2013. Something Rotten! was also everywhere since the April 28 nominations and its show-stopper number “A Musical” was the broadcast’s first number. But it won just one Tony, for featured actor Christian Borle. (That was nonetheless the 200th client Tony for PR powerhouse Boneau/Bryan-Brown, which represents Something Rotten!.)

Might David and Alexander be available to host the likely Hamilton coronation next year? 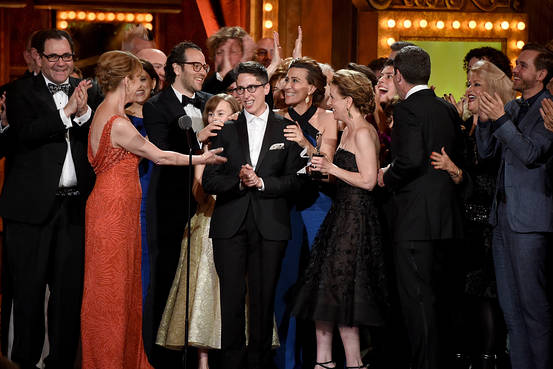