In An American In Paris, the drabness of a monochrome military uniform is emphasized by the ominous greens and blacks of the stage. In The Audience, Queen Elizabeth II, as played by Helen Mirren, wears a pink shift that contrasts with the bright yellow of her chair, making her the focus of the play. In Airline Highway, a sexy crop top paired with men’s jeans underscores the gender-bending of a transgender character. In Something Rotten!, the clothes look Elizabethan but move like modern garments. Each of these theatrical decisions was made by one of this year’s Tony Award nominees for Costume Design—in this case, Bob Crowley on the first two productions, David Zinn and Gregg Barnes, respectively, on the last two.

Costume designers are the unsung heroes in theater. People may tune in to the Tonys to watch their favorite musical, or perhaps favorite actor, win an award. But the costumes are crucial in telling the story, in presenting the narrative effectively to the viewer.

The Observer spoke to three of this year’s nominees and learned that award-worthy costume design, whether it’s for a period piece or a story set in modern times, calls for walking a tightrope between issues of authenticity and theatricality.

Mr. Crowley, for example, is a purist. The six-time Tony award winner (for Set Design, not Costume), nominated for a Tony in Costume Design for both An American In Paris and The Audience this year, views period authenticity in costumes as nonnegotiable.

In The Audience, a play about the Queen’s talks with government ministers over the course of several decades, when it comes to a figure as well-photographed as the Queen of England, veracity was key to the entire production, he said. This is true, too, of An American In Paris; it takes place in postwar Paris, a time period that has been well documented and is well known to many theatergoers. The audience would notice historical mistakes, and wouldn’t tolerate them.

But there were practical issues to consider. For Paris, he said, “Everything was made [for the production]. We try and find fabrics with a lycra in them and we’ll print it to look like a vintage fabric.” The clothes needed to look postwar but allow the dancers to dance. “If you can’t dance in it, there’s no show,” said Mr. Crowley.

There can be challenges with specific actors. David Zinn, a Tony nominee for his work on Airline Highway, struggled to get Julie White, who plays a prostitute named Tanya, to look like the character she was playing. He said, “Julie is so beautiful and has a lot of things that work against feeling like a down-on-her-luck prostitute. You can put a crappy, crappy dress on her and she looks amazing. I did some research” into what was appropriate to the region, the role, “but ultimately the research wasn’t the most useful because it was so dependent on what in the fitting room made her look like the character.”

In Something Rotten!, a musical about creating a musical set in Elizabethan times, Gregg Barnes, a two-time Tony winner, said, “We didn’t want the costumes to be really heavy, because there’s tap dancing, crazy kind of hullabaloo dancing. So the shapes are Tudor period but the way they’re fit is more contemporary. It’s sexier. So from the waist down, all the fabrics we chose are really light.”

In the case of Helen Mirren, the costume changes largely take place on stage, in front of the audience. Mr. Crowley said, “Her hair changes, her shoes change, her clothes change. Everything changes. And she does it mostly on stage, in front of [the audience]. We don’t actually take her off stage all the time. She’s physically transformed herself in front of you and the clothes were vital to that.”

Mr. Crowley, restricted as he was in remaining true to Queen Elizabeth II, needed to make sure that Ms. Mirren always stood out from the other actors throughout the performance. For example, he “chose a really strong royal blue for the Queen in her scene with Margaret Thatcher to make [Elizabeth] look at her most regal. I always thought that Thatcher competed with the queen in the way she dressed—and of course they were the same age.”

Historical research is an integral part of the Tony nominees’ process. But the research is not necessarily cut-and-dry. Sometimes a period piece requires modern inspirations to tell the story effectively. Mr. Barnes said, “William Shakespeare is one of the characters [in the show], the way the play is written he is kind of like a rock star. So on him and on the people who are in his kind of entourage, we definitely pushed the envelope and made them look more like rock icons. So when I was researching it, I didn’t just do portraits from 1595, we expanded the search into rock stars.”

In An American In Paris, costume color expresses the mise en scène. Since the musical takes place in postwar Paris, a time when parts of the city were in ruins and food was still rationed, the clothes and the scenery needed to reflect that feeling of loss and poverty. Inspired by Nazi archival color footage consisting of muted colors with a green tinge, and reds that were rich and vibrant, Mr. Crowley began with “grays and browns and dark greens,” to reflect the dour mood of the period.

But the minute love begins to bloom between Jerry and Lise, “color starts to appear in the flowers … then we have a fantasy sequence where they go into the New Look, the Dior New Look.”

Mr. Zinn also used color to help move along the narrative in Airline Highway. It’s a musical about a rag-tag group of misfits living in a motel along and “there’s such a faded sense of ‘used to be pretty, now unbleached and exposed’ that was such a great background for the characters. I definitely played with who fades and disappears more into that world, and who pops out, and why. And in the second act, during the party, there’s an explosion of color … It helps the audience feel and track, on a subconscious level, who might get out of that life—and who’s trapped.” 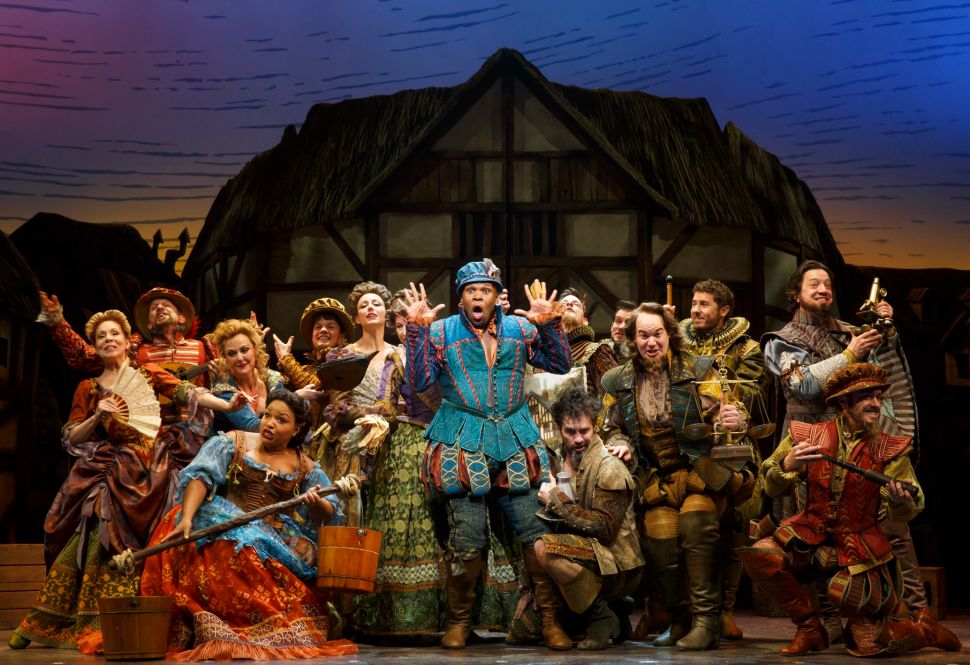