Last season, we declared True Detective may have been a little too clever for its own good. At the time, we had said that while the show was beautifully acted–with haunting direction and cinematography–novelist and showrunner Nic Pizzolatto had ultimately created a mini-series with nothing more than stoner logic and the backbone of pulpy, noir crime. Here, we predicted that the finale would be a letdown in its reveal that we were supposed to be sided with Rust Cohle the whole time.

The biggest fear is that all Rust’s jabbering will amount to is some Easter Eggs for the fans and a very long, very skilled sleight of hand.

Welp, we were right about that.

Television, once my chosen medium for vegging out, has become increasingly snobby in its literary pretensions, and mainly that is a side effect of getting smarter people to write shows, so I let it slide…But maybe it wouldn’t be so terrible to remove just one layer of artifice. After all, that would still leave us with three dimensions.

Luckily, there were other fantastic, intelligent, stunningly gorgeous shows that I could flip over to anytime I wanted something more…meaty. Bryan Fuller’s Hannibal, for instance: proof that NBC still had a craving for well-crafted dramas: a highly prized vintage character– in this case, Thomas Harris’ infamous villains, the refined cannibal/psychotherapist/dinner host Hannibal Lecter (Mads Mikkelsen)– paired with an atmospheric fusion that combines “American Gothic overtones via European Art Nouveau,” with “that scene from The Shining with the elevator blood.” The aesthetic of the show is so masterful that people spend hours Tumblring, Pinteresting and blogging about different design elements of Hannibal.

And while I liked that element of the show, it was hard for me to see beyond it: yes, this may be “your design,” but I’m also going to need some good ole’ character development and audible dialogue in order to consider this narrative television. Look: I barely even minded that I had to put on close captioning whenever Lecter would have his “sessions” with Will Graham, the FBI’s most astute profiler of serial killers (who, never mind the fact that he misses Lecter completely, also happens to be on the spectrum.) In fact, it may have been Mikkelsen’s heavy Austrian-Danish accent that obscured some of Hannibal’s weaker points as a series. Namely: the barrage of baroque, erudite dialogue that sounds like it was written by a very stoned second year at St. John’s.

But the first two seasons of the show more than made up for the sometimes indecipherable philosophizing in its gorgeous visuals: the visceral, grotesque beauty of the set and props; the elaborate meals that made your mouth despite the meat’s origins (the show’s food designer, Janice Poon makes cannibalism into #feedinghannibal tag on Tumblr); Will’s manifestations of his subconscious/unconscious/Hannibal/Abigail as a terrified and terrifying black stag mired in primordial ooze. It’s aesthetic was also a distraction from the fact that we were watching a case-of-the-week structure in season 1. Season 2 was even more ludicrous; a byzantine game of cat and mouse that even TV’s other resident sociopaths–Frank Underwood and Papa Pope come to mind–would consider a tad too savage and indulgent.
[youtube https://www.youtube.com/watch?v=bgkVzYe7p_A&w=560&h=315]

Most disturbingly, I don’t trust Hannibal to follow through on any of its darker devices: season 2 that ended with almost every main character dead at the hand of a coxcomb sociopath as he jetted his way to Europe. We should have known Hannibal was not above “Not dead yet!” copouts: Freddie Lounds, Will Graham, Abigail Hobbs (2nd season), Doctor Chilton (Raúl Esparza), Dr. Abel Gideon (Eddie Izzard), FBI Agent Jack Crawford (Laurence Fishburne), and Michael Pitt’s incredible Ledger-as-Joker-channeling pig factor scion, Mason Verger (who will sadly be replaced this season by Joe Anderson) have all been resurrected after a seemingly fatal incident.
[youtube https://www.youtube.com/watch?v=lI0ZoSP6P1o&w=420&h=315]

But even worse than playing dead? The “It was all a dream/hallucination” fake-outs: which happen with such frequency that it took me awhile to realize that one resurrected character was still, amazingly, quite dead–though apparently well enough to be appear as a cogent manifestation that we’re supposed to believe now that Will’s over his minor bout of encephalitis. (Thank God. I could never see how Will and Abigail’s relationship was anything more than To Catch a Predator Catching a Predator creepy.)

Hannibal is given a lot of credit for its stylization, but it, like True Detective, is too clever by half a shade: a sumptuous, grotesque version of Law and Order: Criminal Intent, BlackList, or –bless– The Following. It gets a prestige credit that I believe is unearned, not because the show isn’t a goddamn masterpiece in motion, but because stripped of its furnishings and special effects, the characters and story aren’t enough to render it great television. Not with Will Graham and his total lack of affect left carrying the emotional heft of the entire series.
[protected-iframe id=”49fdebf7fe1776c70df719a078704a80-35584880-35147716″ info=”https://www.youtube.com/embed/zfqBRLoGgUc” width=”560″ height=”315″ frameborder=”0″]

Maybe Hannibal should be allowed to take itself this seriously, though I prefer my serial killers and sadists to have a little more fight in them. It is, after all, the best looking show on television: the images that reside only in nightmares and (apparently) the Uffizi. But still, my favorite thing about Hannibal remains the amazing parody Twitter account, @HannibalAtTheMall (formerly @HannibalAttheZoo), which imagines the recondite musings of Dr. Lecter in far less appropriate settings.

Your quarter doesn't buy you a handful of food for the billy goat. It buys the forgiveness of all the billy goats you are unable to feed.

If you were to escape, tortoise, you would be forgotten almost immediately, invisible. It is your enclosure that makes you a god.

Some suffer for want of a Cinnabon. Others suffer having eaten one.

And isn’t that the problem with Hannibal in the end? It’s all flavor and no substance, 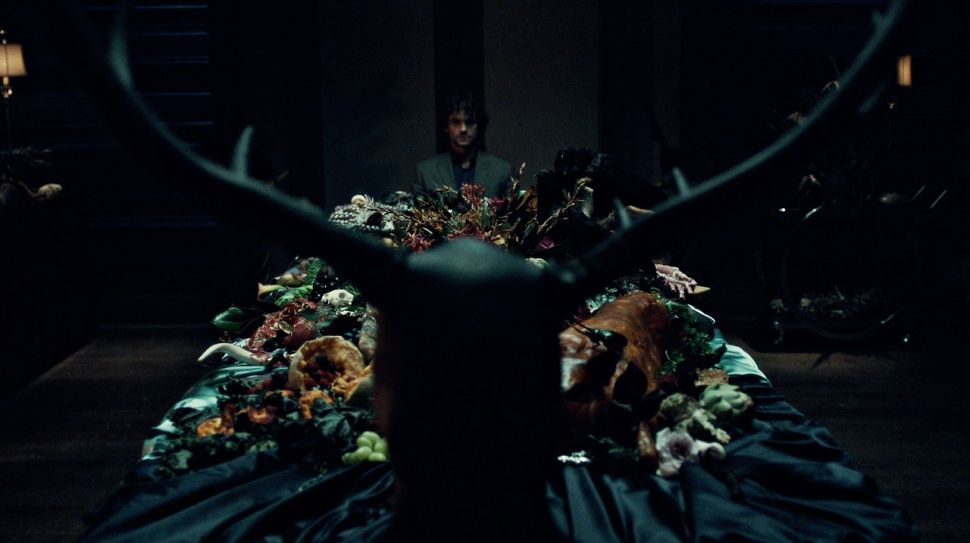