MOUNTAINSIDE – The sense was the body count could mount so long as the essential component parts remained intact. There was no mention at this Union County Democratic Committee reorganization meeting, for example, of Assemblywoman Linda Stender (D-22), felled in a shore house scandal; or of former Union County Chair Charlotte DeFilippo, vaporized in a local political firefight in her hometown of Hillside; or of former Plainfield Democratic Chair Jerry – actually, scratch that – the committee, in fact, tonight unanimously reelected Green chairman despite a drubbing he took last Tuesday night in his home town of Plainfield.

“I got the support of all 21 towns,” said Green, grinning with veteran state Senator Ray Lesniak (D-20) happily in the wings as committee members flooded the ballroom at L’Affaire.

“We’re united,” said Lesniak, finding PolitickerNJ in the crowd and making sure that narrative stuck, out of a dozen agonies proved minor irritations by virtue of Green’s survival as chairman and the budding Union County plotline of Lesniak as a legitimate 2017 gubernatorial commodity.

“A lot of guys in the race – they ought to know that you are real; everybody’s going to be shocked,” Green told Lesniak, once the latter had found a chair in the front row with the word “Elizabeth” written on it in bold letters.

His standing assured as the chair who will award the Union line in the 2017 Democratic Primary for governor, Green did give a nod to the man who beat him on his home field last week – Plainfield Mayor Adrian Mapp, who upended the local party chairman (Green in his local iteration) in a county committee scrap and who – summoned to take a bow as the new local chair – stayed on his feet long past the dying applause, as if affixing himself in the countywide public eye of the party.

But a starring role at the microphone all evening long – a program gratefully rushed somewhat by an abiding desire in the room for the proximity of a TV and the third game of the NBA finals – went to state Senator Nick Scutari (D-22), who absorbed the Linden loss last year of a local Democratic Party ally in the primary by welding Mayor Derek Armstead to the architecture of party. Indeed it was the now accepted Armstead, once dismissed by the upper echelons of the establishment here as a cowboy – who solemnly put the name of Jerry Green into nomination for a two year term as chairman.

“He’s been doing a wonderful job as mayor,” said the senator, powerful chairman of the Senate Judiciary Committee, who made sure to reroute longtime local Armstead antagonist Chris Hudak and himself assume chairmanship of the local Democratic Party in the name of olive branch Armstead-appeasing optics.

“A judge will not be made unless he gets Nick’s blessing,” said the chairman, then added with a smile, “And you know that makes me feel good.” 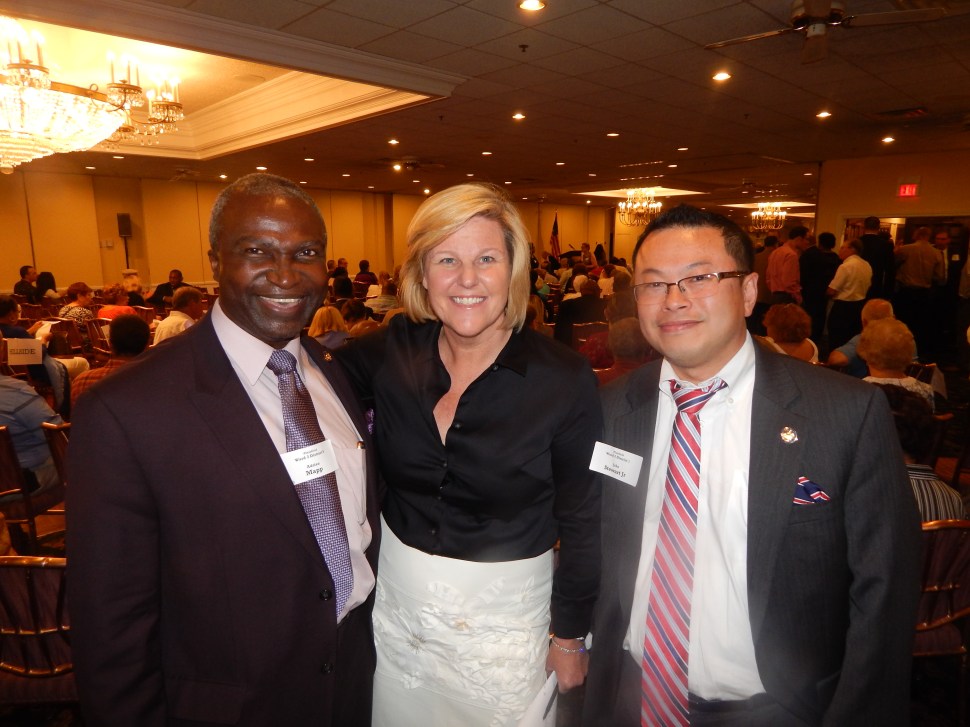 Certainly a lingering plot twist concerned Fanwood Mayor Colleen Mahr (pictured above with Mapp and Mapp Chief-of-Staff John Stewart, Jr.), allegedly tomahawked by Lesniak-Green-Scutari in her bid to succeed Stender as the assemblywoman (emphasis on woman) from the 22nd District. Tripped up by former Rahway Mayor Jim Kennedy in what sources at the time said was Lesniak-Green-Scutari’s cynical play to assure Green the chairmanship again by securing Rahway’s County Committee in exchange for Kennedy’s wholly uninspiring male presence on the 22nd District ticket, Mahr appeared healed as she navigated the room in heels. Buzz had trailed Green’s Tuesday loss into at least the weekend with the possibility of Mahr’s chief ally, Sheriff Joe Cryan, maybe mounting a move on the locally weakened Green for the county committee chairmanship and the right to choose the county party organization’s 2017 candidate for governor.

There was the unspoken sense, when Mahr appeared alongside Mapp, of the latter having exacted payback sufficient for the former – even if only at a friendly distance – to savor.

When Green beckoned to Mahr to say some words to the crowd, she appeared to hesitate before, apparently, the mayoral impulse won over and she gracefully took the mike from her former tormentor. “Now I know the way my kids feel,” said Mahr, as Green towered over her.

In the end – as Mahr again accepted the committee’s unanimous support for another tour of duty as vice-chair – those dramas had the feel of soap suds more than passionate operas that jeopardize and actually do in the main characters.  Out of the immediate mire of the past election cycle and over the unuttered politically mortally forgotten former faces extinguished in the furnace of politics, Green made it known where he intends to place his own and the party committee’s attention.

“The Republican Party is over,” announced the newly reelected Democratic Chairman of Union County. 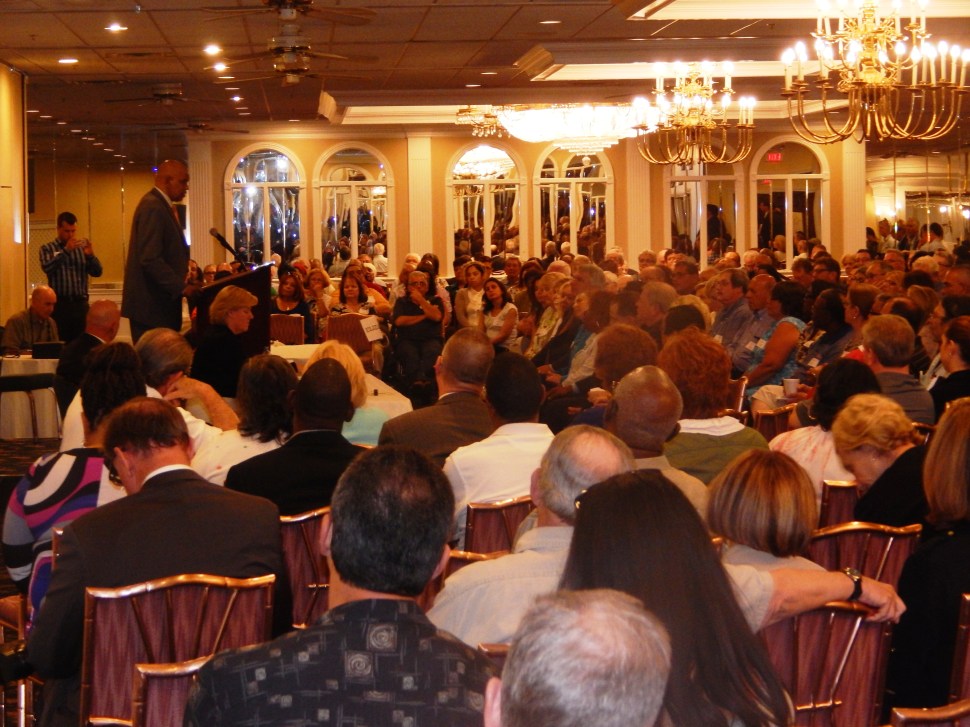 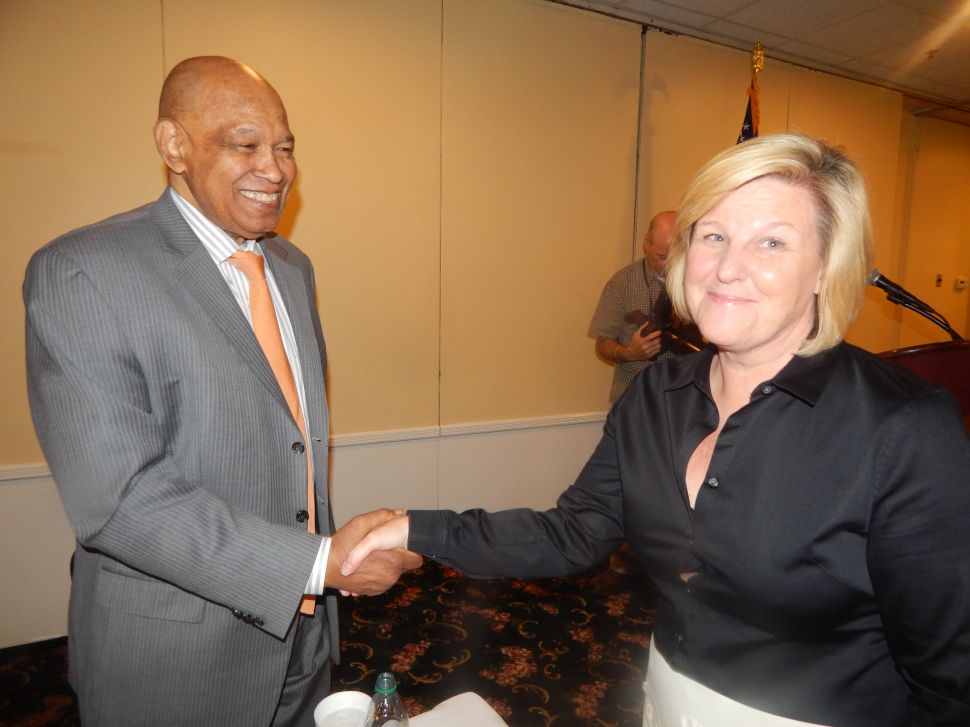