Anish Kapoor’s monumental installation at Versailles has barely been open more than a week and already vandals have left their mark on it. Dirty Corner, a giant funnel of steel and rock that faces the palace, opened June 9 to a swirl of controversy after Mr. Kapoor made divisive remarks to journalists alluding to the fact that the sculpture is meant to resemble “the vagina of the queen coming into power.” On Wednesday morning, management at Versailles found the work spray painted with yellow paint, according to a report from Agence France-Presse. Officials say that the work is now being cleaned.

Though artist has clarified his since original statements, saying, “Inevitably, one comes across the body, our bodies and a certain level of sexuality. But it is certainly not the only thing it is about,” it apparently wasn’t enough to quell unhappy viewers who took his abstract allusion to genitalia sorely. The ruling Socialist Party released a comment on the incident, calling it “unacceptable that art, the compass of freedom, suffer because of the obscurantism of some people.”

Mr. Kapoor responded in an interview with Le Figaro, calling the event a “tragedy” and expressing that he was “extremely sad” over the defacement of the work. He went on to say, “blind vandalism proves that the power of art can intrigue minds and move limits […]. The positive thing about this attack is that it highlights the creative force of an inanimate object.”

Vandals have attacked the public work of a contemporary artist in France before—and very recently. In October 2014, Paul McCarthy installed a 79-foot-tall inflatable green sculpture titled Tree in the Place Vendome. Despite its title, it undeniably resembled a butt plug, to the horror of Parisians. The artist was attacked in the street and struck three times in the face. After one week, vandals managed to deflate the work, just ahead of the opening of Mr. McCarthy’s exhibition “Chocolate Factory” at the newly reopened Monnaie de Paris. The work was not reinstalled. 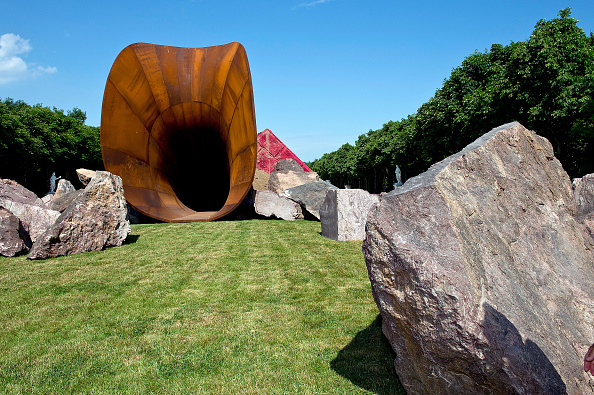