Fathers Day seems to be synonymous with barbecue. Gazing at an ad for hot dogs, wings and watermelon, my mind was flooded with memories of family meals big and small, recent and in times gone by.

“Open up. Here comes the food train. Choo, choo!” These were my words as I used to feed my sons.

While I could eat all day, Benjy and Joseph truly just eat for fuel. In light of this, they frequently needed assistance and motivation to eat. I sang, told stories and and waved the fork like a choo-choo train to get them to open up. Shouldn’t this train be called a chew-chew?

The things we parents do for love.

Feeding our sons took effort, concentration, and willpower. Weight Watchers advises parents not to eat off their child’s plate. Better to clean their plates with a Hefty bag than adding to our own heftiness. This is difficult for me, especially in the morning. Imagine holding a spoon of non-fat yogurt while in one hand while guiding a fork loaded with pancakes smothered in maple syrup in the other.

To be or not to be overweight, that is the question.

The other morning while watching Benjy and Joseph eat pancakes, I remembered my parent’s kitchen table.

My father had a wandering fork. Sitting next to dad was a mixed blessing. On the one hand, I got closer access to him; on the other, he got closer access to my plate. I learned quickly that if I liked dinner, I should eat quickly. Otherwise, he would help himself to my meal.

My dad was always a big guy. He loved to eat. He never met a matzah ball, french fry or steak he didn’t like. Nothing was more delightful to my father than a delicious meal with spirited conversation in the company of friends and family.

One of his favorite schemes when we dined out was to look at the french fries on the table next to ours and ask innocently,”How are those fries?”

Somewhat surprised by such a sincere question, the astonished patrons would respond, usually positively. Who ever heard of a bad french fry?

To which my dad would say, “Can I try one?” Without fail, his wandering fork would visit their plates soon enough. Not infrequently my father got more than fries. He actually made some new friends. This practice always made me want to crawl under the table, especially in my teenage years. In all fairness, many friends and family appreciated this adventurous side of my dad and saw it as funny, bold and even cool.

Truthfully food played a big role in my father’s life from his being raised in the supermarket business—Savenor’s—to his own wine and cheese shops in Boston to his love of a good party. His foodie passion ran so deep that when our family traveled to another city we would always visit a local supermarket. Included in our itinerary to Jerusalem? Supersol. In London? Selfridges. In Ft. Lauderdale? Publix. You get the picture.

At a certain point, however, the food caught up with him. He grew large and heavy.

Out of love, our family urged him to take care of himself. He knew just what to say to terminate the conversation; frequently this meant saying nothing at all.

After years of cajoling, he thankfully heard us and at 59 began losing weight. The pounds dropped quickly. Little did we know there was another reason besides will power for this rapid weight loss. A few short months later we learned that he had pancreatic cancer. This voracious cancer occupied his insides and systematically devoured much of his physical being. One of the most confusing casualties of this heinous ailment was his loss of appetite.

How ironic is it that when my father was 59 we begged him to stop eating, and a few short months later at 60 we needed to beg him to eat.

In his last weeks of his life, he didn’t have the energy to lift himself, let alone a fork. In this weakened state, many forks were waved in his face with a bite of a waffle, a french fry, anything for strength.

But he couldn’t. The cancer had killed his appetite and, in what felt like a 10 month blink, snatched him away from us. When he took his last breath, he barely resembled my father with the wandering fork.

From the moment I grasped the magnitude of my father’s terminal illness, I started eating. It begin as a coping mechanism to numb myself from the pain of loss, questions of faith and a radically unanticipated turn of events.

At this most difficult fork in the road of life, I basically pulled over for a milkshake and fries. When my father died, I put on 50 pounds, and for over ten years I ate and ate and then went up to the buffer for thirds. Food filled a void. For reasons that felt beyond my control, my appetite could not be satiated. I wonder if in some strange way I was eating for two?

Fast forward a decade, and it became clear that I had reached another fork in the road of life.The wake-up call occurred the day I turned 40 and saw my reflection in the mirror. I looked like my dad, when he was still craftily employing his fork with reckless abandon.

I challenged myself that day to lose 40 pounds during my 40th year. I reached my goal 18 months later.

Losing the weight was the easy part. The challenge has been keeping it off.

It is a daily struggle, and the battleground of this challenge is found at the tip of my fork. Our boys’ delicious food makes my mouth —pancakes, mac n’cheese, and Grandma’s coffee cake. I have learned from the master that all I have to do is steer my fork towards their plates. They would neither notice nor care.

Losing weight doesn’t guarantee an infinite number of Father’s Day BBQs or Thanksgivings, but it does give us a fighting chance to give thanks more often for the gift of life and family.

As soon as I feel my fork moving toward another’s placemat-zone, I pause. Ultimately being around to see them grow up is more important, more delicious, than the pancakes.

I can’t help but imagine that if my dad were still alive, those boys would learn quickly to gobble their breakfast. Otherwise, their Zayde’s wandering fork would swiftly relocate those pancakes. I frequently fantasize about my boys spending time with my father, especially on Fathers Day.

The conversation would begin with him asking, “Joseph and Benjy, how are those pancakes?” Oh, how they would have laughed together. … Only in my dreams. 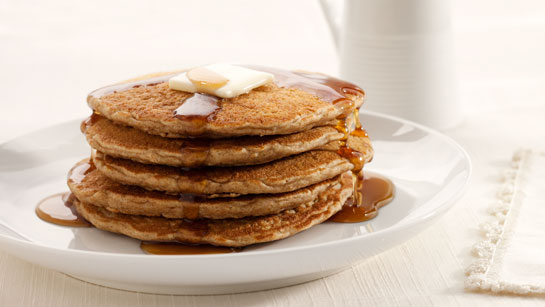