Can we talk for a moment about whoever it is in charge of keeping order in Wayward Pines, and how awful they are at their jobs?

Ethan is seriously the only person in Wayward Pines that is just not having it. He could not telegraph the fact that he is trying to escape more than if he put up a billboard asking for directions out of town. Everything about him is against the law. And since “they” apparently know everything, “they” know that Ethan is actively trying to undermine them. So, naturally, they give him access to all the files that expose this town as a sham. Then, later in the episode, we learn that being sheriff gives him access to a gun locker.

What? That’s like if during the French Revolution the government had said “you guys aren’t progressing fast enough. Here are some shotguns.”

And you know what definitely isn’t helping? Here’s a quick rundown of everything the microphones in Wayward Pines can’t pick up sound over: a tea kettle, a children’s music box, running bath , probably a gentle Autumn breeze.

Oof. Let’s back up. To pick up from last week, Theresa is still taking everything way more casually than any rational human being. Ben is the only one freaking out over watching hell-beasts drag a corpse into the darkness, but is easily calmed when Ethan tells him it was just wolves. “This is wolf country,” he says, because sure.

The Burke’s worries that anything will happen to them are erased when Ethan learns he’ll be sheriff now. Why? Because plot progression, baby. Actually, the “fast transition” where Ethan gets a cake, a handshake from the mayor, and his picture taken for the paper all within like a minute was actually pretty funny. It was the only time this show was more “haha this is ridiculous and kind of fun” and less “can you believe how mysterious everything is?”

So now that Ethan is sheriff, he finds a safe full of files detailing the townsfolk’s past lives. Now, I know I said I wouldn’t compare this show to Twin Peaks (a rule I’ve already broken roughly five times) but look at this. 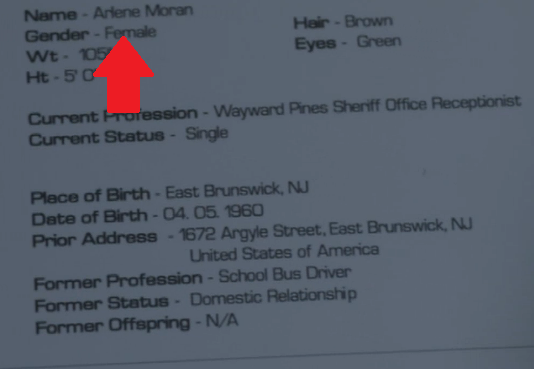 Anyway, the aforementioned property defacer, Peter McGall, is brought in under citizen’s arrest by Pam, who lets Ethan know he has to reckon Peter by tomorrow night. Why tomorrow night? Because plot progression, baby.

Peter and Ethan have a lot in common, in that they are both fighting the powers that be in Wayward Pines. Only one of them is sentenced to death though. Why only one? Because plot…oh you fucking know.

“There is one way out,” Peter tells Ethan. “MY FOREHEAD.” 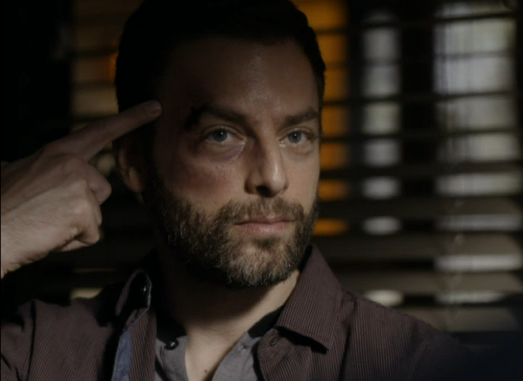 Peter tells Ethan the story of how he came to Wayward Pines, which involves cheating on his wife with Pam. Some keen eyes might spy the fact that Ethan and Peter both have adulterous pasts, and might begin to think there’s a connection there. Personally, I think Peter deserves every horrible thing that happens to him because he un-ironically says the sentence “I asked her to come back to my hotel room, take the party up a notch.”

Back at home, Ethan breaks the news to Theresa. “If you kill somebody in this town, they give you his job,” he says spitefully.

(Honestly, that sounds like the set-up for a sitcom joke. Like if Theresa had responded with “I wish you had killed Franny’s husband instead. At least HE takes out the trash,” and then a laugh track played over some rolling credits, I don’t know if I’d be surprised.)

There was a long, long stretch of this episode where I genuinely could not have cared less about what was happening any less. Ben gets a girlfriend, who is probably just an M. Night Shyamalan ghost or something. Ethan and Theresa go to a beer garden at one point I think? The phrase ice-cream cone eating bastard is used to describe the former sheriff, which I’m pretty sure is a phrase lifted directly from one of these recaps.

But yeah, for a lot of this Ethan is just the sheriff and doesn’t really have any sort of plan and it’s all just…weird I guess? I don’t know. I’m not even sure the show knows. It’s like they knew they had some novels to adapt, and ten episodes to do it, and were just like “put those words…in those episodes.”

In the end, Ethan does come up with a plan. He goes to Peter’s cell and says “I’m going to hide you, in the woods, in like a bush or something. I don’t know.”

Peter, perhaps noticing this is a godawful plan, tells Ethan to just take him to the fence. In fact, Peter is aware that all Ethan’s plans are so bad, he opts to just throw himself against the electrified fence instead.

And, apparently, the powers that be see this and say “Whelp, good enough. We trust Ethan now.” And that’s that.

Except Pam. Pam isn’t buying Ethan’s shit, not for one second. “I know you let Peter McCall do your job for you. You might have fooled everyone else, but I’m a registered nurse,” she says.

Aaaand wait. Halt the recap. What…the fuck does that even mean? Oscar winner Melissa Leo is a good enough actor to make it sound like it makes sense but, it does not? Does she mean nurses are better at detecting lies than everyone else? Is she referring to the fact that Peter was electrocuted, and his throat wasn’t slit? Do you have to be a registered nurse to notice that a slit throat and electrocution look different?

Anyway, it’s just threatening enough for Ethan to take his Wayward Pines-sanctioned shotgun and attempt to escape via mountain climbing. This proves a problem, because I’m pretty sure Gollum is following him. 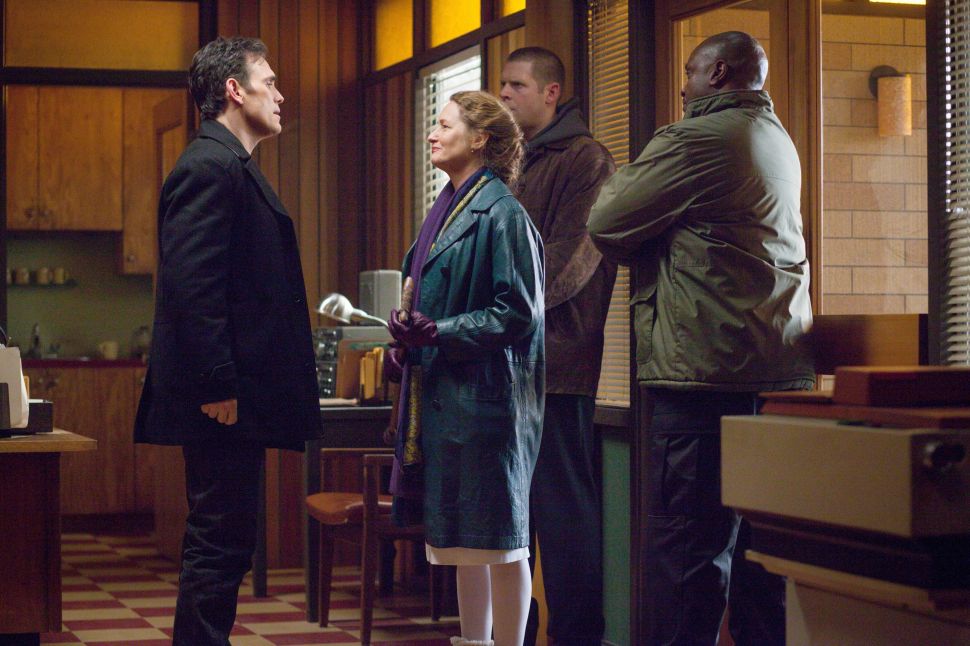