Geneticists use the term “hybrid vigor” to describe the superiority of organisms that result from the breeding of vastly differing parents. For instance, the mule is more intelligent and more patient than its parents the horse and the donkey. When opera mixes genres, the results can be pretty vigorous, too—at least some of the time.

Two small-scale performances last week offered examples of the benefits and pitfalls of crossing genres. Ariadne auf Naxos, performed by Utopia Opera in Lang Recital Hall at Hunter College, turned out not only solidly competent but downright charming. In contrast, The Sorrows of Young Werther, presented by the Ensemble for the Romantic Century at the Leonard Nimoy Thalia at Symphony Space, seemed overlong and ploddingly earnest.

Utopia’s triumph is all the more delightful when you consider Ariadne is a very offbeat sort of opera. The Richard Strauss/Hugo von Hofmannsthal collaboration began life as a divertissement in a production of Moliere’s comedy Le Bourgeois Gentilhomme. When the combination of spoken drama with opera proved too cumbersome for frequent revival, Hofmannsthal devised a brief “backstage” prologue to set Ariadne in context.

In the definitive version, a young composer has written a serious opera based on the mythical princess Ariadne, abandoned by her lover on a desert island. In his work, the heroine longs for death until she encounters the god Bacchus, who reawakens her desire for life and love. The composer’s patron, though, capriciously insists that at its first performance this tragedy should be given simultaneously with another opera, a sex farce about the coquette Zerbinetta. In the end, the two radically different pieces meld into a harmonious whole greater than the sum of its parts.

What makes the piece so tricky to bring off is the constant shifting of tone from high-flown poetry to slapstick farce. It also includes two of the most difficult roles in opera to cast: Zerbinetta, with her long, mind-bendingly difficult coloratura aria, and Bacchus, which demands heroic power in the highest tenor tessitura.

For these parts last Saturday night, Utopia delivered artists who could hold their own in the world’s major opera houses. Stealing the show was Halley Gilbert as Zerbinetta, flinging out crystalline trills, arpeggios, staccati and roulades with an almost lazy insouciance. Moreover, the warmth and depth of her soprano illuminated the character’s simpler, more lyric lines that in many performances get lost in the shuffle.

Best of all, she deftly avoided the cuteness that almost always afflicts performers of this part. Zerbinetta’s big solo amounts to a manifesto of sexual agency for women, heady stuff for a century ago, and Ms. Gilbert’s frankness and (from time to time) downright raunchiness made the text sound like it could have been written yesterday.

Once Ms. Gilbert left the stage, though, the focus turned solidly to tenor Shawn Thuris as Bacchus. His big, muscular voice easily scaled the role’s myriad of high B-flats, and, even better, he made Hofmannsthal’s allusive text sound like the poetry.

Among a generally excellent company, another standout was Alison Cheeseman, singing the passionate phrases of the Composer in a cool, slightly reedy mezzo aptly suggesting the voice of a young man still in his teens. The only letdown, in fact, was Alexandra Lang’s wiry tone in the title role.

Conductor William Remmers flitted through the score lightly and quickly, a superb solution for a performance in the tiny Lang Recital Hall. Benjamin Spierman’s direction underlined the comedy at the expense of sentiment, but if there were a few too many jokes they were almost all good ones.

I admit I approached this performance with a certain dread: there’s nothing more nerve jangling than badly played Strauss. It’s to the credit of this tiny company that I left the show feeling not only calm but also deeply moved.

Three nights earlier, the Werther demonstrated that too much mixing of media could result in an unsatisfying mishmosh. This staged concert piece devised by writer James Melo and director Donald T. Sanders melds spoken passages from Goethe’s romantic novella The Sorrows of Young Werther, with Robert Schumann’s song cycle Dichterliebe (A Poet’s Love) and a handful of other German lieder. The unsatisfying effect was perhaps similar to what the first audiences for Ariadne felt: too much talking for the music fans, and too much singing for the theater buffs.

In this tale of a young poet driven to suicide by his unrequited love for a married woman, actor Bobby Steggert played the title role with a heartbreaking simplicity and charm. Baritone Sidney Outlaw in the Schumann and mezzo Rinat Shaham in the other songs undersang so severely their voices lost quality. Eventually Ms. Shaham let her sound fill out, though, lavishing a rich throb on a version of Liszt’s “Liebestraum.”

Though the acoustic of the Thalia lent itself neither to speech or song, it did flatter the piano accompaniments performed deftly by Eve Wolf and Max Barros. But when the highlight of a theater piece is the quality of the piano tone, that’s a sure sign of a hybrid that missed its vigor. 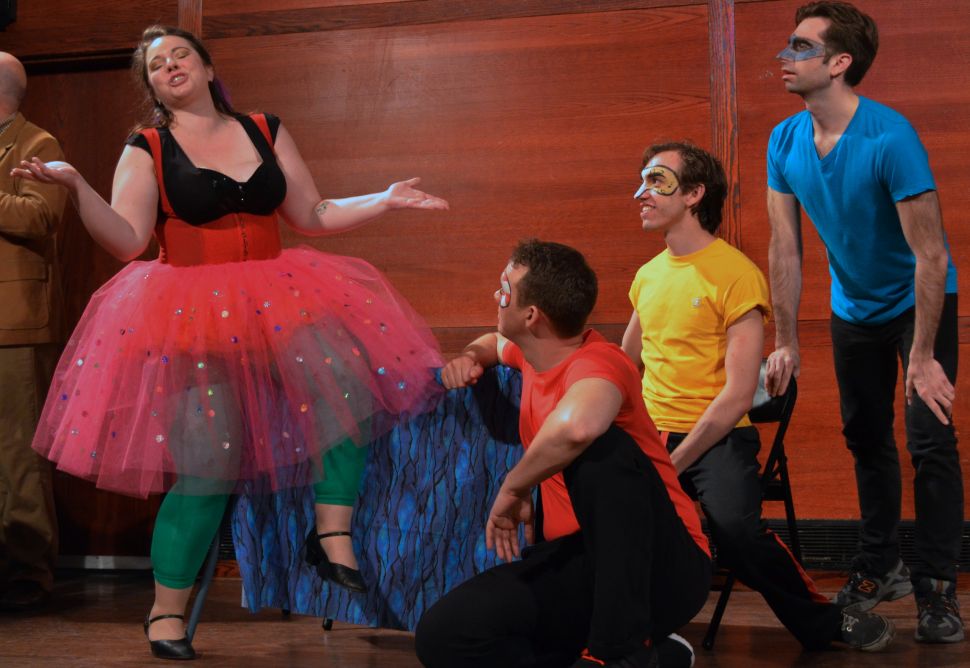