The story is familiar. A Muslim population that holds little political power is being mistreated, denied their rights and pushed out of land where their families have lived for generations. This time it is happening in a remote corner of a distant country where few Westerners have traveled. The treatment of the Rohingya minority in Myanmar is, however, a major human rights violation. A Human Rights watch report from 2013 states that, “The criminal acts committed against the Rohingya and Kaman Muslim communities in Arakan State beginning in June 2012 amount to crimes against humanity carried out as part of a campaign of ethnic cleansing.” Much of the recent coverage of this issue has focused on the question of Rohingya people fleeing Myanmar to neighboring countries such as Indonesia, Malaysia and Thailand, but the question of why they are fleeing should be recognized as well. For years, Rohingya have been mistreated in the Rakhine state of Myanmar, primarily at the hands of the Rakhine people, another of Myanmar’s extensive panoply of ethnic groups. They have been stripped of their rights, faced discrimination in employment, housing and the like and have even been interred in camps.

While most of the Rohingya are concentrated in one state of Myanmar, and have suffered largely at the hands of one ethnic group, the central government, and both of Myanmar’s two largest political parties have been all but silent regarding these crimes. The relative silence of the ruling Union Solidarity and Development Party (USDP) is not a surprise, given this party’s ties to the previous military regime and its poor human rights record. It is, however, more disappointing that the opposition National League for Democracy (NLD) led by Nobel Prize winner, and globally recognized human rights leader, Aung San Suu Kyi has said or done so little about the plight of the Rohingya.

The editorial board of the Los Angeles Times recently urged, ”Aung San Suu Kyi, Myanmar’s icon of peace, now a member of the parliament, to use her moral authority to speak out on the current crisis and denounce her country’s treatment of the Rohingya.” The Dalia Lama has also indicated that Aung San Suu Kyi has been reluctant to take a strong stance on this issue. “I met her two times, first in London and then the Czech Republ­ic. I mentioned about this problem and she told me she found some difficulties, that things were not simple but very complicated…But in spite of that I feel she can do something.”

The plight of the Rohingya has not attracted much attention at all. There are many reasons for this, but one is that Myanmar is not Israel and the Rohingya are not Palestinians. Myanmar is a majority Buddhist country emerging from a decades-long period of military rule and isolation from the rest of the world. It is home to some of the largest and most beautiful Buddhist temples anywhere and is far enough away from the Middle East that what is happening in the Rakhine state is relatively easy to ignore.

This is partially because the story in Myanmar is a little different from the usual narrative about mistreatment of Muslims who, as any reader of the European, and sometimes American, media is led to believe, seems to only happen at the hands of Israelis, and occasionally Americans, but not, despite ample evidence to the contrary, Buddhists. That is, depressingly, one of the reasons the Rohingya have received relatively little attention not just in the Western media, but from among an activist community for whom Israel has been a target for decades. The tired narrative of Israel being uniquely violent and oppressive that has been told for decades by some who are genuinely concerned about human rights, some who have no use for the Jewish state, and alas some who have no use for Jews at all, cannot be remotely applied to the Rohingya, so their plight is less interesting to those who believe this one-sided narrative.

The Rohingya situation and the Palistinian-Israeli conflict are not the same. The latter involves larger populations and considerably more violence on both sides. It is also more firmly couched in complex global political issues. The Rohingya for example, do not have a charter calling for the destruction of Myanmar or Rakhine state, comparable to Hamas’s stated goals with regards to Israel. It should be axiomatic that the world has enough compassion to care about Palistinians and Rohingya, but for many that is not the case. The Rohingya, victims of brutal repression, desperate for help from the rest of the world are learning, as many have before them, just how insensitive to suffering the world can sometimes be. They are also learning a perhaps more depressing lesson, that Muslims who get mistreated by Jews matter a lot more to the rest of the world than Muslims who suffer at the hands of anybody else. 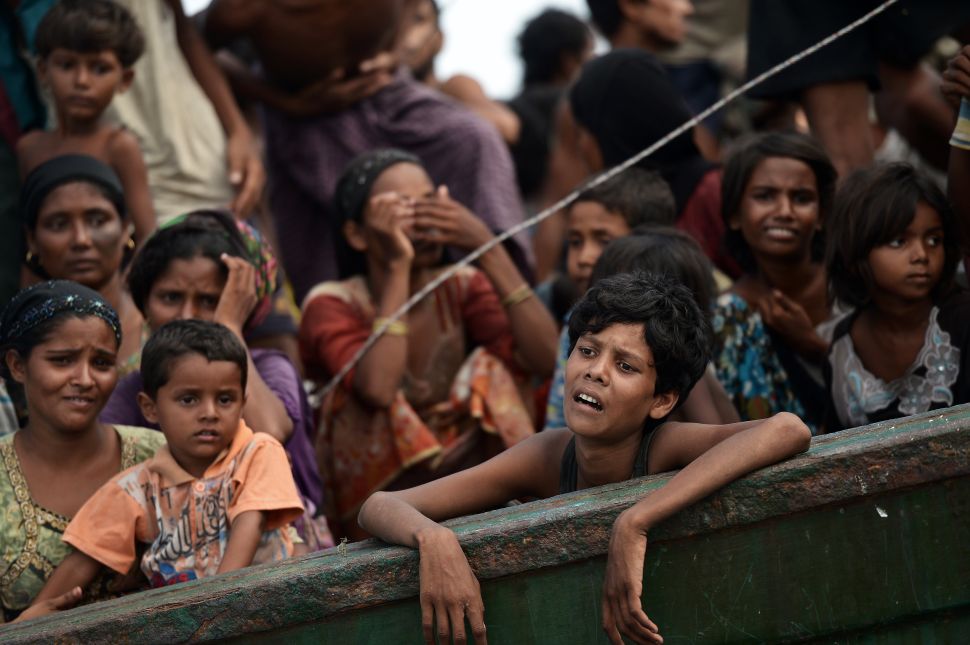