It is mysterious, particularly to American financial writers, why many on the Left—both here and abroad—seem not only willing to entertain the risk of, but are actually downright giddy at the prospect of the so-called “Grexit,” in which Greece would default on its international debts and leave the eurozone.

Certainly, there are good reasons to worry about a Grexit. “Should [the EU and the European Central Bank] press demands [for further austerity measures], forcing Greece to exit, the world will never again trust the Euro’s longevity,” Columbia economist Jeffrey Sachs tells CNBC. Instability! Cats lying down with dogs!

For us pro-Grexit types, the possibility of unsettling financial markets is overshadowed by the prospect of delivering a major blow to the globalization steamroller that has, in the eyes of American progressives and the Greek voters who brought socialist prime minister Alexis Tsipras to power in January (and could lead to his removal by angry leftists if he goes wobbly and endorses pro-EU austerity measures), eliminated millions of jobs, hollowed out the middle class, and widened the already increasing income chasm between rich and poor. For the Left, free trade agreements like NAFTA and the Trans Pacific Partnership (TPP), institutions like the World Bank and the WTO, and the European monetary union epitomize forces that have crushed the aspirations of working class and middle class people.

The globalization movement of the last 25 years was marketed as a blend of accepting the inevitable—if your country doesn’t open its borders to imports, other countries won’t be open to your exports, and international competitor nations will increase their sales instead—and a promise of relatively minimal dislocation.

While some jobs would leave the country, “outsourced” to cheaper foreign workers, new jobs would replace them and the social safety net would expand to take care of those who fell between the cracks. But remember Ross Perot warning in the 1992 presidential debate of a “giant sucking sound” caused by American jobs heading south? He was right. The liberal Economic Policy Institute has estimated that NAFTA alone has cost the U.S. at least 700,000 jobs and “strengthened the ability of U.S. employers to force workers to accept lower wages and benefits.” Proponents of free trade agreements point out that they lead to lower-priced consumer goods, but as economist Dean Baker of the Center for Economic and Policy Research wrote in 2013, “Lower prices are helpful to workers as consumers, but are not likely to offset the impact on wages.”

Unfortunately for the job losers at the time, the political class let social programs stagnate or shrink even while long-term unemployment kept increasing. “Trade theory emphasizes that those who benefit from free trade should be able to compensate those who suffer, making everyone better off. What trade theory doesn’t explain is why the beneficiaries would offer such compensation unless they are forced to do so,” Nancy Folbre, an economist at the University of Massachusetts Amherst, points out.

These resentments go back decades; in the United States, the sense that NAFTA began exporting American jobs to Mexico, and then from Mexico to China and Indonesia and Southeast Asia, was somewhat dampened by the economic expansion that started in 1994, but amplified after the dot com crash of 2000. That was when citizens of European countries were asked to approve the referenda that allowed the euro’s creation in 2002.

I’m born in the United States, and also have French citizenship via my mother. I voted no on the euro. But the French nationals I asked about it went along with it for vague reasons, most typically because monetary union was sold as “modern.” Few understood what they were getting into.

First came the disappearance of iconic currencies like the franc, mark and lire. Sovereignty was giving way to convenience; no more passport checks at national borders. Then came the realization that the euro was a marriage between economically incompatible partners.

Like the United States Federal Reserve Bank, the central banks of most European nations controlled money supply and set interest rates with the goal of keeping inflation and deflation at bay, but also stimulating the economy in order to reduce unemployment. Germany’s Bundesbank was an exception to the rule. Exceptionally politically independent, the Bundesbank only concerned itself with price stability.

The European Central Bank was modeled on the Bundesbank. “As a result, it is one of the world’s most politically independent central banks; its mandate is focused narrowly on price stability; it does not take broader economic goals like unemployment into account in the way other central banks, such as the Fed, do; and it is de facto more restricted than other central banks, since controversial measures can lead to complex political and legal struggles, involving 18 (soon to be 19) countries. Its setup and philosophy are therefore ‘German,’ that is, conservative and cautious,” wrote  Christian Odendahl of the Centre for European Reform.

Within a few years, poorer European nations like Spain, Italy and Greece — which had used deployed Keynesian stimulus to mitigate downturns in GDP, but no longer had that available to them—experienced a vicious circle of rising unemployment, reduced demand, and lower production. 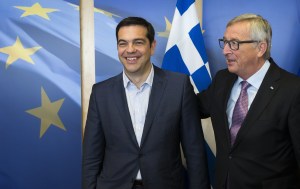 With 25.6% unemployment and national GDP down a whopping 25% since the start of the current crisis, all but the most militant free-marketeers agree that Greece desperately needs a big cash stimulus. In the German-dominated Eurozone, however, they won’t get one. To the contrary, Greece is being pressured to impose stricter austerity measures, shredding what remains of social programs, in order to repay previous bailouts.

No wonder the Greeks want a divorce from the euro.

Greece is a microcosm of a global phenomenon. The elimination and reduction of trade barriers that drives globalization creates a massive imbalance in the labor market in favor of the demand side.

Capital–the demand side of the marketplace in which workers sell their labors to employers–has become increasingly fluid. But workers are trapped by national borders, language barriers, and cultural and familial ties. Inevitably, this state of affairs benefits the management half of the labor-management negotiation. Wages fall; benefits are eliminated.

Depending on your business, you may be able to offshore your production or other costs. For example, you can hire a customer call center in the Philippines, where over 1 million people, typically earning about $700 a month, serve such American companies as Citibank, Safeway, Chevron and Aetna. You can have your sneakers manufactured in Vietnam, your cars in Uzbekistan.

Workers don’t have nearly that kind of flexibility.

You can’t just pick up and move to, say, Switzerland, without a work permit. That requires a European Union passport. Even if you have a European-born parent, which often entitles you to that work permit, are you really going to pack up and go? Leave your friends and family behind? How’s your French? Your German?

You might not be thinking about this, but if you or someone near and dear to you lost a job recently, whether directly or indirectly due to free trade-related globalization, you probably are. It’s a process, currently highlighted by the Senate approval of the TPP, in which those who perceive themselves as victims have felt entirely helpless. Regardless of how hard you work or how smart you are, you had nowhere to turn to, no political party to stand up for you, no government program to ease the pain of disruption and dislocation.

Will the Empire strike back? Some predict the collapse of a new drachma followed by political instability, even a military coup. Others say the real threat is to the euro: that post-Grexit Greece would impose capital flight rules, let the banks fail and then thrive, which would prompt other stressed economies (hello Spain and Italy) to fly the coop. The latter scenario is what happened in Iceland, sort of, after the 2008 global financial meltdown: the government bailed out the people, let the banks collapse, controlled capital flight and snubbed entreaties to join the euro.

No one knows what will happen. But when people are miserable, desperate and see no hope for improvement under the current regime, they’re more likely to take their chances with something new than to keep on keeping on.

If you’re one of the many millions of Americans who believe you’ve lost ground to globalization, a Grexit would be a chink in the armor of a relentless force that has made your life miserable, perhaps even the beginning of the end of a system which has given you little or no thought whatsoever. That has to make you shout opa! 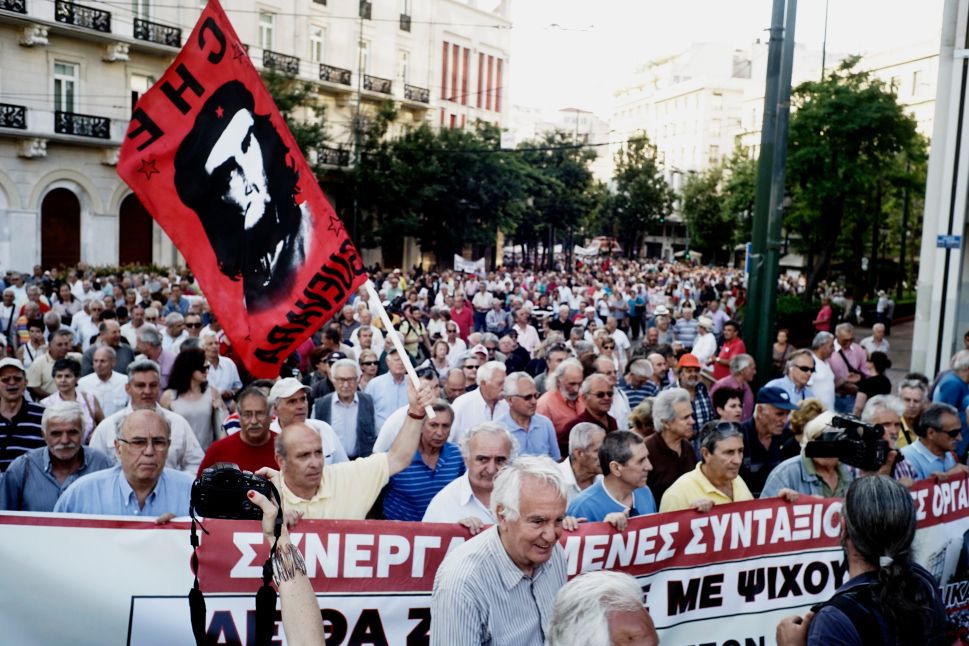