A harmonic convergence of sorts took place on Tuesday, June 16th, when neuroscientist Richard Davidson, a pioneer in research on Buddhist meditation and the brain, and psychologist Daniel Goleman, author of A Force For Good: The Dalai Lama’s Vision for Our World, out next week, met with French Tibetan Buddhist monk Matthieu Ricard, before an audience at St. John the Divine in New York to discuss Ricard’s new book, Altruism: The Power of Compassion to Change Yourself and the World.

Mr. Ricard first came to prominence some fifteen years ago with his international bestseller The Monk and the Philosopher, a dialogue between himself, a promising biologist-turned-Tibetan-monk, and his father, Jean Francois Revel, an aging lion of secular French intellectualism. Mr. Ricard hit another level of pop renown as the star subject of Mr. Davidson’s groundbreaking research measuring how long-term meditation could change the structure and the function of the brain as revealed in functional MRI images. Mr. Ricard’s brain showed the most gamma wave activity, associated with the positive emotions, and so the media dubbed him, “the happiest man in the world.” These days, an equally accurate moniker might be, “the hardest working man in Buddhism,” or possibly, outside the Dalai Lama, the best connected one. Besides the St. John event, Mr. Ricard discussed his book with ubiquitous Buddhism-booster Richard Gere at the 92nd Street Y two days earlier.

Then Monday afternoon, June 15th, he continued with a talk moderated by Arianna Huffington, part of a lecture series at AOL in NoHo. (She recalled that Mr. Ricard had once taken her on a “fantastic mountain walk culminating in a meditation with our eyes open.”) He ended the day with a similar presentation at the Rubin Museum of Art, and he closes out his cavalcade this Friday with an 8 a.m. call to altruistic enlightenment, a discussion with the U.N.’s Ray Chambers and Darren Walker, the President of the Ford Foundation, at the Joseph Urban Theater at the Hearst Tower.

So what, in god’s name, is so important about altruism? According to Mr. Ricard, everything. In his previous book, Happiness: A Guide to Developing Life’s Most Important Skill, he mines traditional Buddhist wisdom to come up with a conception of happiness rooted in something deeper than the egoistic craving for money and power. Altruism is, in his view, the fast track to achieve that happiness, putting concern for others on a more equal footing with our own wants and needs. That sounds like a virtuous plan, but dutiful, maybe even a little painful. Mr. Ricard says, au contraire, that’s what makes us happy and if you don’t believe him, check out all those fMRIs of meditators who’ve spent years sending out compassionate thoughts to the world. “Selfish happiness is bound to fail” and “The universe is not a mail-order catalog for your desires” are two of the talking-point flourishes.

The reason why Mr. Ricard’s new book grew to such doorstop proportions, 848 pages including copious reference notes, is that altruism isn’t just a self-help prescription (that he could have probably managed in a mere 300 pages), but a prescription for a crowded planet. If we don’t start cultivating altruism and temper our consumption of the world’s natural resources, he warns, we’ll confirm expert predictions and wipe out one-third of the Earth’s species by 2050. When I catch up with the shaved-headed red-and-saffron cloaked monk before the Ruben lecture, he says, “Some experts think, ‘game over.’ So yes, we’ll survive as a species but at what cost?”

As a Buddhist, he says, he’s in the business of self-transformation–changing your life by training your mind. (The Buddhists call that meditation; the neuroscientists call it “neuroplasticity.”) Shouldn’t a global transformation along more altruistic lines, better for the environment, better for the have-nots, be at least conceivable? That’s why he makes the rounds at venues like the World Economic Forum in Davos (rubbing shoulders with the likes of Ms. Huffington). The counter-argument is that people are driven to look out only for number one, “the selfish gene” and the like, which Mr. Ricard, the ex-biologist, does his manful best to dismantle in the pages of Altruism. “It doesn’t stand up to logical analysis and there is not a shred of scientific evidence to support it,” he says, a model of Gallic certitude.

Closer to home, he’s been impressed with the compassion showered on Nepal after the April earthquake. In the midst of his book tour when the quake hit, he says his first reaction was to return to his monastery in Nepal, Shechen Tennyi Dargyeling. “That was Saturday,” he says. “By Monday, I’d raised one million euros by going on fifteen TV stations. When I could finally communicate with my people in Nepal, they said, ‘we are doing fine managing ourselves, why don’t you stay and continue.’” 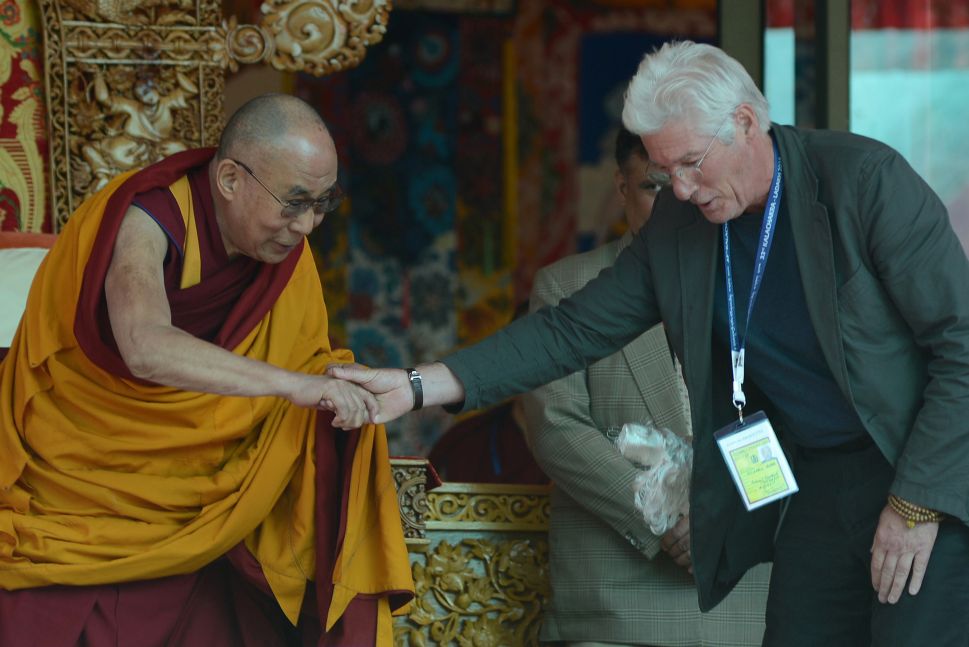