So far, I’ve been giving Aquarius  3 out of 5 stars, but intend to continue watching and see where it ends up (will fictional character Emma Karn help Susan Atkins murder Sharon Tate?!). In the meantime, will somebody please create a show that focuses on an elaborately evil cult with literary tendencies? I would appreciate it if this to-be-created show deeply explores the topic of cult mentality, and it would be just fantastic if Edgar Allan Poe could have at least one cameo. I think what I’m suggesting is Jonestown set in a 19th century library, is that really too much to ask for?

In 2013 I began a love affair with FOX’s “The Following”. It had all the fixings you would want from an affair: excitement, weirdness, twisted and passionate bloodshed. Okay, okay, so I have a dark streak, but that’s not the only factor that made this show so perfect for me. In addition to having a fascination for the dark and morbid, I’m also a big fan of anything to do with cults or romantic literature, both of which were the main focus of “The Following”’ season one.  Imagine my absolute delight at discovering a show about a murderous cult that uses Edgar Allan Poe’s stories as inspiration to kill. If human beings married television shows, I would have made “The Following” my bride. Sadly, spoiler alert, most love affairs wilt and wither, and so did mine with this Fox thriller. And so, like with many relationships gone bad, I’ve played it over in my mind, trying to figure out where it all went wrong. Here’s what I’ve learned from my toiling:

I know exactly why I loved “The Following”; watch as these reasons slowly fade away and are replaced by stereotypical, basic cable drama:

CULTS: English professor Joe Carroll runs a cult of troubled, weak-minded individuals whose brains are begging to be molded. He manipulates them to worship him and the word of Edgar Allan Poe, he has them believing that death is equal to beauty and teaches them how to harness their naturally murderous energies into artwork. He preys on those who have endured traumatic pasts and becomes like a father figure to them. These psychopaths will do anything for him.

EDGAR ALLAN POE: Joe Carroll uses themes, symbolism, and imagery from the works of Edgar Allan Poe to inspire his murders and his vision. “The Lighthouse”, “The Raven”, “The Telltale Heart”, and “The Black Cat” are all frequently visited, explored, and perverted in season one. It’s just like being back in a Freshman English course (also known as one of my favorite points in life)! On top of all that, his gaggle of psycho killers wear chilling Edgar Allan Poe masks while going about their artwork/murder sprees.

CHARACTERS: Season one has some wonderfully messed up characters that were a train wreck to watch. Sure, we have alcoholic FBI agent Ryan Hardy played by Kevin Bacon, but he is the least of the fun. Joe Carroll’s season one followers are rare specimens: Emma, who stabbed her verbally abusive mother to death, Jacob and Paul who pretended to be harmless gay neighbors for three years in order to gain the trust of med student Sarah Fuller and help Joe Carroll gouge out her eyeballs upon his escape from prison, and many more with equally demented dispositions. There is no shortage of psychologically complex, damaged, and intriguing characters here. Sadly, the majority of  them are dead by the end of the first season.

CULTS: Joe Carroll’s cult falls apart after all his remaining followers think he is dead. When they learn he is not dead, they rejoin clumsily and get absorbed by a new cult, called Korban. Spoiler alert: everyone in Korban dies by the end of season two.

EDGAR ALLAN POE: He’s gone! It’s like Joe Carroll forgot why he started murdering in the first place. I found the absence of constant, misinterpreted Poe quotes to be distracting. Now instead of Edgar Allan Poe masks, the followers wear Joe Carroll masks, which are just as creepy but not as cool.

CHARACTERS: In addition to Korban founders Micah and Julia, we now have billionaire murderer Lily Gray and her orphan twins Mark and Luke, who have a penchant for killing people and then propping them up as if alive and carrying on one-sided conversations with them. Although this season’s presence of Edgar Allan Poe is lacking, the cult factor is still high and the characters are still strong. In other words, I was disappointed with the literary neglect of season two, but still optimistic about season three.

CULTS: With all members of Korban dead and Joe Carroll on death row, the show no longer features a cohesive cult. Sure, there are remnants of cults drifting about, but not enough pieces to put together and create one whole cult.

As the seasons unfolded, “The Following” got farther and farther away from the lovable creation it once was: A uniquely gory thriller about cults and Edgar Allan Poe. By it’s end, “The Following” was a show with no followers on either side of the television screen, if you know what I mean (no cult followers in the show and also no one was following the show anymore, see what I did there?). Season one started and ended masterfully, and I wish with all my heart they would have wrapped it up then and there. But of course, most networks don’t know how to let a show die, and insist on hooking it up to life support while it painfully disintegrates into something hard to look at.

Luckily for me (and anyone with a TV!), there is a new cult in town. Or, rather, an old cult that most likely inspired Joe Carroll’s band of literary murderers in the first place. It’s the Manson Family, my second favorite cult of all time, right after Jonestown!

NBC’s new drama “Aquarius” features David Duchovny as he tries to track down notorious killer and cult leader Charles Manson. Unfortunately, after watching five episodes, it seems that “Aquarius” will not be the magical show to fill the cult-related void in my entertainment schedule. Why? Because it is more about 1960s politics and Detective Hodiak’s unclear mission (played by Duchovny), than the Manson Family or the overall nature of cults. However, here is what the show does have going for it, and why I will use it as a temporary cure while my heart heals from the whole “The Following” fiasco:

CULTS: Charles Manson is notorious for seducing and brainwashing vulnerable young people. He preached that society is evil and oppressive, he taught his followers to get revenge for themselves and to fight the system. He masked his violence and profound anger in the guise of love and family. His “family” loved together and killed together, with Manson pulling every string. How anyone could get on board with this life is the ultimate, unanswered question that keeps us mesmerized by the Mansons to this day. What is the formula, the cocktail of nature, nurture, and LSD that could drive someone into a life of forced polyamory and mass murder? “Aquarius” gives us some insight through baby-faced Emma Karn, as she strays from her family and gravitates towards charismatic Charlie and his clan.

EDGAR ALLAN POE: Keeping an eye out, but I haven’t seen him make an appearance yet. I fear Poe may have used up his fifteen minutes of TV fame, but a girl can dream. “Aquarius” DOES reference The Beatles, Cindy Lauper, and a few philosophers, but it’s just not the same.

CHARACTERS: There are some pretty solid characters. Not many, but some. Emma Karn, young runaway. Charles Manson, charismatic psychopath. Ken Karn, twisted Politian and terrible father. Grace Karn, confused housewife. Bunchy, Black Panther revolutionary. Sam Hodiak, alcoholic detective with suppressed emotional issues (just like Kevin Bacon in “The Following”!). Yes, the characters of “Aquarius” are worth watching, but at episode five I’m still not all that invested in them. Perhaps this is because despite being technically interesting on the surface, they don’t have any heart or soul and therefore keep the show’s stakes perpetually low. 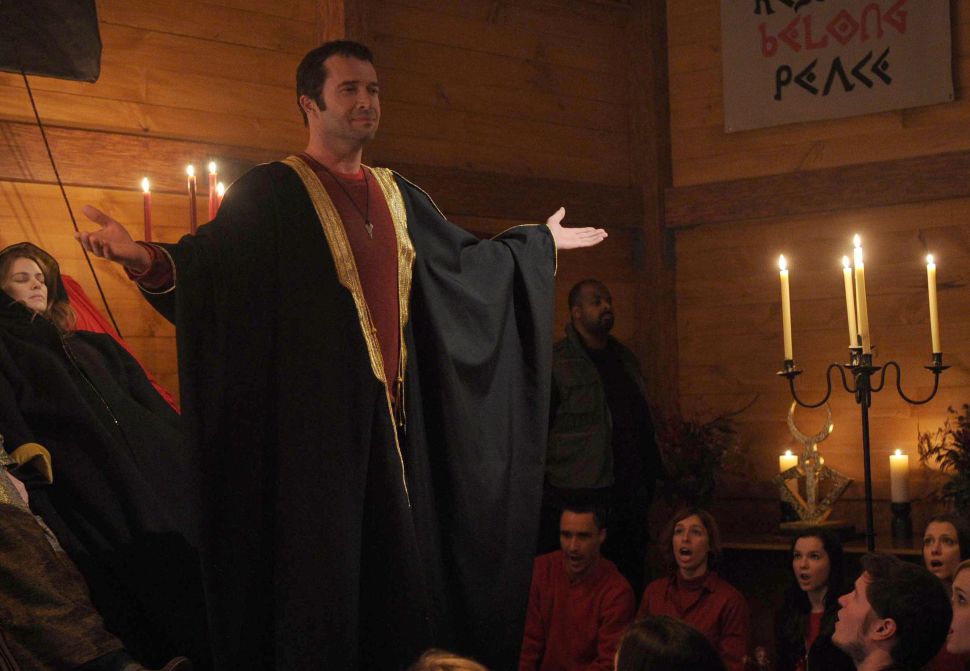