The FIFA corruption scandal evoked an immediate reaction reminiscent of Claude Rains in Casablanca: “I’m shocked, shocked to find that gambling is going on in here.” At FIFA, the issue is not gambling, but bribery. The whole damn thing runs on payoffs and everybody with any interest in world soccer knows it.

At first we were tempted to compare the FIFA mess with “Deflategate.” But corruption and cheating are quite different. The FIFA corruption scandal seems to exist outside the sport itself (though playing conditions in Qatar may favor certain players over others.) Here, the officials’ motives were personal greed. That it involves soccer is almost incidental. Soccer just happens to be the horse the FIFA gang rode in on.

Our second thought was to compare Sepp Blatter, who resigned suddenly Tuesday afternoon, to Roger Goodell. But that too was inappropriate. The NFL commissioner is the employee of the team owners and does their bidding. The relationship of soccer clubs and FIFA is the reverse, with the power residing formerly with Mr. Blatter.

It was then that we heard the most thoughtful and intriguing insight about the FIFA scandal: perhaps it parallels and presages a cleanup of the United Nations.

The parallel—and call for a full-blown housecleaning of the UN—came from New York Law School professor Robert Blecker, a former anti-corruption prosecutor and author of the forthcoming book, Cheating: Playing with the Rules. “Theft—delegates taking and squandering money designated for alleviating poverty and disease—is widely recognized by anyone who has had the slightest dealings with the UN. When you’re the only game in town, and town happens to be the world, you think you’re untouchable. But sooner or later venality and corruption, whether in sport, politics, or charity gets exposed and punished.”

The bill of particulars against the U.N. is a long one:

The UN’s oil-for-food program in Iraq was rife with kickbacks. Russia makes more than $1 billion annually providing aircraft to the UN while simultaneously evading financial controls and oversight. UN Peacekeepers in Sierra Leone were accused of smuggling diamonds, along with other misdeeds in the Congo, Kosovo and Liberia. And both the “Cash for Kim” (North Korean dictator Kim Jong Il) and the diversion of aid for Palestinians total billions. More than 25 percent of those funds come from the United States.

There was little nexus for the United States attorney for the Eastern District, Loretta Lynch, to focus her sights on FIFA. But she did, and it looks like she buried one in the back of the net. We hope as the new attorney general she will now turn her attention to Turtle Bay. 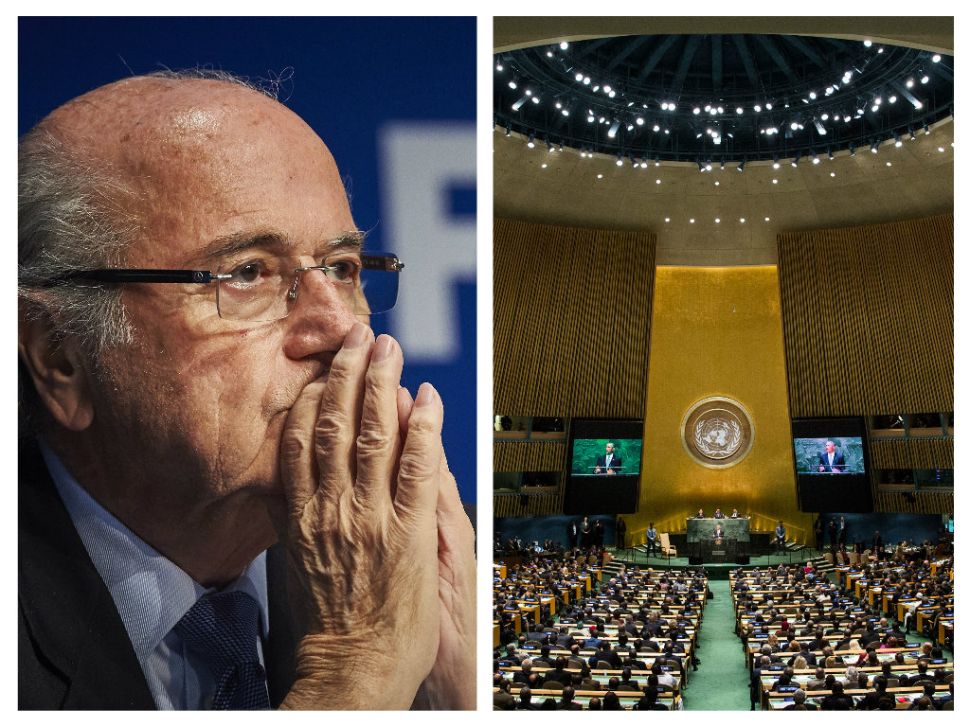