Will the world end this week? Possibly. Not positive, but pretty sure. The constellation of cosmic and everyday events seems right. “Weekend of fear in Greece as Monday brings salvation . . . or ruin,” reads one headline. Others follow: “Grexit ‘beginning of the end for Eurozone,’” “‘Last days of Pompeii’ as crunch time approaches.”

“Financial historians may look back at the events of next week and wonder how Europe’s financial unravelling was permitted,” writes Lawrence Summers, Bill Clinton’s Secretary of the Treasury and later president of Harvard.

I’ve been watching this for twenty years now and have come to this moment. Things break, money crashes and as economies shrink just an inch poverty and mayhem advances. Wars ensue. All at once that which you always assumed to be true no longer appears to be, and it becomes increasingly apparent that our basic assumptions were false all along.

‘Twas ever thus at the end of the world.

The signs are plentiful today; the fall of the Twin Towers marking the first year of the millennium, the rise of Israel, the widespread, global anti-Semitism.

I’ve come to the conclusion long ago that the fire this time would not be external like the last time which brought the destruction of Europe from 1914 to 1946. This time it will be internal; for Europe, for the West, for America.

The signs are plentiful today; the fall of the Twin Towers marking the first year of the millennium, the rise of Israel, the widespread, global anti-Semitism. Again. More likely the age will rise this time in Jerusalem as the millennial sun cycle awakened the last time in Bethlehem. That, say Europe’s old gnostic poets and Israel’s bearded prophets is what they do. Possibly that is why turmoil arises today on Temple Mount, the jewel heart at the very end of the long historic journey known to Jews as “the return.”

Signs in heaven, signs following. And perhaps this statement spoken not long ago by Moshe Feiglin, Israeli folk figure, Jewish advocate and former Knesset member is relevant: “The exile is over.” For when the Jews return to Israel, it has long been claimed by said poets and prophets, the millennium awakens.

There are symptoms here as well. Americans have lost faith in the Presidency, in Congress and the Courts corrupted each by populism, money and partisanship. American power today instead begins to advance contention between governors and big city mayors; classic contentions – urban against rural, North v. South, New York v. Texas, the formidable New York Mayor Bill de Blasio, increasingly linking the big cities to Washington direct, likely to find increased contention with the formidable Texas Governor Greg Abbott and his new posse of heartland governors increasingly repudiating Washington’s influence via the Tenth Amendment and other means.

“The Hill” reports that state legislators around the country have introduced more than 200 bills aiming to nullify regulations and laws coming out of Washington, D.C., as they look to rein in the federal government.

Our own Wise Old Man from Vermont, Bernie Sanders, fairly counsels, “I think rural America needs to understand what urban America feels. Urban America needs to understand the culture of rural America.” But he is alone in this. Otherwise, each here to the other declares, “J’accuse. . . !” One of these two, de Blasio or Abbott, may rise to dominance – perhaps conquest is the correct word – in the lifetime of Millennials.

Just one vicious, savage nudge now and everything could fall apart, as it did when Gavrilo Princip killed the Grand Duke. Like when a lone gunman terrorizes a historic African-American church killing nine in prayer in a pure act of political terror. If it suggests anything, it suggests a feral, unsettled and dangerous disquiet which haunts the very roots of our uncommon American condition every day.

Suddenly, the expansive, globalist model of American capital is passe. The world beyond our borders is beyond our reach.

But the fall said to occur next week is because the Greeks are fighting with the Germans and will soon leave or be thrown out of the Eurozone, which threatens to unravel the world like a cat toying with a ball of yarn. Thus the dire predictions; poverty, anarchy, decay and squalor. But what I find more interesting is this perceptive thought from Tim Worstall, a contributor to Forbes who has ideas on economics, finance and public policy. He wrote in Forbes in March:

“As I’ve been saying for some time now the biggest threat to the continuance of the euro is not that Greece might leave, but that it might leave and then thrive. At which point people in Italy will indeed be asking, well, why do we have to suffer all this pain when we could just bring back the lira? And it is Italy that is really suffering most from the euro of those two countries mentioned, Italy and Spain.”

Which is to say that the world may not be dying after all. It may be about to be born again.

Suddenly, the expansive, globalist model of American capital is passe. The world beyond our borders is beyond our reach. “Europe” as Bismarck claimed, is an illusion. Small is beautiful. Secession is acceptable and nullification is rampant.

The “second great political trend of the age: devolution” forecasts the world ahead according to a recent report to the CIA. Scotland, Venice, Catalonia, Texas, Vermont, northern California and even Wisconsin have all shown symptoms.

“Devolution is even happening in China,” writes Parag Khanna in a New York Times article, “The End of the Nation State.” “Cities have been given a long leash to develop innovative economic models, and Beijing depends on their growth. One of the most popular adages among China watchers today is: ‘The hills are high, and the emperor is far away.’”

In Greece it may be said as of Monday, we are seeing the future. And maybe this time it will work. 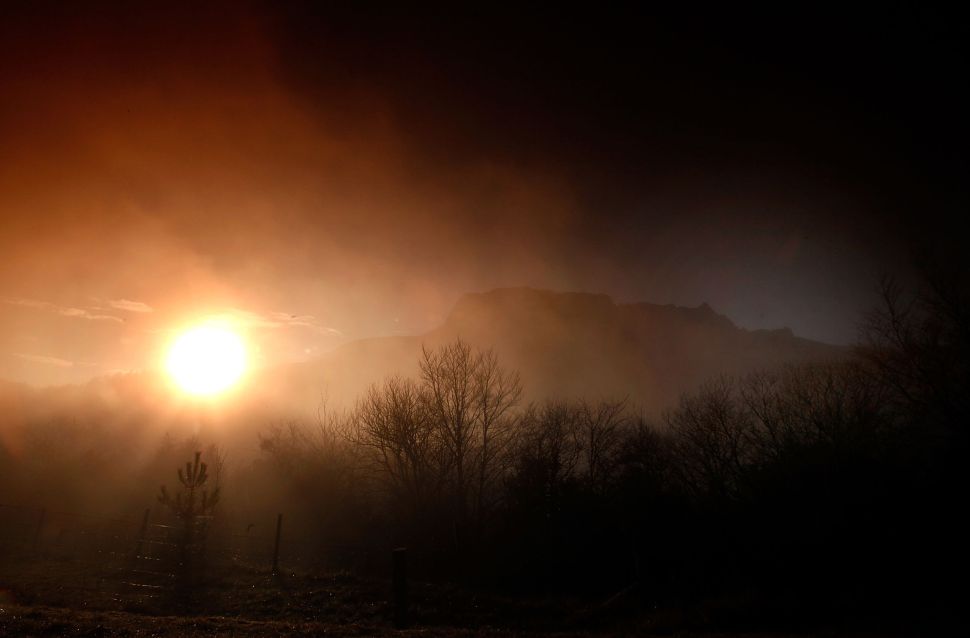