“We are going to watch the sunrise together,” Yoko Ono told a mostly young and black-clad crowd in the Museum of Modern Art’s atrium on a densely foggy morning Sunday. Dancing and chanting “sunrise,” while sporting a flower-bedecked pale fedora, she was lit in the darkness by rows and rows of iphones held aloft.

Ms. Ono was greeting the dawn with a couple hundred of her closest friends (including Klaus Biesenbach). The event, for which the museum opened at 4:30 a.m., was in honor of both the summer solstice and the current show of her early work at the institution, “Yoko Ono: One Woman Show, 1960–1971.” (The $22-per-ticket event, which was organized under the umbrella of the museum’s PopRally music arm and also featured a performance by Blood Orange, sold out quickly.)

Thankfully, Illy Cafe, primary sponsor of the Ono exhibition at MoMA, served the crowd coffee. Several attendees who lined up to get some noted they hadn’t yet gone to bed for the night. A chief topic of discussion was news that MoMA had just added the rainbow flag, symbol of the LGBT movement, to its design collection along with, among other highlights, the @ symbol.

Illy was celebrating a collection of espresso cups and saucers made by the artist for the company. (Artists from Robert Rauschenberg to James Rosenquist to Jeff Koons have designed the rabidly collected sets). Hers features six broken-and-repaired cups with the dates and places of tragic events, ranging from the bombing of Hiroshima to the day John Lennon was shot and killed in 1980. A seventh unbroken cup represents hope.

The sunrise event, taking place the longest day of the year, was called Yoko Ono “Morning Peace 2015” and similar events took place in several museums and cities around the world, including the Getty in L.A. and Istanbul, prolonging the event for 24 hours. 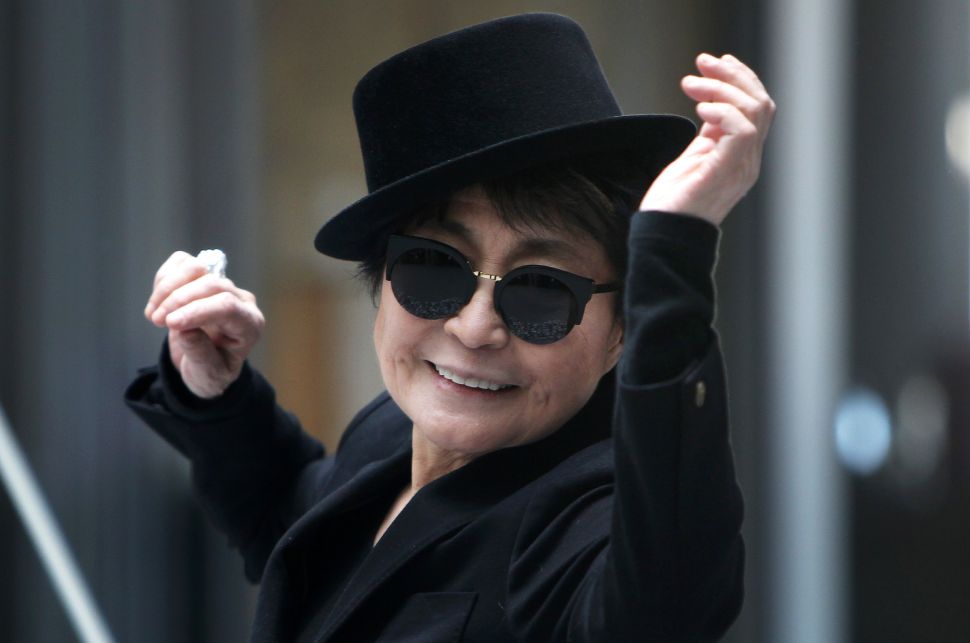