From prolific novelist James Patterson, Zoo is a global thriller about a wave of violent animal attacks against humans sweeping the planet. A young, renegade American zoologist spends his days running safaris in the wilds of Africa when he begins noticing the strange behavior of the animals. As the assaults become more cunning, coordinated and ferocious, he is thrust into the race to unlock the mystery of the pandemic before there’s no place left for people to hide.

Executive Producer Jeff Pinkner compares the series to Hitchcock’s classic thriller The Birds. “It’s like that, only across the whole animal kingdom in that the animals have just had enough of us and are saying, ‘no more.’”

About crafting the series using Patterson’s novel, Pinkner says, “Well, adaptations are always tricky and fun at the same time. When we first talked to James, he said, ‘the book exists’ meaning that the book will remain unchanged but that it’s there as a foundation. He created the spark and inspiration but the book takes a narrative approach we didn’t want to take with the series. We wanted to take the truth of the book and the characters that he created and move them in a different direction. So, the book serves as a jumping off point, but the trajectory diverges very quickly.”

As for Patterson’s involvement in the series, Pinkner explains, “He’s a benevolent Godfather. He reads everything and watches everything and gives us loving suggestions. Many of them are very good, and some we disagree with. It’s an ongoing dialogue that works well.”

Viewers looking for a new series to lack onto will be happy to hear that Zoo isn’t slated to be a one season and done entity, says Pinkner. “What’s attractive about TV is that you can tell a story over a long period of time and really explore characters. This show is about how this journey with these animals is really changing our central characters and you really want to do that over time. In fact, we pitched this as running at least five seasons. Each season will be like its own chapter with a beginning, middle and an end and each one suggests the one that comes after it.”

Pinkner admits that working with the animals was difficult but interesting as well. “Producing a show on this scale with all of these animals was a big and unique challenge. The animals made it a new wild card – no pun intended at all,” he says with a laugh. “That’s just really what it was in this case. But, I will say that it was always very entertaining. No matter how well trained an animal is it’s still unpredictable. You yell, ‘Action!’ and you turn around and the bear’s asleep. That happened more than once. We have a 70/30 ratio of real animals to computer generated animals and having real animals on the set keeps things very authentic. The emotion in the actors’ eyes is very real; they’re not acting in fear. There is actual fear there. We know it’s a safe work environment but it’s still an 800 pound bear that you have to work with, so you have to be respectful.”

Because there is no procedural element to the series, Pinkner says this allows for a shift in the genre each week. “Some shows have a template – they do some version of the same show every week. That can be very comforting in a lot of ways. The shows I like to work on, like Lost and Fringe — purposefully do not have a template. Because of that, we have to figure out what kind of show we’re doing each week. So, some episodes have more action, some are character studies, some are more suspense thriller, some are more adventure oriented. It’s one of the things that will make the show fun to watch — because you never know what you’re in for week to week.”

Given that the series features hostile animals, Pinkner knows that the subject matter could upset some viewers. “I can assure everyone that we’re all animal lovers on the show. Oddly, it’s a very animal-centric show. I don’t anticipate any backlash. I wouldn’t be shocked, but I don’t anticipate it happening.”

Pinkner did anticipate some resistance from PETA, but says, “I think the world is such now that we were trusted to be treating the animals with respect and we absolutely do just that.”

A bit surprising to Pinkner is how game his actors have been throughout production of the series. “It’s been interesting to see which animals frighten them and which ones they’re ok with, but having said that, this was a hard show to make and everyone really rose to the challenge. That part shouldn’t really be surprising, because we all know that when people love doing something they go all in and give it their all and the actors certainly did that here.”

The animals did provide many light moments on set, says Pinkner. “One of my favorite incidents was with this big bear. The bear was supposed to open a refrigerator and the fridge wouldn’t open so he ended up pulling it over instead and when he did that he went screaming from the set,” Pinkner laughs. “We left that in the show because it’s so real. Animals do what they want when they want and that certainly leads to a lot of unexpected, but yet, happy accidents.”

When asked about his favorite animal to work with, Pinkner offered, “We had a lynx cub that was just beautiful and we worked with these wolves that looked what I would call ‘stunningly noble’ and we had this amazing bear, so it’s really hard for me to pick one animal. I will tell you that I have always been terrified of snakes and I still am, but that didn’t lessen my fascination with them when they were on set.”

Pinkner wants people to know that Zoo isn’t simply a horror series with animals. “This is not just the ‘animal mauling of the week.’ It’s a lot of things – scary, exhilarating, charming, funny, and surprising. Expectations will be delivered o, but I think there is a very surprising element to it. “

He goes on to say, “If people watch this they will start fundamentally to view our place in the animal kingdom a bit differently in a way that will be both surprising and maybe a little be daunting. This series might just change a lot of people’s attitudes about our place in the pecking order. Yes, that’s a pretty big statement, but this is a very powerful story. Just watch and you’ll see what I mean.” 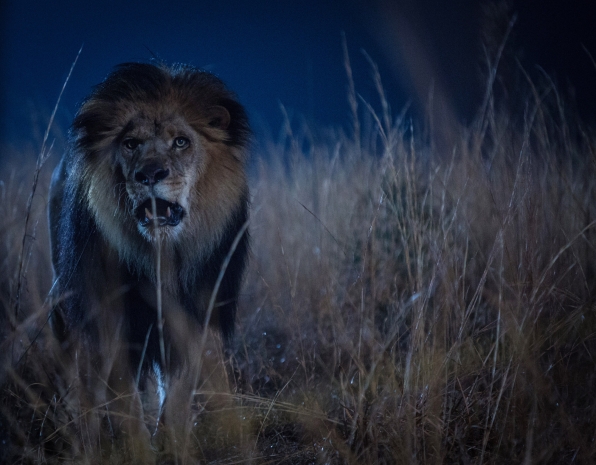