Like any omnipresent overlord, Apple has a plan for us. All the data it collects from our user settings, our Internet preferences and our organizational habits is not for naught—every Apple user will tell you they’re perfectly happy with their experience. And when you look at the digital music market, the extent to which Apple understands its customers is no coincidence. Apple has a plan for us.

We get the sense that Apple’s long game isn’t about innovating the music industry so much as evolving that industry to fit the Apple brand.

There are actually two plans for subscribing to Apple Music—a single user option for $10 a month and a family option for $15 a month that six users can share between them. Those subscriptions give you access to Apple’s radio stations, Apple’s streaming music library, and Apple Connect, a kind-of social media interface to share multimedia content and updates. Not one of these facets is totally new—all have existed in some form or another via other services like Spotify, Pandora, etc. But after spending one week with this service, we get the sense that Apple’s long game isn’t about innovating the music industry so much as evolving that industry to fit the Apple brand.

Take Apple Radio for instance, which, like Pandora, lets users choose an artist they like, then creates a station featuring similar sounding artists and related projects as determined by a predictive algorithm. Apple debuted this feature first as “iTunes Radio” back in 2013, but now the radio is sort of the staple piece of Apple Music. Apple Radio’s flagship channel is Beats 1, named for Dr. Dre and Jimmy Iovine’s Apple-owned Beats.

Through also co-opting the idea of Sirius Radio’s celebrity-hosted radio hours, Apple’s Beats 1 channel also features an ever-growing, rotating cast of famous hosts. Apple hired BBC Radio 1’s Zane Lowe back in February, providing those in-the-know with a hint of things to come—dude’s one of the biggest DJs in the world, with a penchant not only to play an eclectic mix of genres that Apple can easily migrate over to its global brand, but also for his cheeky, hyper-aware banter between songs, too.

But this being Beats 1, perhaps it was inevitable that Dr. Dre, the man who put Beats on the map in the first place got his own show too. Dr. Dre’s “Pharmacy” launched on July 4, apropos of his low-quality Beats Pill portable speakers. Over the course of two hours, Dre reasoned that hosting a radio show was a natural next step for him, plugged upcoming N.W.A. biopic Straight Out Of Compton, and played a bi-coastal, generation-spanning playlist of quality hip-hop.

But it was in his homage to the late J-Dilla, the great Detroit MC who died of a rare blood disorder at 32, that seemed simultaneously poignant and a distasteful attempt at branding.

Whether Dre will continue to spout his “writing a prescription” line on subsequent broadcasts is unclear, but the correlation to both the name of his show and his product line isn’t all too subtle. Remember, the Beats brand is important to Apple, not just the old Beats Music streaming service but its whole line of high-priced, shitty-sounding headphones and speakers, too. Also not subtle is the fact that his show premiered on Independence Day, which ought to push the multitudes of Dre fans who missed that first broadcast to make sure they’re tuned in for the second.

That’s the other thing. While the playlist from each show is available after that show’s broadcast, those hoping to catch the host’s banter need be listening live (or find a way to rip it.) These Apple people are good.

‘Dre and Run The Jewels means that all hip-hop lovers are welcome. Not only old-school, not only hip-hop’s golden age. Not just today’s crap and not just today’s brilliance, but all of it.’

Beats 1 also has the brilliantly subversive indie-hip-hop duo Run The Jewels hosting a show, too, appropriately titled WRTJ. MC Killer Mike is particularly savvy to talk politics and not shy speak his mind, so time will tell how that plays out. In a glorious act of vertical integration, Apple Music curators Pitchfork announced the new show with a preview in which the two MCs debate whether unicorns or dragons are nobler creatures. Here’s to hoping that the Apple brand doesn’t soften these guys up too much.

Former Apple employee David Cox told the Observer that Beats1 knows exactly what they’re doing. “They surely are flexing a hip-hop vibe but not because they can,” said Mr. Cox. “I think Dr. Dre is synonymous with taste and talent, so it adds legitimacy to Beats 1.”

“Dre and Run The Jewels means that all hip-hop lovers are welcome. Not only old-school, not only hip-hop’s golden age. Not just today’s crap and not just today’s brilliance, but all of it.”

All of it, indeed. Beyond just the radio feature, Apple Music’s searchable catalog runs the musical gamut, featuring super-specific playlists that send Spotify’s featured playlists a giant middle finger all the way from Cupertino. Analyzing the artists in your iTunes library, Apple Music will offer some playlists that serve as introductions to a certain artist, while others collect the deep cuts. But they also get more specific than that. As if Apple Music knew I was a music journalist, Apple Music recommended its “Songs Containing Music Criticism” playlist to me.

“Whether it’s Pavement ragging on Stone Temple Pilots, Scritti Politti shouting out to Run-DMC, or Belle & Sebastian extending an olive branch to The Beach Boys’ much maligned Mike Love, musicians have a long history of using their songs to comment on the work of their peers,” read the intro blurb. “Enjoy this playlist, which features some of the finest and funniest moments of music criticism.” How this recommendation was ascertained from my music library is unclear; spending too much time trying to figure it out might lead me down dark paths, but it’s right there under the “For You” tab in my menu.

While we’re on the topic of music criticism, the Apple Music-curated playlist by music criticism website Pitchfork seems to almost be a conflict of interest.

On one hand, Pitchfork has an earned reputation as taste-makers amongst hipsters, crate-digging intellectuals and cool, audiophile dads alike. When they compile these “Modern Americana Gold” or “Napcore” playlists, the songs that appear certainly fit the vibe Pitchfork is going for.

But on the other hand, organizing the recommended music as a “Best New Tracks” playlist to appear first on their Apple Music page sets an arguably unethical precedent—it’s a clear incentive for artists longing to be featured so prominently by Apple. Pitchfork should stick to music criticism. The potential for favoritism seems inevitable when the aspects of Apple Music business are commingled with the Pitchfork editorial world.

Organizing the recommended music as a ‘Best New Tracks’ playlist to appear first on their Apple Music page sets an arguably unethical precedent. Pitchfork should stick to music criticism.

Then there’s Apple Connect, originally touted as a sort of miracle for underground, un-established artists to promote themselves globally. Early reports claimed it to be akin to Soundcloud, an online network that allows an artist to directly upload a track or a bit of news and share it. But the catch with Apple Connect is that the artist needs to already be on iTunes and Apple Music—a tedious process in of itself that often involves a content aggregator who will edit your music to Apple’s required specifications.

What Apple Connect looks like now is a smattering of superfluous multimedia easter eggs, presented in a social context designed to create a faux-casual vibe between the artist and their audience. Flea from the Red Hot Chili Peppers poses on a porch with his broken arm, and says recording for the band’s next LP will begin as soon as it heals, while FKA Twigs offers a behind-the-scenes video of some new choreography for one of her songs.

Apple Music really is a mixed bag—some features feel small and personalized, while others remind us just how big Apple’s endgame is. Ultimately, subscribers might be happier to see these now-distinct sections of Apple Music work together a bit more harmoniously. Apple software does have a reputation for getting smoother with subsequent software updates though, so we’ll wait and see. The sheer amount of content and reach that Apple has almost creates enough of a “wow” factor to make you forget that they are the largest company in the world. And after all, your big brother always did have the better record collection. 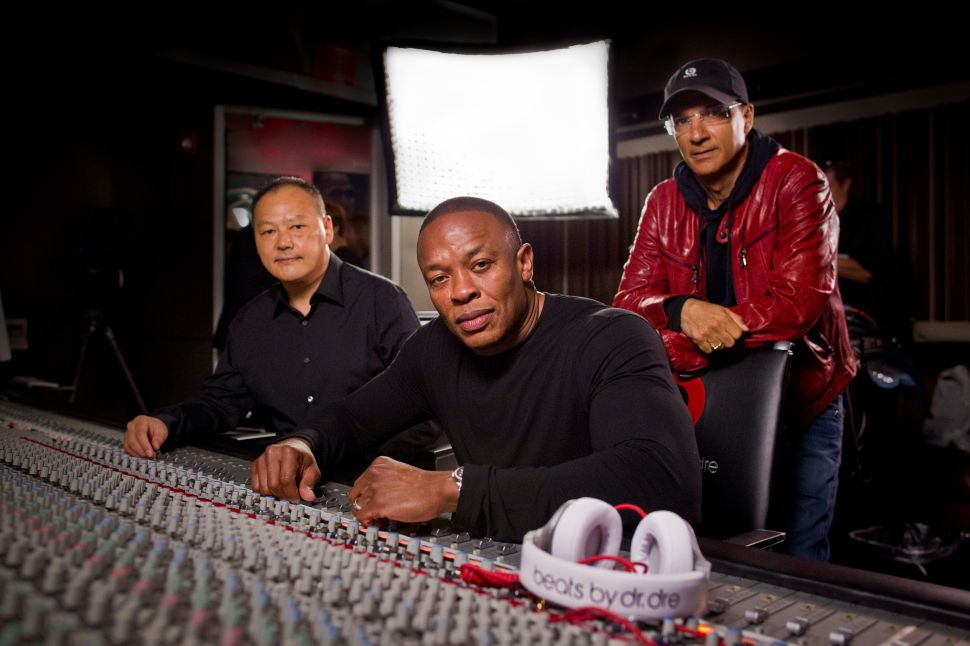