Los Angeles’ forthcoming Broad Museum is an art lover’s dream in many respects: the sprawling institution will be free to the public and showcase Eli and Edythe Broad’s mammoth post-war art collection. The museum, set to open in the fall, will also be endowed to the tune of over $200 million, and so it should be free of the woes that plague its neighbor in Downtown Los Angeles, the MoCA, which has struggled financially for more than five years.

But, as impressive as the museum will surely be when it opens, there is a lot of wrangling, coordinating and choosing which works to display to be done before the galleries are unveiled to the public, the Los Angeles Times reports.

Curators and preparators have not yet decided exactly which works will be on display, and they’ve encountered some logistical hurdles when it comes to finding room for some new acquisitions.

The most difficult task was finding a way to show Takashi Murakami’s In the Land of the Dead, Stepping on the Tail of a Rainbow, a work that is 82 feet long and 10 feet high and didn’t fit on any one wall of the new, $140 million museum.

Fortunately, the artist signed off to have the massive, colorful mural split over a two walls, with the work, which is paneled, spilling over at one corner, chief curator Joanne Heyler told the LA Times.

The Broads bought the work in their flurry of acquisitions earlier this year. They nabbed works by younger artists like Mr. Murakami, Jon Baldessari, Robert Longo and Damien Hirst to add to their impressive selection of Rauschenbergs, Ruschas and Koons.

The curatorial staff of the new museum are still sorting it all out. While the Murakami is up, now, there were travails along the way.

“It’s a brand-new building, and it’s expertly constructed, but the wall, by the tiniest fraction, is not completely flat,” Ms. Heyler told the LA Times.

The elevator in the newly built museum is now called Big John, a reference to a construction worker who spent a lot of time in it. The lift was constructed specifically to accommodate Ellsworth Kelly’s “Green Angle,” which is more than 20 feet long. The elevator is probably larger than your apartment, if you’re a New Yorker.

But it still looks like the museum, which was initially set to open in 2014, will be ready for the public by the September 20 opening date.

“It’s not very stressful for my team,” she told the paper about hanging the remaining pieces, the identities of which have not been disclosed. “I think it was more stressful for Joanne, trying to decide where to put [the Murakami] in the gallery.” 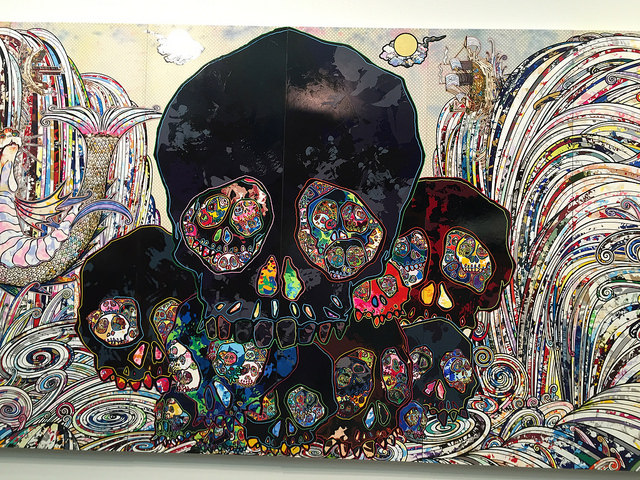