Tomorrow, the United Kingdom—nay, the entire Milky Way galaxy—will celebrate its most important holiday: the second birthday of His Majesty Prince George, adorable progeny of Prince William and the Duchess of Cambridge, Kate Middleton.

While most of us will spend this most holy of days obsessively clicking through one amazing Prince George photo after the next, imagine being tasked with the daunting task of throwing a party for said soon-to-be-two-years-old prince. How might one satisfy the no doubt exacting demands of Prince George, who, despite being cute, is also rumored to be one of the most tyrannical royals in all the land?

For anyone facing this hugely important assignment, we’ve scoured photos of young George to determine what, exactly, will make for the most rollicking good time.

For proof, please observe what happened when Prince George’s nanny was busy attending to Princess Charlotte:

Forget “No Girls Allowed”; Prince George seems to be quite taken with his new baby sister.

It isn’t often that Prince George looks joyful or completely carefree. But he broke his frowny facade in June, when he played with mum Kate Middleton in the grass:

Perhaps even try incorporating a sport. Prince George, it would seem, is a big fan of polo:

Prince George loves animals—as evidenced by that one time he appeared interested in a butterfly resting on dad Prince William’s hand. A petting zoo is probably in order—or at least a visit from the Queen’s army of corgis.

5. Do not make the dress code “pink overalls only.”

6. Consider having him enter via private jet.

Nothing looks cooler than showing up at your own birthday party via private jet. Also, Prince George is totally accustomed to arriving places in style.

7. Do not use this painting as decoration.

Because it is terrifying.

8. And finally, windows. Definitely do something with windows.

This picture says it all: 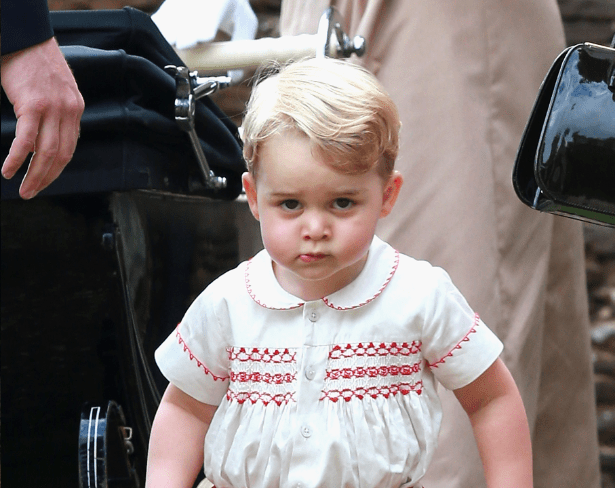