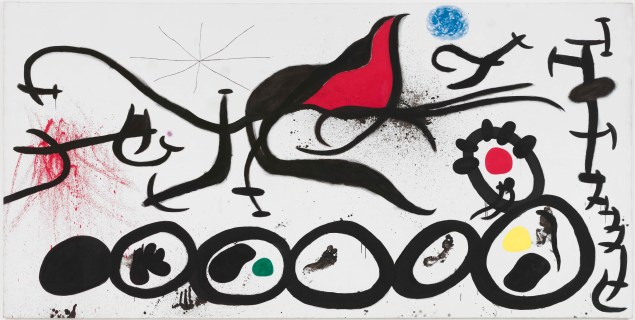 There’s a reason we often hear the phrase “one-hit wonder” in regards to creative types: Reinvention is a lot harder than it sounds. But great artists find ways to revitalize their art. Such artists may seem like sponges: new visual information flows both in and out of them like .

One such artist was Catalan-born Joan Miró (1893-1983); the gifted Spaniard not named Pablo Picasso who came to symbolize the region of his birth even more than his famous fellow countryman. 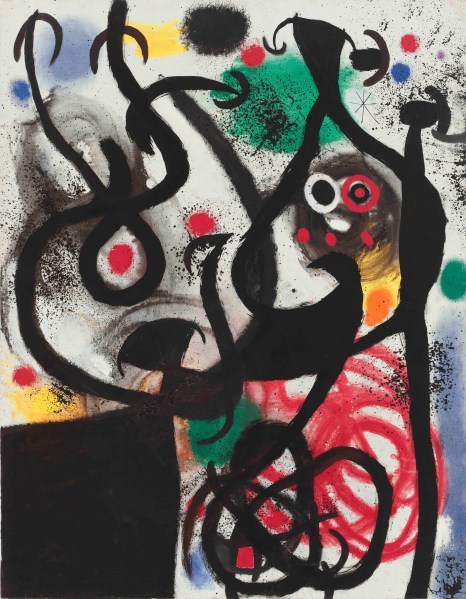 Proof of Miró’s sponge-worthiness can be found in an exciting new show of his late works, up now at Nahmad Contemporary though July 18. What is particularly fascinating about the works on view—most of which were produced when the artist was over 70 years of age—is how they were so clearly influenced by the younger generation of American artists known as the Abstract Expressionists; a group who themselves jumped off from Miró’s own inventive abstractions of an earlier time.

This kind of humility—where an artist who is already considered an icon is eager to admit deference to less-established artists—is a trait that often separates the great from the merely good. It signals an artist who would do most anything in the service of constant reinvention.

The son of a watchmaker and a goldsmith, Miró was born with the blood of a craftsman, but like many young artists of his generation, he adopted an anti-bourgeois stance that quickly began to inform his tastes. The declarative statements of the Fauves, and then the Cubists and Surrealists, were a perfect fit for an artist who once famously announced, “I want to assassinate painting”—a stance that instantly endeared him to avant-gardes around the world.

Miró’s earliest works mix the bold color of Matisse’s Fauvism and the intricate structure of Picasso’s Cubism, showing an undeniable talent for both line and color. From there he moved into what could be termed a “magical realist” style that aligned him with the emerging school of Surrealism.

It was a style that was practiced by popular artists such as Salvador Dalí and René Magritte, painters who worked in a realistic visual style in order to create dream-like scenarios. But as painting began to wander further into abstraction, the Automatist Surrealists were born, and Miró took interest. This group of artists, which included Andre Masson and Jean Arp, used accidental or symbolic marks and shapes to induce a certain psychological mood—one where objects or figures were not clearly recognized. 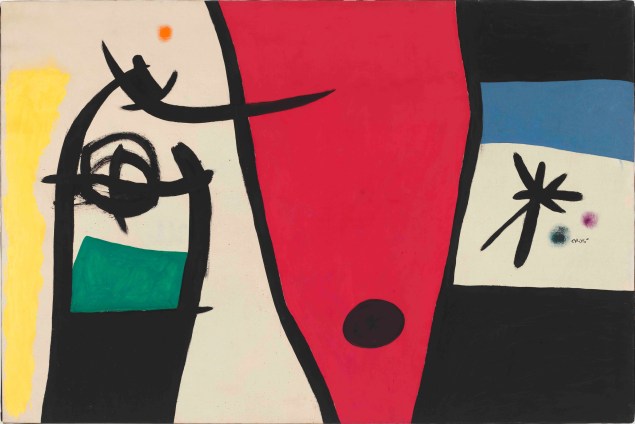 Femme à la voix de rossignol dans la nuit (Woman with the Voice of a Nightingale in the Night) April 18, 1971.

Over the years, Miró created a spectrum of works between these two polarities, starting with a tightly wound representational painting style that slowly mutated into a personal form of abstraction (though it should be noted that Miro never formally joined the Surrealists, as he always wanted to keep his options open).

Late-’20s paintings like Le Cheval de Cirque (Circus Horse), 1927, which is in the current show and the earliest on view by 40 years, are gorgeous examples of Miró’s abstract Surrealism.

Circus Horse’s unhinged group of floating symbols was a noticeably radical composition for the time. At this point in his career, Miró had already established a language of finely rendered characters (from a sperm or arrow-like line to an opposing planet/egg shape) many of which are at play within this smallish work. In the painting, an elegant horse made of dancing curves and wisps floats over a slab of mountain, while colored stars or planets dot its surface. It’s an interesting contrast to the late paintings in this show, which explode in scale and gesture yet employ the shadows of Miró’s symbolic shapes; cyphers that he had relentlessly pared down all his life.

Miró enjoyed a fertile period of innovation between the ’20s and ’50s. These explosions of brilliance were not lost on later generations. After Miró’s Museum of Modern Art retrospective in 1941, many Abstract Expressionists from Jackson Pollock to Robert Motherwell became enraptured by his work. Meanwhile, other Ab Ex painters such as Barnett Newman and William Baziotes adopted Miró’s mystical symbolism in their work. Not long after, the New York School of Abstract Expressionism—and their signature wall-sized compositions—took the world by storm. 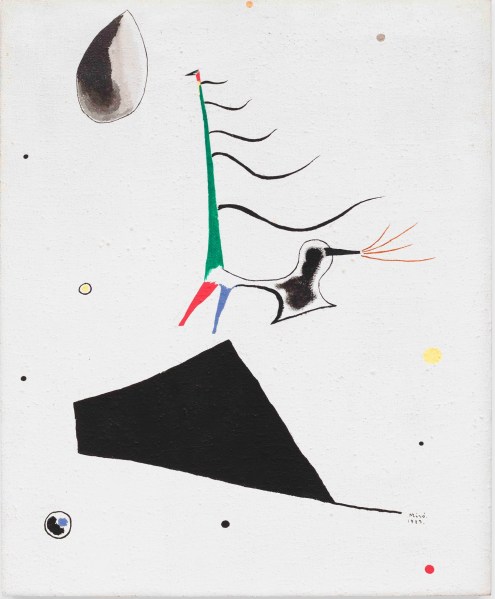 The sheer magnitude of these mature Ab Ex canvases, which found their way to Miró via the “New American Painting” exhibition that toured Europe in 1959, let the Spaniard come full circle; he was moved to reinterpret a new set of pioneers just as he had originally been moved by the Fauves or the Cubists.

“It showed me the liberties we can take, and how far we could go, beyond the limits. In a sense, it freed me,” said Miró of the new American art, and there’s no doubt that he “got” what they were doing. This is evident in the remarkable La Marche pénible guidée par l’oiseau flamboyant du désert (The Sorrowful March Guided by the Flamboyant Bird of the desert) from 1968, a canvas on view here that is over six feet high and stretches to nearly 13 feet long. That’s quite a scale shift from 1927’s Circus Horse, which is the epitome of a Parisian easel painting at 24 by 20 inches.

Like many Mirós, La Marche employs a reductive color scheme: Primarily black, highlighted by areas of simple red, yellow, green and blue. Interestingly, this work shares the same palette (and unmoored composition) as Miró’s Circus Horse painted over 40 years earlier. The piece is practically an inventory of Miró’s experimental paint applications, from Miró’s signature hand-painted curved “arrow” lines, to a rake of dry, Twombly-esque slashes. The artist even coyly implements his own footprints within the painting, nodding to the Pollock-like dance around the canvas that he’d embraced for these large-scale works.

Femme à la voix de rossignol dans la nuit (Woman with the Voice of a Nightingale in the Night), 1971, has a similar sensibility, but with an architectonic structure that reimagines Mondrian as free jazz. Thick black lines separate the canvas into a dynamic triad, with swooping arrowed gestures occupying the left section, a red color field with a gauzy black spot lighting up the middle section, and a wavy flag-like sequence of bands that even contains a primitive star shape snugly tucked into the right-hand section. Despite Miró’s eclectic variance, Femme a la voix ends up as a masterful balance of shape, line and color; one that few artists could emulate.

Joan Miró died in 1983, but (as one would expect) his later work has gone on to inspire generations of young artists from Chris Martin to Josh Smith. The continuation of this feedback loop would likely have pleased him to no end. 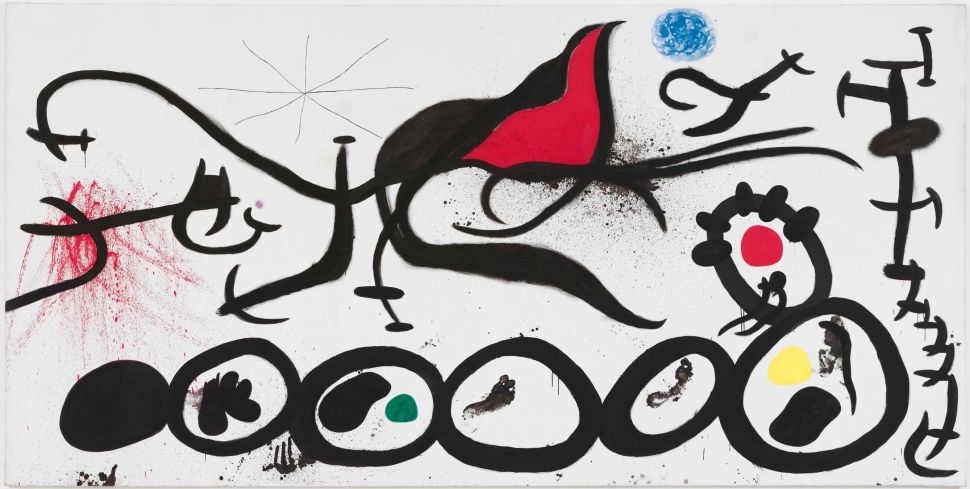