Family Ties is a surgical cross section of a nation at once at war with itself and yet forced to live in close quarters, sopping with ideological kerosene, and with it’s many players holding matches. It raises to us the questions that haunt our American society like so much spilled blood. What are we fighting for? Do we owe atonement for the mistakes of our dead fathers? Where was Reagan taking us? What kind of name is Meredith Baxter Birney? How do they get the child actors to deliver these zingers? Do they use peanut butter like Mr. Ed? To delve into these mysterious canyons is to watch all seven seasons of Family Ties. This show lasted seven seasons. This show lasted as long as the Shield. Here we go.

The program begins with a washed out montage of our leading couple, Steven and Elyse Keaton, culturally appropriating the attire of proud Native Americans at some sort of hoe down Nascar event. The newlyweds are seen indoctrinating their children with bullhorns and arts and crafts projects, no doubt bent on perpetuating some backwoods evangelical perverted mythos akin to the likes of David Koresh or Timothy McVeih. I imagine the cutting room floor during this scene, leafed like a Manhattan autumn with clips of the two, drunk on jug liquor, riding “four wheeler” motor vehicles, tap dancing on driftwood, and smoking lucky strike cigarettes. We are immediately horrified and mystified that these sorts of yahoos hold custody of children. It reminds us of how fragile and precariously built a society can be. A society held together by ties. Family Ties.

But then the show zigs when we think it will zag. It reveals to us something altogether typical of the western nuclear family. The children are in defiance of the fascistic Manson-esque parents. The elder son, Alex, is a young intellectual. He reads, attends talks at colleges, dresses sharply in sweater vests like he’s in The Decembrists or something. Alex is being Ironic, I’m assuming, in that he constantly lauds Reaganomics and effectively appears to hold the political stance of a racist white supremacist. If he were being serious, this show would be really messed up. Some family sitcom starring a young Donald Trump or Ted Cruz, sauntering around the house in sensible dockers and boat shoes, throwing racial slurs around, yelling about welfare and accidentally shooting himself while cleaning his own gun. Don’t get me wrong, that would be hilarious, but it would never make it onto television. Why would anyone watch a show about young republicans when you could just watch all the good King Joffrey episodes of Game of Thrones? Thank god this character is kidding.

The daughter, Mallory, is an empowered third wave feminist. She owns her own physical image with cosmetics and the spirit of the punk rock movement of the 1980s. She’s so fucking punk rock. She likes spending money at the mall and trying to get people to like her. Nothing is more punk than spending 200 dollars on a bunch of shoes from Khol’s or something. Jennifer, the youngest, appears caught in the political crossfire, and at times seems to buy into her parents white trash American dream. The Keaton house is a microcosm of American society. Their story is set in the 80s, but like a Bill Hicks album or the first three Harry Potter books, can be read as if it is almost happening all over again today. I like to imagine the household in modern times, alive with the fire of the Black Lives Matter protests, arguing with one another about issues of 2015, like drone warfare, and whether a photo looks like a pair of women’s legs or a pair of hot dogs. I imagine the Keaton family bonding over arguments of whether Mexican people should be deported, or cops should be allowed to murder teenagers for fun, or who can get the highest candy crush score.

The stories played out in Family Ties are those of class warfare, of an economic recession, of the Iran-Contra affair, of high school students trying to have sex with college students. Seriously, the third episode of this show is about Alex getting a job as a grocery delivery man, and then visiting a blonde college student that looks exactly like his mom. I honestly wasn’t paying attention and I thought he was talking to his mom for most of this scene, which got really weird because it basically played out like a 1980s porno. The couple end up banging and then when Alex’s beatnik Phish fan parents find out about it, they just sort of go “Whoooooa” before going outside to huff air duster or whatever they get into on weekends.

Another episode of this show involves Mallory, who is sixteen years old, staying out all night with a man who is clearly a child predator. He’s like seven feet tall and he comes to a party in her weird 80s suburban living room and then tries to get her to have super illegal sex with him in his Dodge Dart while he does laps around the neighborhood. I’ve been to some weird parties but never one involving Tea Party propaganda and a 10-year-old that keeps spitting Rodney Dangerfield level one liners. In fact the only party I’ve ever been to that’s anywhere near that level is probably the time I went to a rager in Varg Vikernes’ barn and a guy got stabbed in the eye.

Anyways Mallory doesn’t end up sleeping with the guy but yeesh. You know what? I don’t like this show anymore because something bad happened to one of the characters on it. I’m so upset by this I think we should try to get everyone involved with this show fired, you know, like when a comedian says a word we don’t like. Does anyone know what this Michael J. Fox is up to these days? Let’s take this fool down. #DownWithMJF 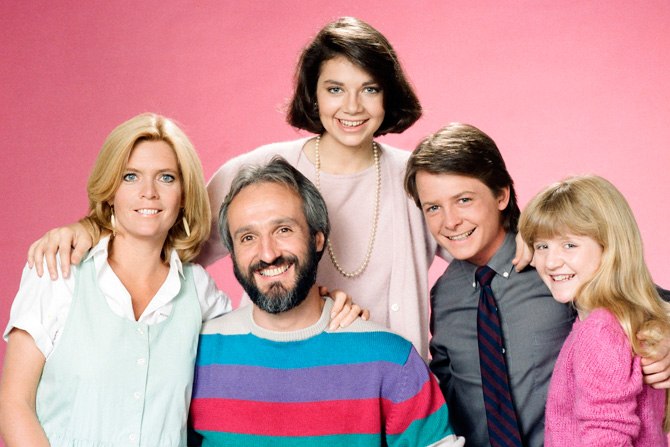