We’ve all heard the stories—maybe we’ve lived the stories—of making plans to meet up with someone on a dating site or app. Users of OKCupid, Tinder, Hinge and their colleagues often look forward to meet up with an online strange enough only to find the reality of the meeting much worse than the most realistic of expectations. One party is completely not into it, but there’s no way to just say that, so he or she sits through maybe 45 or so painful—or at least unrewarding—minutes, a little distracted the whole time about how, when the server comes to ask about another round, to say some version of “you know, I’ve got this thing…”

So how about a proposal for online daters that holds everyone harmless here, ups the efficiency for both and gets to the denouement more quickly: ask your dates to meet at the bar of a convenient purveyor of beverages for just one shot (with an implied option to extend).

Here’s how it would work:

First, be up front about joining Team One-Shot-Date. Put it in your profile’s bio. Write something at the end like, “I’m down with One Shot Dates,” or “One Shot Date proponent.” Whatever. Use the words, though, so your match isn’t blindsided.

The whole notion of a the One Shot Date might be a conversation starter, anyway, even if that’s not the path the two of you end up going down.

Second, get a conversation going on the site or app. When it feels like it’s time to suggest meeting face-to-face, say something along these lines: “Hey, it would be great to meet you. Any chance you’re down with meeting up for a shot?” Anticipate that you might have to explain the concept, especially as this movement catches on. If they agree, name a spot and make a plan for a time.

Also, make a plan for the shots themselves. This is key.

50,000 first dates, how online dating makes finding a partner harder than ever.

Third, if you both agree on the shot order ahead of time, then whichever one of you arrives first should order both shots (they don’t have to be the same), so they are ready and waiting. This is important, because it prevents one of you from feeling weird about it or pulling a switch and saying, “You know, what if I just get a vodka-tonic?”

This part is also a chance to show some personality and maybe add something to the pre-conversation. Maybe you’ll both have something simple, like a shot of Knob Hill (since everyone on Tinder has apparently become a whiskey afficionado). Or perhaps you’ll want to go high class and suggest shots of Grey Goose? Or show some variety by suggesting a cocktail shot (I love Irish Car Bombs—anyone want to meet for car bombs?).

Non-drinkers? Have a shot of wheat grass at a juice bar, an iced espresso shot or meet at a park bench with two bottles of those little ginseng shots. Not all shots are booze, but they all drink quickly.

Fourth, both parties need to have a second location nearby in mind, ahead of time. Do not discuss this. It should be assumed. Just have an idea. It is incumbent on both parties to be ready for a vulnerable moment  here and suggest extending the date. Having an idea ready to go is critical.

Fifth, meet up, do that weird online date hug at the bar, do not sit, lift the shot that the first arrival already ordered and paid for (drop gender roles for this one drink, folks), toast to life while looking each other in the eyes, knock it back and slam it down. Salut!

Sixth, this is the critical moment. If it feels good for either one of you, this is the moment at which you say: “Hey, you know, I’ve got time. There’s this wine bar down the street I always like. Want to check it out?” At that moment, your interlocutor can either say, “Sure, that’s great,” or “You know, I’d love to but I’ve got this thing at this place.”

If it sounds cold, look: it’s what people already do as is. Having a full cocktail together, sitting down, it just extends the pain when one party instantly realizes they just aren’t into the other. So let’s agree to make it short and sweet. The Internet has not yet learned how to properly show us how we’ll feel when we meet, but our minds and bodies know fast. So let’s cut to the chase. No one is here to make friends.

Let’s agree not to take it personally when someone proposes a One Shot Date, because, after all, you knew they might: they put it right their on their profile, after all.

Let’s agree we’ll order the drinks, remain standing and keep an eye on efficiency, to move this night along.

Let’s agree to save each other some time, because, before you know it, summer reruns will be over and, if we keep it short, there could still be time to get home and let Scandal rescue your evening. 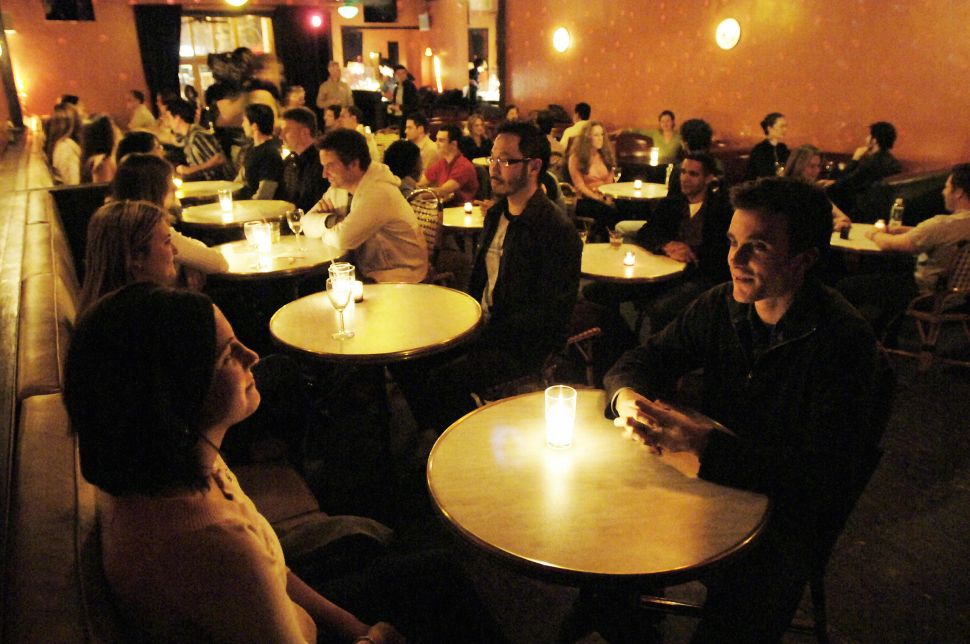