Here’s the old artist model: Sit in your studio and make paintings or sculptures and wait to be discovered.

Coming to New York City with her family from South Korea at age 4, Ms. Lee eventually studied painting, printmaking and ceramics at the School at Museum of Fine Arts in Boston. After school, she continued to work at these mediums while keeping day jobs in the fashion industry. But unlike many artists, Ms. Lee paid as close attention to her day jobs as she did to her art practice. Now her brand is taking off.

Aside from the current group show she’s in at Galerie Lefebvre in Paris, she is also set to appear in group shows this summer in London, Mexico City, and Los Angeles. We asked her a few questions about her different markets, her entrepreneurial spirit, and the meaning behind her signature ceramic masks.

You worked in the fashion industry right after art school. Did that help to mold you as an artist?

After art school, I needed work badly, so my friend Cindy Greene–who was the co-founder and co-designer of the fashion line Libertine–offered me a job assisting her. A huge part of what I currently do for my business was acquired there, as well as at Establishment Casting and the vintage clothing store and rental archive Resurrection Vintage. I would not be as organized, consistent, or aware of the importance of client relationships if it weren’t for working at those three companies.

When did you first realize that you could make and sell applied art as well as your fine art? In the old days, it used to be considered a sin when artists did both publicly.

When I returned to working in ceramics a few years back, I obsessively made masks, sculptures, bowls, plates, cups, boxes, mini chairs, everything. We had a show in the space I was working in called Clayspace 1205 and people bought the art as well as the functional pieces. So I just continued to make everything.

Glazemoods is what I call my “diffusion” line, which I occasionally do on the side for stores I love or people I know. It consists of tableware pieces sold in a few stores in limited editions. With Glazemoods, safety is a big concern, and I have to worry about where food gets stuck, bacteria, and food safe glazes, so I am more limited.  The masks and sculptures are where I execute much of what is inside my head, and where I’m able to fully experiment. That being said, both worlds have an inherent dialogue with each other.

The face theme in your wall works has its roots in the agoraphobia (fear of crowds) you suffered when you were younger. Do you see these pieces–sometimes hung salon style–as a way to find humor in this disorder? Is making them a form of therapy?

Definitely. They mature with each show and prefer to be more to be on their own now, instead of in groups… Maybe that is still agoraphobic? (laughs) Making these slabs does feel like the ultimate therapy session though. When I am not in the studio making them, I start to feel restless and mentally ill.

It looks like you’ve circled back to fashion, creating dresses and bags for the designer Rachel Comey. How did that come about?

My friend Lina Hellden who works for Rachel presented the idea to her, and she was into it. They brought several ceramic pieces to their studio to be photographed and in turn, created approximately 8 pieces for the current Pre-Fall collection with the images. They also translated the ceramic glaze into shearling for accessories.

On the business side, it’s often tricky navigating where and how to sell your work, especially with multiple interests. Do you prefer making objects for the craft market or the contemporary art market?

I prefer making my art pieces by all accounts, but I realize that not everyone can afford [fine art] and that is partly why I created Glazemoods. But I do have people that buy both. As far as what world I prefer to work in, I just find it best to work with people who are genuinely excited about what I make and are eager to show it to their clients. That inspires me to continue working with them, whether it’s a gallery or a showroom. 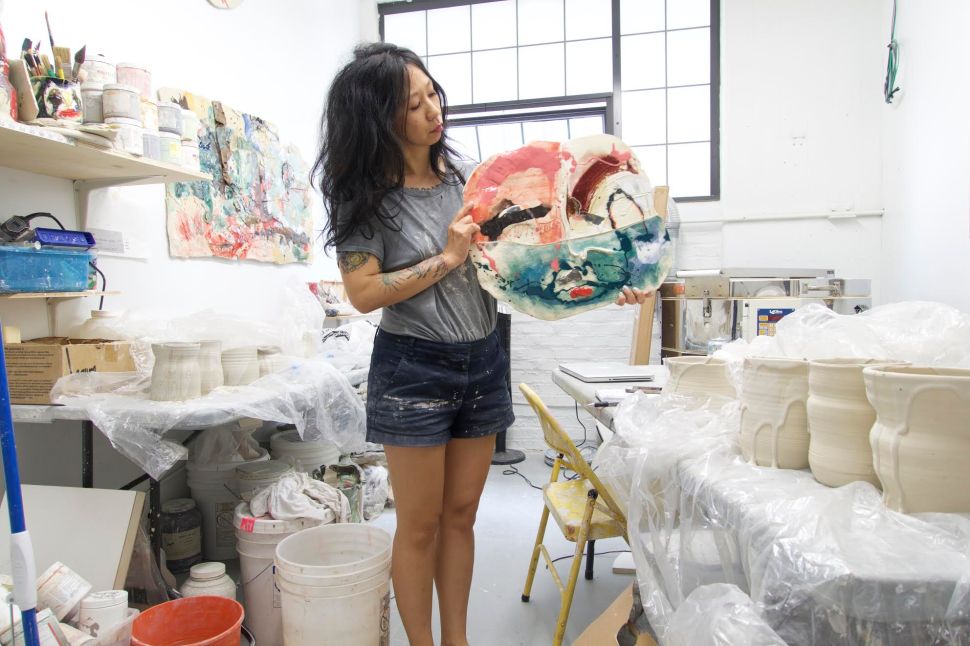