Having just read John H. Richardson’s portrait of climate scientists in August’s Esquire (Cliff’s Notes: Note cliff over which humanity will soon plummet) and Kathryn Schulz’s “The Really Big One” in The New Yorker (“An earthquake will destroy a sizable portion of the coastal Northwest. The question is when.”), the gently unfolding scene in Tompkins Square Park on a recent summer evening seems pointless, a tender tragedy. Only human weakness, our need for hope, penchant for ignorance, allows us to laugh, freestyle rap, play badminton as ocean levels rise and we consign our children to an increasingly certain future of rapine. But before I walk into the East River, stones in pocket, I look down to the small package, swathed in tin foil, that has brought me to the East Village in the first place: Brooks Headley’s Superiority Burger. Before I die, I thought, I’d better try it.

This is a tale of two sandwiches and two responses to the existential despair we should all feel but only few acknowledge. Mr. Headley, the longtime pastry chef at Mario Batali’s Del Posto, recently opened Superiority Burger, the tightly focused vegetarian to-go shop on East 9th Street. A few blocks northwest, David Chang unveiled Fuku, a single-topic restaurant serving fried chicken sandwiches in the space that was once Ko, the most blue chip restaurant in his portfolio, and before that Noodle Bar, his first. Each man, in his own way, is a punk. Mr. Headley, a hardcore drummer steeped in the Baltimore music scene, literally; Mr. Chang, in his burn-it-all-to-the-ground, balls-to-wallness, spiritually.

But that’s about the extent of their similarity. Whatever indie insurgent spirit once animated Mr. Chang has by now been institutionalized. The cycle of upstart to overlord is natural and inevitable, and a fried chicken shack makes good business sense for Mr. Chang: it’s a crowd-pleasing, easily graspable venture with relatively low costs that doesn’t eat away at his other core businesses.

What Mr. Headley is doing, on the other hand, is more ambitious, stranger and much riskier. Superiority Burger, for which he left his post at Del Posto, represents an all-in gamble that a small patty of quinoa and other grains bound by egg, topped with a slice of muenster and served on a White Castle-sized roll, could a business sustain. Those are long odds. On the trend spectrum—from hot dogs to burgers to fried chicken—veggie burgers are a hazy dot on the horizon.

But when Bangladesh is gone and everything west of I-5 has crumbled into the ocean, we’ll probably look back and wish there were more people like Mr. Headley and fewer like Mr. Chang. The two restaurants represent different points in how seriously we’ll change our habits in the face of almost certain environmental doom. Mr. Chang stands for “kinda.” True, chicken is vastly better for the world than beef. According to the Environmental Working Group’s “Meat Eater’s Guide to Climate Change and Health,” a kilogram of chicken consumed produces four times fewer kilograms of carbon dioxide than beef. So that the fried chicken sandwich is overtaking the burger is good news overall. But it’s rearranging deck chairs.

Mr. Headley is more revolutionary. Superiority isn’t veggie-forward like Semilla, but vegetarian. Mr. Headley’s reasons for this have more to do with the longstanding amity between punk music and vegetarianism (i.e. Fugazi) than concern for the planet, but the outcome is the same: If everyone in the United States went without meat and cheese for one day a week, it would be like taking 7.6 million cars off the road. That’s real change.

Technically, Mr. Chang’s spicy chicken sandwich tastes better. Anyone who’s had the fried chicken dinner at Ssäm Bar knows Mr. Chang long ago unlocked the secret to crispy-cased, succulent, gently spicy poultry. At Fuku, the fried chicken sandwich ($8) is a tectonic plate of thigh meat, marinated in habanero purée, dredged in spices and fried to a near schnitzel-brown. Evaluated in terms of standard sandwich UX, it is a strange bird indeed. It had previously been my understanding that sandwich eating is a static experience: The composition of the first bite mirrors the last and each in between. But because the size of the chicken outstrips the size of the bun, a good 50 percent of the experience is eating chicken straight up. The bun—a Martin’s potato roll gently steamed—is more a handle than a true partner to the chicken between it.

So Fuku makes it onto the chicken sandwich bandwagon on a technicality. And what, if any, innovation is well shrouded. The Velveteen bun, the crispy exterior of the chicken and its chewy insides—these are not new forms discovered but classic ones well done. At Superiority Burger, the space is smaller and the soundtrack more obscure, though the anticipation has been equally high-pitched. Many in the food world had eaten Mr. Headley’s sandwiches at various benefits and special events over the years (he has been obsessed with veggie burgers since 1999), and the steady drum for its creation has only loudened through the years. The weeks before it opened, in the former Dirt Candy space in the East Village, Mr. Headley displayed a dummy menu for a restaurant called “Chickens.” Among the entries was a triple-fried chicken (with cracklings) and an “Eggy Negroni.” But what actually hatched is much more surprising. Though the menu is slight, the ambitions are large.

Still digesting Mr. Chang’s spicy chicken sandwich on a recent Friday evening, I joined a line that spilled out onto East 9th Street. Most of the space is kitchen, and from it comes the burger ($6), a wrap ($9) and a Sloppy Dave ($7). The burger is tasty and the substitution of veggie patty for beef so deft it’s like an edible tablecloth trick. The Superiority Burger is supported by a Martin’s potato bun (this time in perfect harmony with its cargo) as well as a lone sheet of iceberg lettuce, a few slices of dill pickle and mustard. The only switcheroo is that the cow has been put to pasture, replaced by a combination of grains and beans it might have eaten.

The burger—moist, cohesive, with a pleasing char and a pleasant crunch—deserves all the praise that has been and will be bestowed upon it. But the real thing to get is the wrap ($9), subtly flavored and succulent. Mr. Headley compares it to a Mission burrito, and in its heft and fillingness, he’s right. It’s sweet and earthy, crunchy and a little acidic. This is, in part, thanks to the Koda Farms brown rice Mr. Headley uses, which makes another star cameo in an off-the-menu cucumber salad special. In the wrap, squares of tofu, strings of carrots and black beans marshal themselves into flavorful formation. Wraps in general are a maligned category, and for good reason. But this one deserves respect.

Of course, a tiny restaurant in the East Village isn’t going to make a difference either way in terms of affecting world change. Temperatures are still going to rise a devastating 4 degrees in the next 30 or 40 years, and that giant earthquake is likely to annihilate the Pacific Northwest in the not-far-off future. Some would argue, “Fuck it, let’s eat fried chicken ’til we die.” And for them, there’s Fuku, whose name itself is almost an obscenity and whose offerings are obscenely tasty. But for me, aware that there can be no survival, no future to speak of, nothing really I can do to protect my sons or their children from disaster—each bite in the right direction is a small victory. It’s futile, I know, but at least at Superiority, it’s delicious. 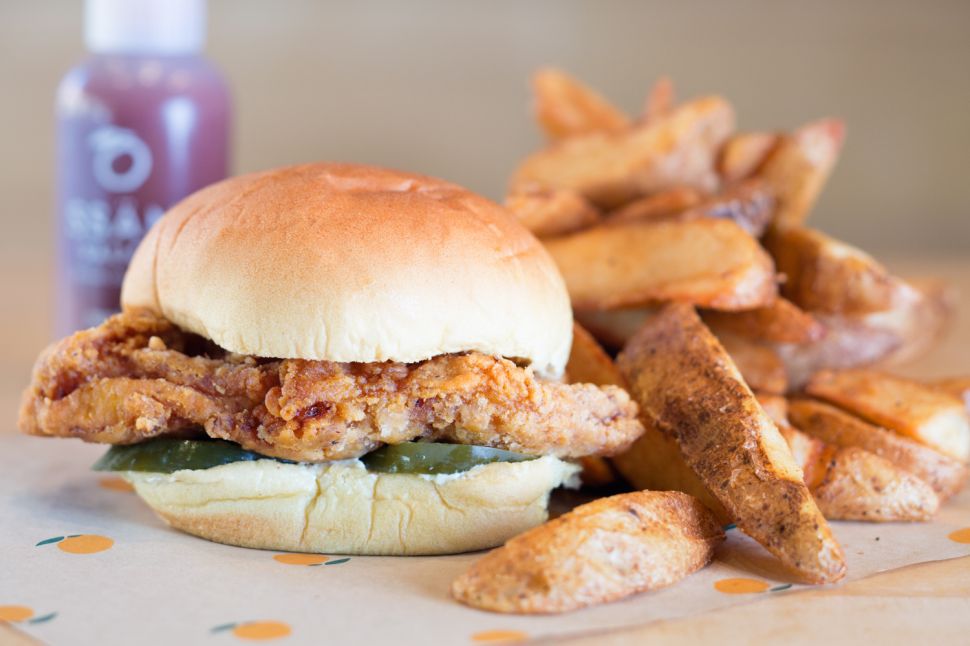