President Obama just shattered another long-standing tradition: he didn’t stay at the Waldorf-Astoria during his visit to New York City this past weekend, and is apparently not planning to use the venerable Park Avenue tower during September’s meeting of the United Nations General Assembly. Every president since Herbert Hoover has either lived or stayed at the Waldorf—though Jimmy Carter says he never actually spent the night—and it was for many years the official residence of the United States’ Permanent Representative to the U.N. The list of overnight guests includes Mr. Obama who stayed at the hotel during previous General Assembly sessions.

But no more. The State Department announced that it was moving its headquarters during the UN session. Apparently, the sale of the Waldorf to China’s Anbang Insurance Group triggered either pique over the recent hacking of 4.2 million U.S. government personnel records—where China is the main suspect—or real fears about security. As part of the $1.95 billion sale, there will be a major renovation of the hotel, and some are concerned that the new owners will implant new bugging equipment.

So the State Department has decamped to the New York Palace Hotel, which was recently purchased by South Korea’s Lotte Group. According to documents leaked by Edward Snowden, South Korea regularly spies on the United States, but we don’t much care.

With all of this Spy vs. Spy activity, finding a decent hotel room is apparently getting tougher and tougher. Alas, payback is a bitch.

Mr. Obama came to the City this past weekend for a million-dollar fundraiser benefitting the Democratic National Committee, and to attend a performance of Hamilton with his daughters. (Perhaps it will inspire the President to leave our first Treasury Secretary on the ten-dollar bill and find another denomination for a well-deserved woman’s portrait.) But back to the first-family’s trip.

Now, we’re as star-struck as the next fellow, and there are few things as dramatic as a presidential visit. But did Mr. Obama’s security needs really demand the shutting down of the FDR Drive and a caravan that included, according to one Observer reader, “31 motor bike police two stretch limos and 31 other various vehicles including one Swat Team vehicle, numerous SUV’s and larger type passenger vans and about 7 police cars.” (We didn’t notice Mayor de Blasio proposing a study of the very substantial congestion created by presidential visits.)

The next day, when Mr. Obama and his daughters took a not-so-impromptu walk through Central Park, a caravan of 31 vehicles delivered them, at least 10 secret service agents, almost all wearing not-quite-matching blue and gray short-sleeve shirts, surrounded them, and a giant Cadillac Escalade followed closely behind—on the sidewalk.

We are not suggesting that Mr. Obama and his family don’t need an appropriate security detail or that an outing with his daughters is not well-deserved. But enough already. This casual-in-force display is eerily reminiscent of when Richard Nixon dressed up the White House guards in praetorian uniforms. Perhaps it is time for Mr. Obama to break with tradition once more, and treat private travel as—well, private.

He might do well to take a page from the British. Both Prime Minister David Cameron and the heir to the British thrown, Prince William, were recently photographed traveling (heaven forbid) economy class. Mr. Cameron flew off on holiday to Portugal with his family aboard EasyJet—a discount airline. (Not to be outdone, opposition leader Nick Clegg took his family to Spain, also on Easyjet.) Similarly, Prince William and his wife Kate Middleton managed to stay chic flying to the French Alps for a ski vacation also on Easyjet. And when traveling through America, Prince William was photographed in the economy cabin of an American Airlines plane.

Security is one thing; a sense of moderation is another. They are not incompatible values. 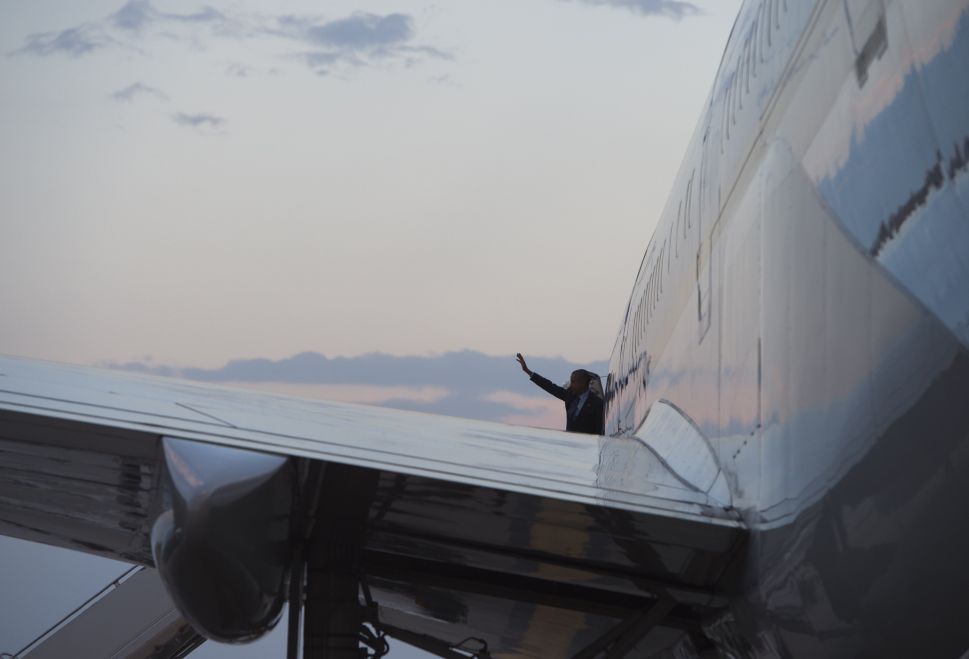