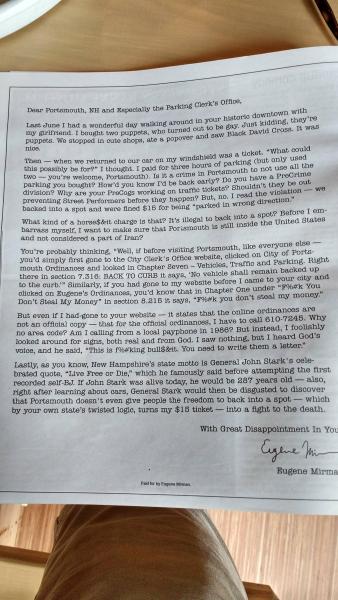 The comedian Eugene Mirman—who is as known for his humorous takedowns of companies (most notably, Time Warner) as he is for his standup and lead voice role on Bob’s Burgers—is in the letter writing, ad posting business again.

In a recent letter from Mr. Mirman posted as a full-page newspaper ad, he humorously gives the City of Portsmouth, New Hampshire a piece of his mind in response to a $15 fine he received from the city for backing his car into a parking space. A photo of the ad became popular on Imgur and Reddit overnight on Sunday, seeing several millions of views and spurring laughs and support from fans.

In the letter, Mr. Mirman begins by comically narrating his visit to the city in June, where after two hours of walking and buying puppets, he arrived back at his car only to discover he was fined for being “parked in the wrong direction.” He calls out the ridiculousness of the parking ordinance in question and directs the city to his own ordinances in a humorous fashion, eventually questioning how the state lives up to its General John Stark-inspired motto, “Live Free or Die.” Here’s the full letter:

Last June I had a wonderful day walking around your historic downtown with my girlfriend. I bought two puppets, who turned out to be gay. Just kidding, they’re puppets. We stopped in cute shops, ate a popover and saw Black David Cross. It was nice.

Then—when we returned to our car, on the windshield was a ticket. “What could this possibly be for,” I thought. I paid for three hours of parking (but only used two—you’re welcome, Portsmouth.) Is it a crime in Portsmouth to not use all of the parking you bought? How’d you know I’d be back early? Do you have a PreCrime division? Why are your PreCogs working on traffic tickets? Shouldn’t they be out preventing Street Performers before they happen? But no, I read the violation—we backed into a spot and were being fined $15 for being “parked in the wrong direction.”

What kind of horse$&it charge is that? It’s illegal to back into a spot? Before I embarrass myself, I want to make sure that Portsmouth is still in a the United States and not considered a part of Iran?

You’re probably thinking, “Well, if before visiting Portsmouth, like everyone else — you’d simply gone to the City Clerk’s Office website, clicked on City of Portsmouth ordinances and looked in chapter seven—Vehicles, Traffic and Parking. Right there in section 7.316: BACK TO CURB, it says, “No vehicle shall remain backed up to the curb.” Similarly, if you had gone to my website before I came to your city and clicked on Eugene’s ordinances, you’d know that in Chapter One under “F%#K You Don’t Steal My Money,” in section 8.215 is says, “F%#K You Don’t Steal My Money.”

But even if I had gone to your website—is states that the online ordinances are not an official copy—that for the official ordinances, I have to call 610-7245. Why no area code? Am I calling from a local payphone in 1986? But instead, I foolishly looked around for signs, both real and from God. I saw nothing, but I heard God’s voice, and he said, “This is f%#cking bull$&it. You need to write them a letter.”

Lastly, as you know, New Hampshire‘s state motto is General John Stark’s celebrated quote, “Live Free or Die,” which he famously said before attempting the first recorded self-BJ. If John Stark was alive today, he would be 287 years old—also, right after learning about cars, General Stark would then be disgusted ti discover that Portsmouth doesn’t even give peopple the freedom to back into a spot—which by your own state’s twisted logic, turns my $15 ticket—into a fight to the death.

With Great Disappointment In You,

Besides applauding Mr. Mirman on another hilarious takedown letter well done, the overwhelming response involved thousands of Internet users freaking out over this weird ban on backing into parking spaces. It turns out that this odd ordinance exists in not only Portsmouth, but other places in the U.S. as well. Sarasota, Florida and Madison, Wisconsin have a similar ordinance, and a fine for the parking method was even recently proposed for a specific parking lot in New Jersey.

Why exactly this ordinance exists remains a mystery. The representative at Portsmouth’s City Clerk’s Office was unable to explain to the Observer why a car cannot remained backed up to a curb, but she laughed a little as we asked her about it. The man in charge of transportation and parking who may have been able to answer the question was unreachable.

The letter rings a bell with Mr. Mirman’s fans and general internet users everywhere. In 2011, he wrote a letter letter similar to the one above to Time Warner and posted it as a full-page ad in a few newspapers. His ad letter made headline news everywhere, and he even did dramatic readings at shows.

UPDATE: This article has been updated to reflect the fact that Mr. Mirman confirms he wrote the letter.