Running to succeed Republican Gov. Chris Christie, Sweeney of Gloucester is laboring hard up here to beat a two-fold perception: one that he’s spent too many years in close proximity to the governor and two, that the city of his home region, South Jersey’s Camden, has supposedly flourished as the great urban incubator of the Christie era while Newark, conversely from an establishment standpoint, gave birth to Baraka, who came to the political party trailing longtime anti-establishment origins. 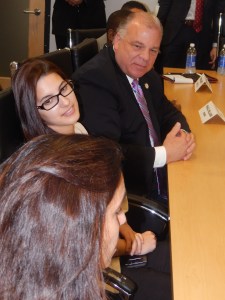 In recent weeks, both President Barack Obama and Christie have used Camden as that set-piece 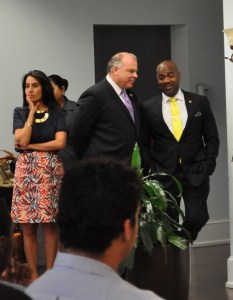 for national and statewide storylines, leaving Newark to gradually grind through the growing pains of local politics, which it’s clearly doing with Baraka at the helm. It’s somewhat complicated. Backed by Jersey City Mayor Steven Fulop in last year’s mayor’s race while much of the rest of the state supported his opponent, the Newark mayor has gradually vibed with those who originally bucked him, Essex County Executive Joe DiVincenzo and now Sweeney among them.

The maintenance of the city requires governmental connectivity, yet for all of this morning’s round table friendliness, Baraka  remains politically closest to Fulop, who, like Sweeney, is also in the 2017 hunt. But Sweeney – who helped restore and augment Rutgers Newark’s Educational Opportunity Fund (EOF) by $2.5 million in this year’s budget (to a total $42 million program benefiting 17,000 students) – is working hard from the bully pulpit of the Senate rostrum to at least make a case for good government relations. The mayor happily received him. “I know students who have benefited from this program,” said Baraka, a former school principal.

According to the state Office of Secretary of Higher Education, the New Jersey Educational Opportunity Fund (EOF) “provides financial assistance and support services (e.g. counseling, tutoring, and developmental course work) to students from educationally and economically disadvantaged backgrounds who attend institutions of higher education in the State of New Jersey. Undergraduate grants range from $200 annually to $2,500 annually depending on the type of institution and financial need. These grants are renewable based upon continued eligibility.

“Forty-one of New Jersey’s community colleges and public and private four-year colleges and universities participate in the EOF program. However, the actual number of available spaces at each college or university is limited. Because EOF is a campus-based program, each campus is responsible for student recruitment, selection, program services, and its own specific criteria for EOF admission and program participation.”

A key ally for Sweeney up north has been state Senator Sandra Cunningham (D-31), who was also present at this morning’s round table. “I’m very happy and we love you,” Cunningham told the group of Rutgers students gathered around the table on the Rutgers Newark campus. 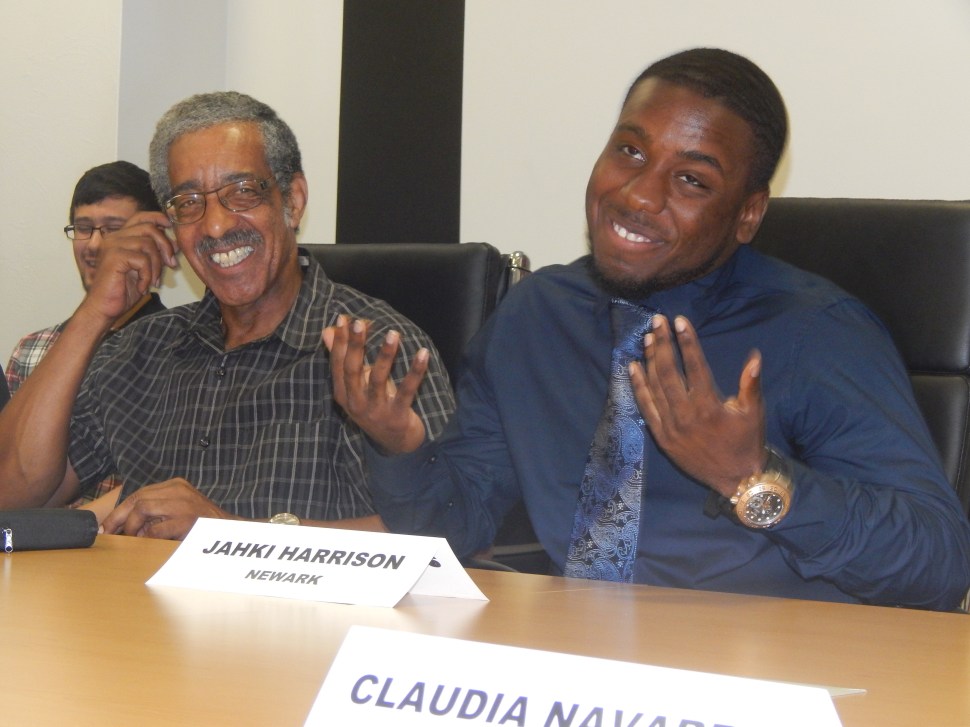 Rutgers alumnus Rice had banged heads with Sweeney hard during the budget process, but the two men evidently weathered those bruises as the veteran senator and Vietnam vet acknowledged what ultimately were EOF gains in the budget. The budget originally showed a $1.5 million EOF decrease, prior to Rice protesting. “Every year the budget comes up there’s a decrease in EOF,” said Rice. “If we can’t work on an agenda together, we’re going to vote against everything. [with the Latino Caucus, the Black Caucus worked to restore EOF funding].

“We led the charge,” said Rice, sitting between Baraka and Rutgers student Jahkai Harrison. “There’s a network out there and anytime we think it’s going on, we get out the trumpet. When I went to the senate President and said we need to take that $1.5 million and put it back in the budget, he said ‘no problem, we’re going to get it done.’ The governor did this before and whacked us but not this time.

“It’s good to run for president sometimes,” Rice added with a devious grin.

“We do budgets every year,” said Sweeney. “They’re more than numbers. They’re lives.” He took pains to thank Rice for his advocacy. 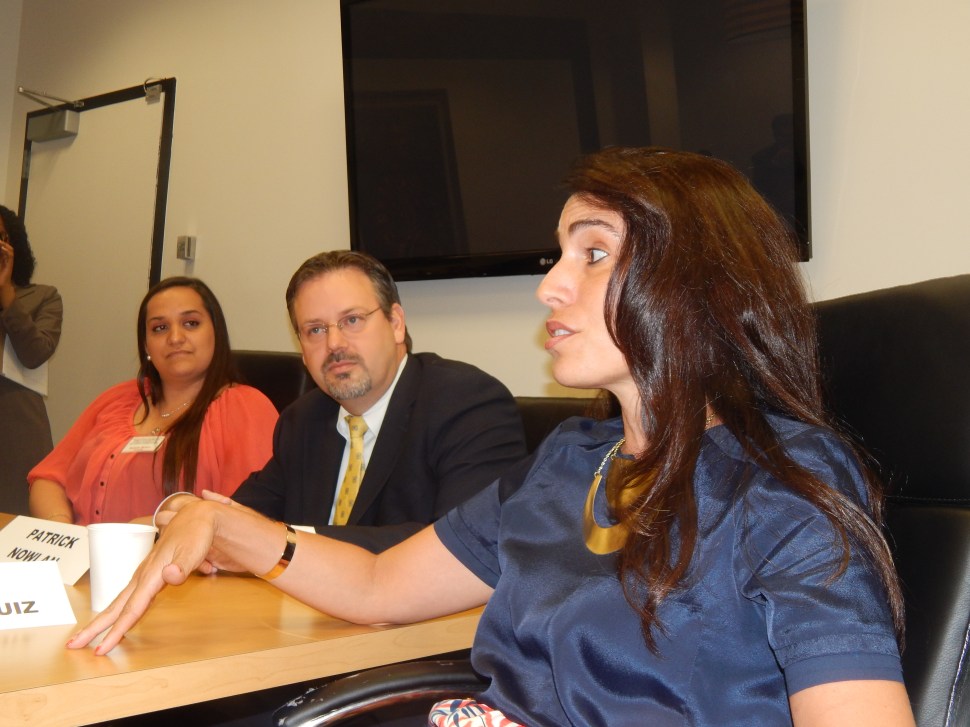 Chair of the Senate Education Committee, Ruiz talked about making college more accessible and EOF “allows that in extraordinary ways. It allows you to get in without having to claw your way.”

Only gentle rivalries abided at the table.

“Just not Jersey City.” Cunningham stabbed the remark with a smile.

Sweeney didn’t mention Camden at that point. The Senate President was in Newark. 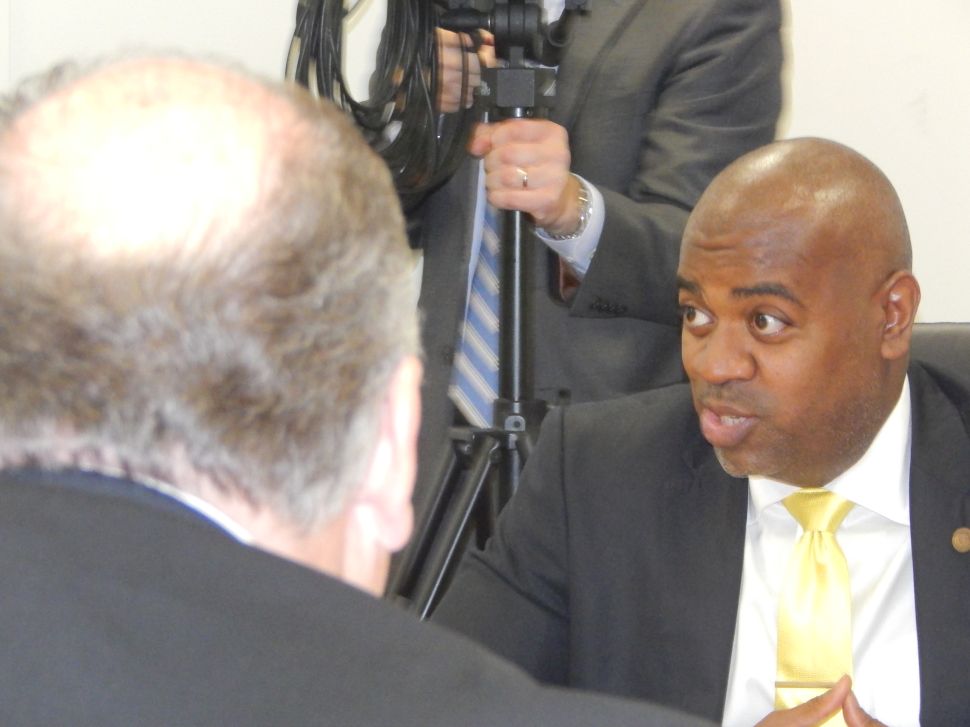