A day after activists and the families of civilians killed by police demonstrated outside Gov. Andrew Cuomo’s Midtown office, they joined him at John Jay College as he signed an executive order making Attorney General Eric Schneiderman the special prosecutor for all cases statewide in which an officer is responsible for a civilian’s death—making New York the first state to create such a role to oversee the controversial issue of police-involved homicides.

The order was slightly different from the one that Mr. Cuomo promised to sign last month, and which provoked some outrage among police reform advocates because it would have only remanded cases where police kill an unarmed person over to the attorney general to investigate. The one he approved today will additionally give Mr. Schneiderman power over cases where there is dispute over whether the deceased had a weapon.

Sitting beside the governor was Constance Malcolm, the mother of Ramarley Graham—a black Bronx youth police shot in his bathroom—and in the audience was Gwen Carr, the mother of African-American Staten Islander Eric Garner, who died a year ago in an apparent chokehold administered by a white officer.

Neither case resulted in an officer being put on trial for the killing.

“This situation that we’re addressing is a crisis. It’s a crisis in this state, and it is a crisis nationwide. It is a crisis of confidence in the criminal justice system. It is a crisis of trust. And the system does not work without trust,” he said. “When a community doesn’t have trust for the fairness of the criminal justice system, it creates anarchy,” the governor said, rattling off the names of nonwhite New Yorkers who died at the hands of police, as well as that of late Ferguson teenager Michael Brown, Baltimore man Freddie Gray and Charleston, S.C. resident Walter Scott. “Our goal is to reverse the energy, reverse the momentum, reverse the dynamic and start to build trust.”

The cause of the distrust, Mr. Cuomo argued, was the perception that district attorneys work too closely with local police on a day-to-day basis to fairly prosecute cops when they face allegations of misconduct. The governor was careful to say that he personally did not believe there was a real conflict of interest for most DA’s in most cases, and praised the work of New York State’s local prosecutors. Nonetheless, he asserted that appearances are as important as realities.

The governor had initially proposed in his State of the State address in January a law allowing a governor-appointed monitor to review sealed grand jury records in cases where a police officer is not indicted after having killed a civilian. The monitor would then recommend to the governor if it is appropriate to appoint a special prosecutor.

The bill passed the Democrat-dominated Assembly but failed to clear the Republican-run State Senate. Mr. Cuomo praised the families of those killed for remaining calm throughout the process, which he contrasted with the reaction in other states.

“When you start to have this conversation it gets very hot, very emotional, it gets racial, it gets controversial, and that then impedes progress. People start to think emotionally, and feel emotionally and stop thinking logically, and when this conversation has been happening in other parts of the country, the dialogue turned frankly ugly, and it turned ugly quickly. That did not happen here in New York,” he said. “I’m very proud of them and what they’ve accomplished. They’ve changed the system. And New York is a national leader because of their concerns.”

Mr. Schneiderman, who first asked to be made special prosecutor last year, asserted that the executive order was the beginning of a more substantial overhaul of what he called “a system of mass incarceration” afflicting nonwhite communities.

“I can assure you that our office will handle these cases with the highest level of care, professionalism and independence, that we will investigate thoroughly and impartially and that we are going to view this as a step toward greater reforms, because there are many reforms needed in our criminal justice system,” he said.

The executive order will grant Mr. Schneiderman the power to prosecute cases in the next year, and possibly beyond that if the State Legislature again fails to pass a bill addressing the issue. He will not be able to reopen past cases, or take over those that are currently ongoing—like that of Officer Peter Liang, whom a Brooklyn grand jury indicted last year for shooting unarmed Akai Gurley in a darkened stairwell.

Brooklyn District Attorney Kenneth Thompson, who impaneled the grand jury, has been an outspoken critic of Mr. Schneiderman’s proposal, arguing it is an unworkable infringement upon the powers of local prosecutors. Mr. Thompson will still be handling Mr. Liang’s case, since it was open prior to the signing of the executive order. 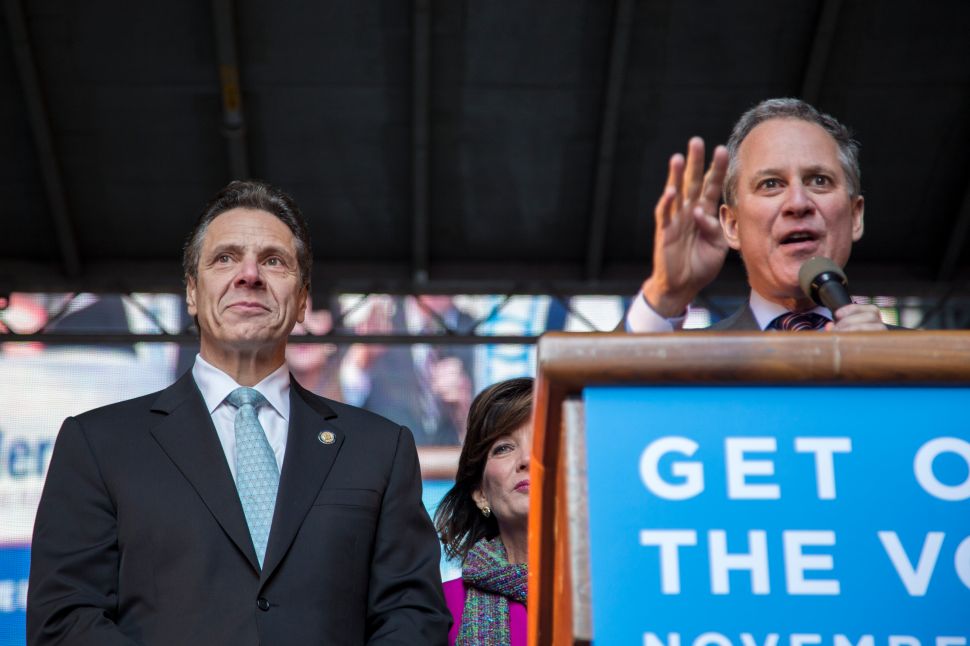