Part of what makes opera seem, at least, a camp art form is that fans of the genre have such inconsistent taste. The works generally recognized by critics as masterpieces—Le Nozze di Figaro, Die Meistersinger, Otello—all certainly get respect from the opera buffs, but beyond “Oh, and Figaro, of course, genius, pure genius,” there’s not a lot of sheer love for these pieces, of the unconditional  “oh, I’ve had that on repeat for two weeks and I don’t think I would know what to do at the gym unless it was playing” variety.

No, what a lot of opera queens flock to is a corner of the repertoire that can be best labeled “guilty pleasures,” pieces we all know are of dubious artistic quality—but what fun to listen!

A lot of bel canto, for instance, is guilty pleasure. Not Norma, of course, or Semiramide: those pieces are musically strong from overture to finale. But what about Bellini’s Il Pirata, a tired rehashing of the “I-thought-you-were-dead-so-naturally-I-married-your-worst-enemy” trope, garnished with an absolute gem of a mad scene?

Even great composers write guilty pleasure operas. The closest Wagner got to camp in his career was the potboiler Rienzi, a deliberate attempt to dumb his work down enough to please the box office. And Verdi stumbled onto some peculiar dramatic subjects that failed to inspire him musically: Attila, I Masnadieri, arguably Les Vêpres Siciliennes.

But there’s one major composer whose operatic oeuvre consists almost completely of guilty pleasure works, and that’s Richard Strauss. His early one-act shock pieces, Salome and Elektra, remain effective examples of the loony diva genre, but after that the template became Der Rosenkavalier, a handful of breathtaking moments strewn across what sounds (to the bulk of the audience, who are biding their time until “the Trio” happens along) like four hours of the orchestra improvising noise.

What’s worse, as his career progressed, Strauss chose increasingly strange and/or inhuman subjects for his operas: Ariadne auf Naxos is a backstage play-within-a-play, Die Frau Ohne Schatten an overwritten symbolist tirade on the theme that women don’t really exist unless they’re pregnant, Intermezzo an elaborate practical joke on the composer’s termagant wife, and Die ägyptische Helena, a melange of Homer, Euripides and Goethe, with a gag about wireless radio technology thrown in. Despite all that, nobody knows the score beyond the heroine’s five-minute wail of B-major sexual ecstasy that opens the second act, “Zweite Brautnacht!”

The Cleveland Orchestra was the star here;
it sounded absolutely radiant from
the wispiest pianissimo to the most thundering fortissimo.

These peculiar dramatic themes were the pet projects of Strauss’ longtime collaborator Hugo von Hofmannsthal, who died before putting the finishing touches on their final show, the debutante-in-peril sitcom Arabella. After that, Strauss floundered a bit—it was by then the mid-1930s and talented Jewish writers like Stefan Zweig were leaving Germany in droves—and settled on the dramaturg Joseph Gregor, who churned out a series of escapist librettos mostly based on classical mythology.

Most escapist of all perhaps was the one-act “bucolic tragedy” Daphne which premiered in Dresden in 1938 and was revived for a concert performance last Wednesday by the Cleveland Orchestra as a feature of the Lincoln Center Festival. It’s a version of the myth of the nymph Daphne who is terrified of contact with the human world and even rejects the advances of the god of light and reason himself, Apollo. Finally the god grants her wish for utter passivity by transforming her into a laurel, and, yes, the last half-hour of this opera is a depiction of a soprano turning into a tree.

It’s disconcertingly creepy to hear a piece from Germany in 1938 that begins with the leading character begging for night not to fall, and the pleasure here—Strauss is at his autumnal yummiest—cannot be separated from a real sense of guilt. And there’s something doubly revolting about an important, highly respected artist whose reaction to a world crisis is to write a purely escapist work on the theme of escapism.

Yet, opera queen that I am, it’s hard to stay angry at such pretty music played so gorgeously. The Cleveland Orchestra sounded absolutely radiant from the wispiest pianissimo to the most thundering fortissimo, and even in the iffy acoustic of Avery Fisher Hall, there was a sumptuous bloom in the tone. Conductor Franz Welser-Möst led in great sweeping arcs, one phrase dovetailing into the next like a relay of polished ballroom dancers.

The orchestra was the star here; the singers consisted mostly of unfamiliar names that I think we can predict will grow more familiar over time. Young Regine Hangler began the long and high part of Daphne with a slight flutter in her lyric soprano, but her sound consolidated and grew throughout the intermissionless 100-minute opera. Her slim, silvery tone exactly suited the elusive personality of Daphne, and her sensitive control of dymanics helped keep the lengthy final monologue interesting.

In ideal contrast to Ms. Hangler’s maidenly singing was Andreas Schager’s hell-for-leather attack on the unrealistically high tessitura of Apollo’s rapturous music. His is a big, virile voice betrayed only a hint of strain on the topmost tones, and, unlike most tenors who specialize in this difficult music, he sang with utter frankness, as if the music on his stand were “Nessun dorma” instead of “Jeden heiligen Morgen.” The highest compliment, in fact, to Mr. Schager’s total performance was that he made Apollo seem so irresistibly sexy that Daphne’s rejection of him made even less dramatic sense than usual.

Among the strong supporting cast, the quality voices of tenor Norbert Ernst (as Daphne’s hapless boyfriend Leukippos) and bass Ain Anger (as Daphne’s river-god father) were standouts. And it was a real luxury to hear the Met artists Matthew Plenk and Ryan Speedo Green in the brief lines of the Shepherds.

I don’t think I will ever call Daphne one of my favorite operas, but a superb performance like this one from the Cleveland Orchestra does provide immense pleasure—so much pleasure, in fact, that questions of guilt can be left for another day. 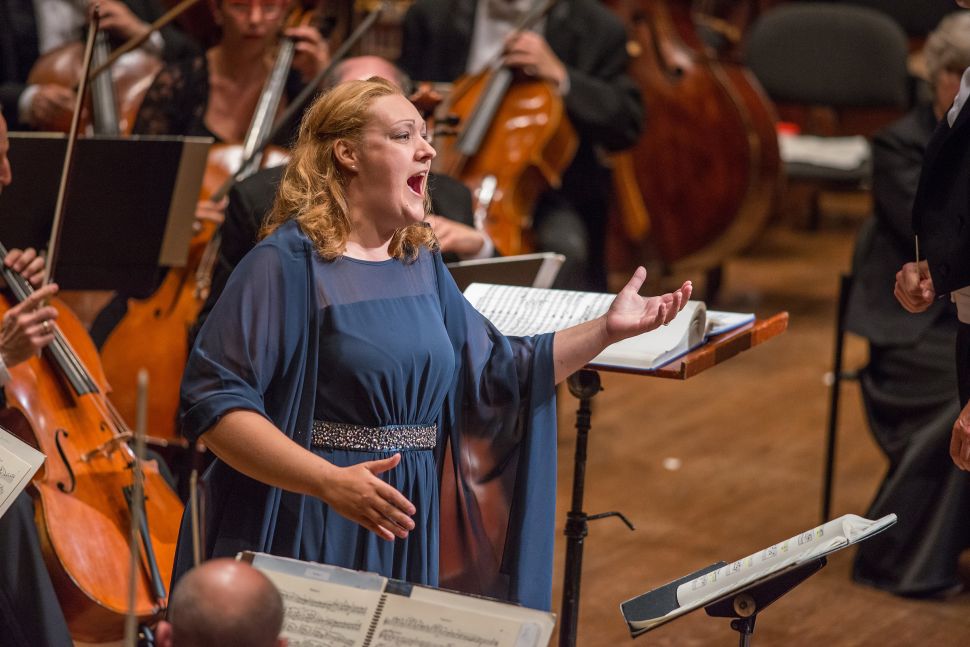