The art world will descend on the Emerald City on July 30 for Seattle’s first large-scale art fair in years.

You could almost see this as the city’s first major fair ever, because it has such an eye-opening pedigree: The 2015 Seattle Art Fair is the brainchild of Microsoft co-founder, chairman of Vulcan Inc. and prominent—but private—art collector Paul Allen.

Called up by Mr. Allen, and organized by the young and ambitious team at the Brooklyn-based Art Market Productions, Max Fishko and Jeffrey Wainhause, the fair will run from July 30 through August 2. It will fill the CenturyLink Field Event Center with a relatively select bunch of about 60 galleries, ranging from blue-chips like Gagosian and Pace to local powerhouses like Greg Kucera and James Harris.

“We wanted a representative spectrum of galleries encompassing the Midwest and both coasts of the U.S.—as well as Canada and Asia,” said art dealer Eric Gleason, a director at New York’s influential Paul Kasmin gallery. Mr. Gleason is one of five on the fair’s dealer committee, responsible for attracting galleries to the fair.

Said co-organizer Mr. Fishko, who has run fairs in the Hamptons and Texas, “The important part of this show is to create something that can’t be seen elsewhere” and that pays tribute to the local scene and tastes. “There’s no point in doing something that could be seen in Miami or Switzerland.”

The deliberately wide range of gallery locations, and of price points in the material they bring, indicates that the fair has been carefully tailored to fit the tastes of the area’s collectors—and there are many. More than the wider art world is probably aware of, and they are by no means “new money.”

There’s Jon Shirley, president of Microsoft from 1983 to 1990, who, (amassing a trove with his late wife Mary), is a major collector of Calder, Lichtenstein, Close and Chihuly. The couple joined the board of the Seattle Art Museum in 1997, gave $30 million to SAM for an endowment and to buy land for its public park, and backed the museum’s acquisition of Calder’s monumental red-steel sculpture Eagle, now a Seattle landmark.

Also on the board at SAM is philanthropist Janet Ketcham, whose collection boasts works by Picasso, Matisse, Diebenkorn, Fischl and Hockney. Ms. Ketcham famously sold a 1992 painting by Lucian Freud, titled Ib and Her Husband, for $19.3 million at Christie’s a few years ago.

There are many more. Dick and Betty Hedreen, downtown Seattle real estate developers fond of modern and contemporary works, have been featured on Artnews’ Top 200 Collectors list. Michael and Barbara Malone, owners of Seattle’s Sorrento Hotel, are supporters of the Frye Museum and also on the board at SAM.

Do Seattle collectors share a common thread with their tastes? Lori Uddenberg, who sits on the board of the Tacoma Art Museum and splits her time between Seattle and Rhode Island, said of her neighbors, “I think they do collect a lot regionally.” She personally is an impassioned collector of artists from the Pacific Northwest—even collecting multiple pieces by the same artist.

But, with more international and national artists headed to Seattle, it has definitely broadened “the amount we’ve got to choose from,” she said. She credits Seattle dealers like Stacey Winston Levitan, co-founder of Seattle and New York galleries Winston Wächter Fine Art, and Mr. Kucera, who founded his eponymous gallery in 1983, with introducing more international talent to the scene.

“Seattle’s collectors are as knowledgeable and active as any outside of NYC and L.A., but they rarely get credit for it,” noted Mr. Gleason. “Part of this is probably related to their locale, but part is also likely a result of their discreet nature.”

Mr. Allen is famously quiet about his collection—he owns major works by Rodin, Calder, Monet, Rothko and Gauguin, in addition to massive amounts of music and Star Trek memorabilia. Through his company Vulcan, he spearheaded a mass of office buildings and apartments in the city’s South Lake Union district across 55 acres, and effectively revitalized the formerly industrial area; a new arts center is also in the planning stages.

“Paul Allen is a tremendous Seattleite who has done an unbelievable number of great things for the City of Seattle—the Fair is just one of a series of things he’s sponsored and encouraged at a time when the city is ready to be on the national stage,” said William Ketcham, son of collector Janet Ketcham and an art buyer himself.

The Paul Allen connection certainly waves  the flag for the area’s tech-industry heft. There’s Microsoft, Amazon, CenturyLink, Tableau and Zillow, to name a few. But tech money is certainly not enough to spell art fair success, as witnessed in 2014 in California with the inaugural editions of Art Silicon Valley and Silicon Valley Contemporary; both garnered high attendance but unspectacular sales.

Mr. Gleason said, “Silicon Valley is also in its infancy in terms of collecting…whereas the Seattle community has been collecting fervently for well over a century.”

Ms. Uddenberg said she’s been collecting for nearly 15 years, and her collection includes about 200 pieces, including those by Bo Bartlett, Charles LeDray, Esther Shimazu and Tony Scherman.

“Charles LeDray was originally a guard at the SAM. When he had a big show of his work at the Whitney, I must have gone about 20 times…I was so obsessed with him.” Ms. Uddenberg now owns several sewn textile works by the artist.

Seattle Art Museum director Kimerly Rorschach told the Observer that “the significance of the fair is that there are a lot of people in Seattle who could potentially collect” and who have “been successful, are quite young, and have been able to do it locally but not in a broad way.”

“To have these galleries coming—with the visibility of the fair thanks to the involvement of Paul Allen—is to give these people an opportunity,” she said.

Ms. Rorschach, who joined SAM as director in 2012, explained that the museum has only just begun to add programming focused on area collectors, such as the Contemporary Collectors Forum, but that it is looking to add series for younger people who want to learn more. Events like the fair are a welcome addition. “There’s a potential to grow a lot more,” she said. “The story here is more about the future than the past or present.”

So far, the fair is relatively small at about 60 galleries. Kasmin’s Mr. Gleason explained: “It was important to have a tight group of galleries, especially for the inaugural year so as not to overwhelm either side. Both the galleries and collectors involved hope that this [year] fosters long-term relationships.” 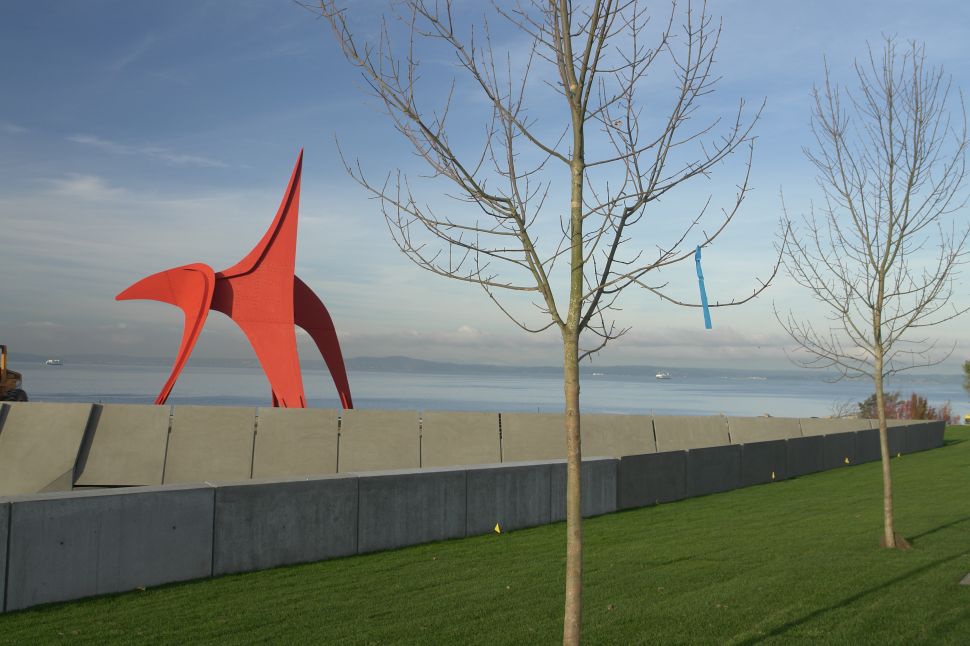