In college, I took Emily Dickinson to bars. I had a Dickinson seminar to prepare for, and I thought we both needed to get out. I would find a back booth with just enough light to read, order a beer, and open my copy of the Final Harvest collection. Soon I was lost in the corridors of her peculiar imagination while the noisy crowd around me practiced their ancient rituals of courtship and combat. The others had come for pizza, pitchers, and communion with friends, but ED and I had come for a more intimate kind of fellowship.

Many introverts love to cook, but no one wants to cook everyday. Same for doing dishes. Once in a while, it’s nice to have somebody else do these things for you, and as a result, a drink or a meal out can be a special pleasure. But dinner comes at both a social and economic cost. Despite the many delights restaurants and bars have to offer, they also represent a hostile environment for the introvert.

The goal of the outing is quite simple. An introvert out on the town would like to eat or drink quietly with as little interaction with staff and fellow patrons as possible. Ideally it would be nice to linger for a while without being interrupted.

Unfortunately bars and restaurants are some of the least likely places to carry this off easily. Despite the many new ways of finding and meeting people, bars and restaurants are still considered fertile ground for prowling singles in search of mates or mopey loners in need of a sympathetic ear. These people are the enemy. They are precisely the kind of obstacles the introvert hopes to avoid.

Sadly, according to some cultural standard that introverts never agreed to, a person sitting alone is considered fair game. You are assumed to be alone out of necessity rather than choice, and as a result, many extroverts operate under the misguided assumption they are doing you a favor by striking up a conversation. Nothing could be further from the truth.

As always, introverts hope to cultivate the impression that they are polite and harmless but prefer to be left alone. Here are a few tips gleaned from a lifetime of introverted eating and drinking out.

It is a good idea to avoid fine dining. At a busy upscale restaurant, the staff will be overly attentive and may subtly pressure you to give up your table too quickly. Instead of a relaxing sojourn, you are likely to come away feeling well-fed but pestered. So save the upscale places for a social outing with friends. Instead, try a weeknight visit to a moderately popular mid- or low-priced venue.

Bars are a mixed bag. On the positive side, you can stay as long as you like. Drinking is assumed to be a longterm proposition, so you will almost never be hurried along. In addition, depending upon the place, you can often get a decent meal.

But bars are also ground zero for the traditional pickup scene, and many of your watering hole neighbors will be looking for companionship. It will be important to make it clear that you are not there for the Cheers experience. Introverts prefer a place where nobody knows your name.

Although it may seem paradoxical, a crowded venue can be an excellent choice for an introvert, both because you can hide behind all those bodies and because the extroverts in the room have a greater chance of finding each other.

One evening I needed to get a bite before going to a play, but when I arrived in the vicinity of the theater, I discovered there was a Phish concert a block away and the area had been invaded by thousands of vagabond fans. All the restaurants were jammed, so I ended up at a crowded bar. An Irish band was playing, and most of the patrons were either dancing or shouting over the sound of the music. I was the guy standing at the bar — because there was no place to sit — with a hamburger in one hand and a copy of Franzen’s Freedom in the other. Despite the chaos of the scene, I had a remarkably pleasant time. No one said a word to me.

To protect your solitude, it is a good idea to position yourself in an out-of-the-way place. In a restaurant this means a table off in a corner and out of the traffic flow. You want sufficient light to read, but you don’t want people passing by your table. There is nothing more disruptive than an accidental encounter with a lonely diner who — consciously or unconsciously — is hoping to duplicate some meet cute scene from a romantic comedy.

Once you find a suitable table, sit yourself in such a way as to minimize the possibility of eye contact with others. Although it will be inconvenient for the waitstaff, the best placement is a table far away from the crowd. The second best configuration is to be near a large group because they are likely to be preoccupied with each other and leave you alone.

The most dangerous situation is to be seated near a fellow singleton because there is no way to be sure your neighbor is another introvert. Introverts are like little neutrons bouncing through the universe without any particular charge pulling them around. In contrast, extroverts and lonely people are charged particles — ions hoping to share their bonds of attraction with someone else. Unless you are certain your neighbor is another neutron, it is best to keep your distance.

Sitting at a bar can be a very enjoyable way to spend an evening, but the person alone at the bar is particularly vulnerable to approach by others. I’ve found that sitting at one end of the bar is a good strategy. You may be a little neglected by the bartender, but you will have reduced your social exposure by half. When you make your camp on the east end, you are only open to attack from the west. And vice versa.

Some people bring paperwork or a laptop, but, to me, this is a waste of a pleasant outing. Coffeehouses, home, or the office are better suited to work. However, it isn’t a good idea to sit by yourself with no prop at all. As entertaining as it may be to spend an evening alone with your thoughts or to observe other diners from a safe distance, these activities invite unwanted interaction. Most people witnessing a fellow diner with nothing to do will interpret your situation as a cry for help. They will feel obligated to throw you a lifesaver in the form of a conversation or — in the worst possible scenario — an invitation to join them at their table. So your best companion will usually be some form of reading material.

Choose your companion wisely. No matter what, some people are going to think that whatever you are reading is a substitute for social interaction, a kind of temporary placeholder. They assume the solitary diner would really prefer to be talking to some interesting person — like, for example, themselves. Although it is certainly not your intention, you may inadvertently reinforce this impression by choosing a flimsy form of reading material. Newspapers and magazines can send the message that whatever you are reading is short and not very absorbing — quite literally light reading that can easily be tossed aside.

What you want on hand is a solid book or perhaps a tablet. Something that suggests you are deeply submerged in the author’s world and have no interest in coming up for air.

If you are reading an actual physical book, do your best to hold it in a way that hides the cover. There is a common variety of schmoozer who thinks commenting on your book is an effective opening gambit: “Oh, I liked that one a lot.” Or, even more insipidly, “I heard that was a good book.” This can be the beginning of a sticky, unwanted conversation, so hold your book close with the cover out of view.

Once loaded onto a tablet, all books look the same, making it easier to avoid discussions about what you are reading. But the tablet itself may draw attention. “My wife has one of those things. How do you like yours?” To defend against this social ploy, do your best to handle the device as discreetly as possible. Try not to make it look too bright and shiny.

Spending an evening reading things on your smartphone is not ideal, but it will suffice in a pinch. Unfortunately, the smartphone is the electronic version of a newspaper or magazine. It is unlikely to project the image of deep absorption that is most conducive to being left alone.

Whatever you choose as your dining companion, it is best to place it directly on the table and hunch over a bit with your gaze angled downwards toward your food and the page. This posture will make it difficult for those around you to catch your attention and will signal that you are content in your isolation. If you need two hands to cut your pork chop, place your smart phone or a tightly sealed ketchup bottle across your open book to keep the pages from flipping.

No matter how carefully you plan your outing, from time to time the introverted diner will have a less-than-perfect experience. There is the awkward coincidence of spying a friend at the next table. You’d really like to keep plugging away at The Goldfinch, but you worry that you’ll appear rude if you don’t say hello. Or, having ordered a gin and tonic and settled in at a bar, you may suffer the advances of a talkative out-of-towner. In these cases, you may go home somewhat unsatisfied.

But most of the time, introverts love an evening out. The true introvert is as comfortable alone in a busy restaurant or bar as they are anywhere else. And, if you are lucky, on any given evening, a polite nameless person will step out of the crowd, hand you a menu, and slip away. You will look down at the choices and smile, knowing that this is the beginning of another wonderful time spent in the company of Emily Dickinson, Jonathan Franzen, or Donna Tartt.

If you liked this article, you might enjoy the previous installments in the Introvert’s Guide series:

An Introvert’s Guide to Greeting Strangers, Vague Acquaintances, and Friends

An Introvert’s Guide to the Coffeehouse Workspace 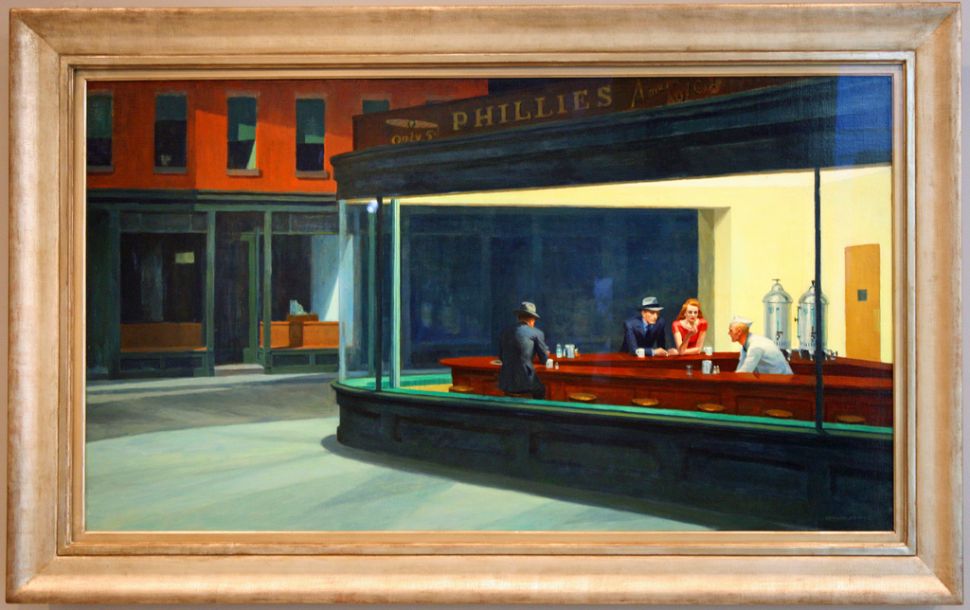