Few things guarantee box-office success in show business more than an evil child. The pathology of children has been a hot subject in everything from movies like Demon Seed and Village of the Damned to novels and plays like The Bad Seed, the literary sensation by William March that was turned into a phenomenal hit play by Maxwell Anderson with a sensational cast including Nancy Kelly, Patty McCormack and Eileen Heckart, and later a spellbinding 1956 film directed by Mervyn LeRoy with the Broadway cast repeating the same hair-raising roles.

With a lineup that great, it’s no wonder The Bad Seed has never been revived, but it was inevitable that four decades later the idea that homicidal tendencies are inherited would return—as a musical! The result was Ruthless!, a campy hit that ran for a solid year in 1992 with a cast that included Sylvia Miles, as well as Britney Spears and Natalie Portman as understudies. When I reviewed it, I called Ruthless! “malicious and delicious.” I’m happy to report the new Off-Broadway revival at the envelope-sized St. Lukes Theatre has lost none of its piss and vinegar.

In the ensuing years Ruthless! has developed a cult following, and on the night I saw it, they were in mob force—moving, pushing and sipping champagne like it was the opening night of Kinky Boots. Be forewarned: this basement theater is all on one level with uncomfortable folding chairs for seats, and the sight lines are terrible. Obscured behind someone the size of Magic Johnson, I could glimpse only pieces of the action, but what I saw was a lot of fun.

Rhoda Penmark, the little angel with pigtails in The Bad Seed who murdered a classmate with her tap shoes to steal his penmanship medal, is now Tina Denmark, 10 years old and on her way to becoming a world-class serial killer. Played by a scene stealer named Tori Murray who looks like Shirley Temple and belts like Ethel Merman, this Lilliputian Lizzie Borden not only uses her tap shoes to kill anyone who gets in her way but uses the murder weapons to sing and dance her way through lung busters like “Born to Entertain.” “I’ve had a normal childhood,” she trills. “Now it’s time to move on.”

And she does, with the help of her mentor-manager, a flamboyant cross between Auntie Mame and Dame Edna named Sylvia St. Croix, played and sung in drag with a basso profundo croak, a bobbing Adam’s apple, a pair of size-11 heels and an abundance of ham, by a scarecrow in pearls named Peter Land. The mayhem they create is merry.

I doubt if half the audience at Ruthless! has ever seen or heard of The Bad Seed, which inspired it, but the diagram is easy to follow. Tina knows show people are “doomed to a life of booze, pills and heavy meals late at night,” but comes by her fate naturally, arranging for the girl who beat her out of the lead in the school play to “accidentally hang herself.” From there, eliminating her adversaries is as easy as trading skate keys. After all, her grandmother (Rita McKenzie) is a vicious drama critic who once wrote a book called Ruthless that destroyed a few people itself. While Tina is away at the Daisy Clover School for Psychopathic Ingenues, her cookie-baking mother Judy (Kim Maresca) discovers she may be the real child of a notorious mass murderess who passed down the homicidal chromosome (at this point, there are so many potential felons falling out of the family tree that it’s difficult to keep up with the crimes).

Anyway, Mom becomes a Broadway star herself, replete with her own ambitious personal assistant named—guess what—Eve Allabout! After a few rough spots that beg for a belt of brandy (it’s unfortunately without intermission), the show becomes an All About Eve cocktail with a Gypsy chaser. And keep your eye on Sylvia St. Croix. She’s not who she pretends to be, either.

The book and lyrics by Joel Paley, who also did the staging, are clever and hilarious; the music, by Marvin Laird, devilishly bouncy. The cast shucks excellent corn, but I especially liked Rita McKenzie as the viperish drama critic who stops the show singing “I Hate Musicals,” and special praise goes to pint-sized Tori Murray, who made me shudder at the thought of what it might have been like in the good old days if Margaret O’Brien had played Jack the Ripper. 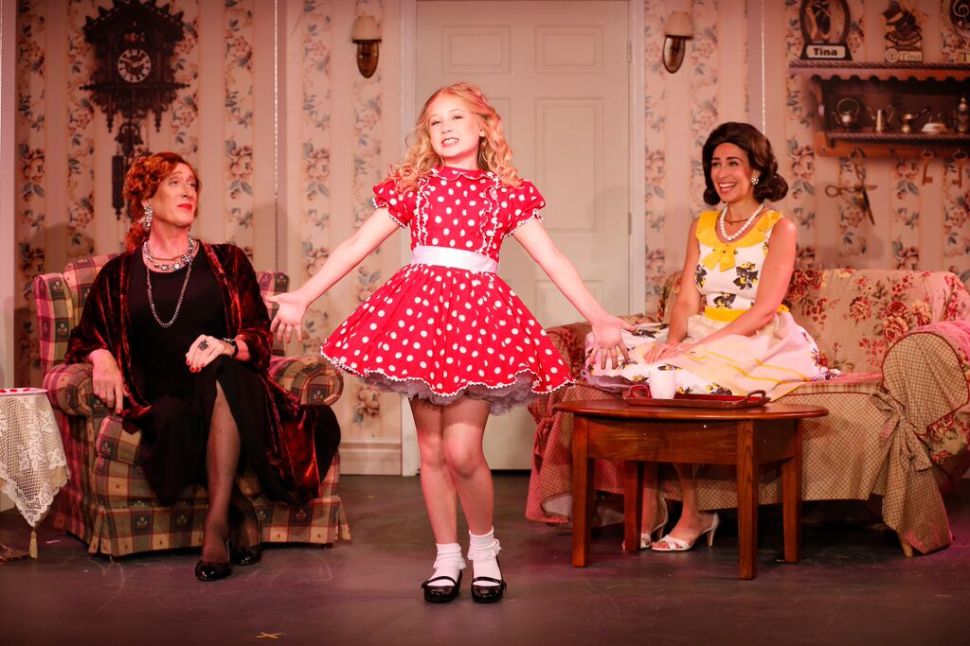