There may be a reason for that.

Democrats are going after Casagrande this cycle in what most see as a strong Republican, Monmouth-based district. ELEC reports show that both Prieto and Assembly Majority Leader Lou Greenwald (D-6) have donated to Casagrande’s and Assemblywoman Mary Pat Angelini (R-11) opponents, Neptune Mayor Eric Houghtaling and Joanne Downey.

The lower house legislative leaders, in fact, maxed out to the Democratic challengers; and to date, Democrats have outraised the incumbent Republicans 2-1 in LD11. Still, it’s seen as a very difficult district to win and may turn into the flavor of the cycle where Democrats play to keep Republicans off balance in those district deemed truly competitive by insiders in both parties: 1, 2 and 38.

The exposure for the Colts Neck Republican may end up proving a good thing for her political career. In the legislature since 2008, Casagrande appears to be in that stage of her political life where leadership will consider moving her up based on demonstrable Statehouse aggression and effectiveness. 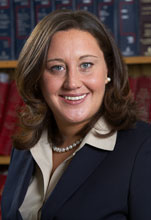