Artist Melvin Way’s intense yet graceful artwork can’t be reduced to a singular classification—it’s too tricky to attempt to nail down something that was made to be so personal. However, it’s undeniably something special.

Mesmerizing drawings by Mr. Way are on view (through July 19) at Christian Berst Art Brut on the Lower East Side of Manhattan, in the exhibition “Melvin Way: Gaga City.” The artist weaves together mathematical equations, fragmented stanzas of poetry, musical composition, and geometric patterns, sometimes toiling over pieces for months, even years at a time. He has been known to carry hundreds of drawings in his coat pockets at once; their inevitable exposure to the elements makes them artifacts of his life as much as his hand.

The artist, who sometimes signs his work Melvin “Milky” Way, was born in South Carolina and raised between there and Brooklyn. He studied briefly at the Technical Career Institute before struggles with mental illness left him homeless and in and out of psychiatric care and the city’s shelter system.

While admitted on Ward’s Island, Mr. Way met artist Andrew Castrucci, who taught art classes to patients. Drawn to Mr. Way’s private but dedicated system of art making, Mr. Castrucci has been a champion, teacher, and collaborator ever since. Collaborative pieces by both artists are on view in an intimate space on the gallery’s second level.

In Mr. Way’s solo drawings on view, which are given titles like Carborane; Orthodontics—the former is a combination of boron, carbon, and hydrogen atoms, the latter a specialty in dentistry—he meticulously builds up the surface with layer upon layer of tape, covering deliberate markings he’s thickly drawn in ballpoint pen, and leaving the remnants of older thoughts obscured but sometimes still visible beneath an edge.

Deciphering the drawings is something only Mr. Way can do, but each is a sort of three dimensional thesis; compressed like a digital file might be on a USB drive, except in this case the information is confined to four-inches-by-five-inches of a reused piece of scrap paper. Each drawing is edited down to a refined—almost elegant—haiku.

Mr. Way’s work has been garnering attention and has been included in major exhibitions at London’s Hayward Gallery, the American Folk Art Museum, and Artists Space, and can be found in the Collection de l’Art brut in Switzerland and the American Visionary Art Museum in Baltimore. “Melvin Way: Gaga City” closes Sunday. 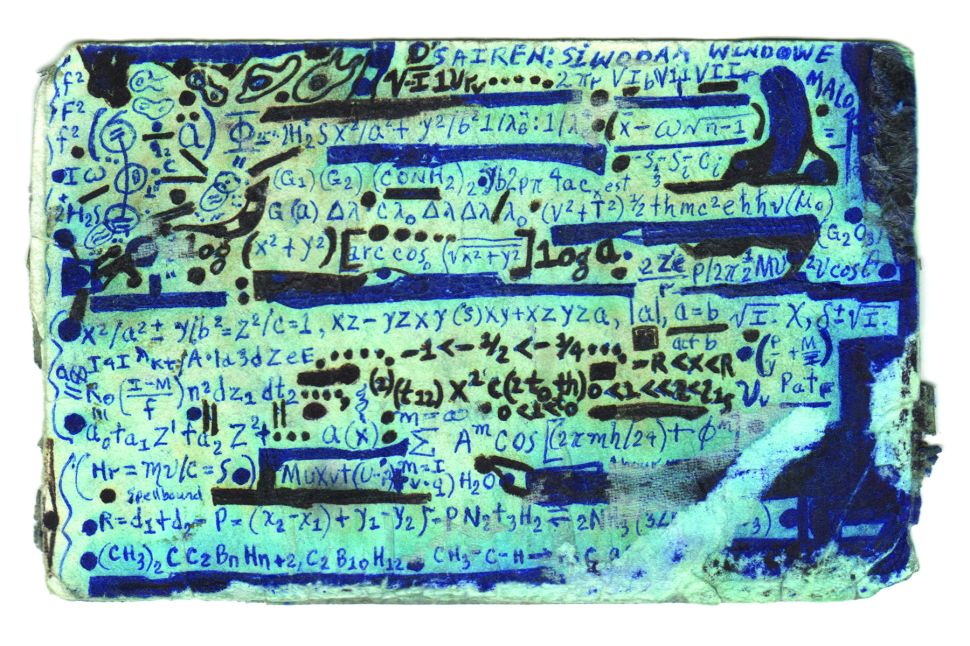