Artist Paulo Cirio is trying to turn the tables on the National Security Agency.

Initially set off by the Snowden Affair, Mr. Cirio is publicly shaming high-ranking U.S. intelligence officials for their surveillance of the American public with his street art project, Overexposed, a series of nine unauthorized pictures of NSA and Central Intelligence Agency personnel made from stencils, transformed into either large posters or graffiti.

Mr. Cirio picks awkward and unattractive photos found on social media, such as selfies and candids, crops them ever so closely, and hangs them up in major cities, including New York City, London, Berlin, and Paris.

“They are meant to embarrass the officials,” Mr. Cirio told Hyperallergic.

The whole point of the project is to “[satirize] the era of ubiquitous surveillance and overly-mediated political personas by exposing the main officials accountable for secretive mass surveillance and over-classified programs,” Mr. Cirio said in a statement. In other words, he’s avenging our privacy.

Mr. Cirio also created an online catalogue that includes write-ups with the photos that not only mock each official’s appearance, but also detail their, erm, career missteps.

“With his mouth gracelessly open, the most controversial CIA figure of the last two decades appears preoccupied with an unfinished sentence,” Mr. Cirio wrote beneath the photo of John Brennan, the director of the CIA.

“As director of the CIA, John Brennan is responsible [for] violating several human rights and international laws…John O. Brennan also repeatedly lied about the civilian casualties caused by the highly secretive drone program [15] which for years had neither been disclosed to the press nor to U.S. government oversight committees.”

Mr. Cirio is an Italian conceptual artist whose work examines privacy, information distribution, and systems of control using technology and media. In Paywall, one of his more famous works, Mr. Cirio hacked the websites of The Wall Street Journal, Financial Times, and The Economist and lifted over 60,000 articles. He made the paywall-protected articles available online for five days and paid users to take quizzes on them. 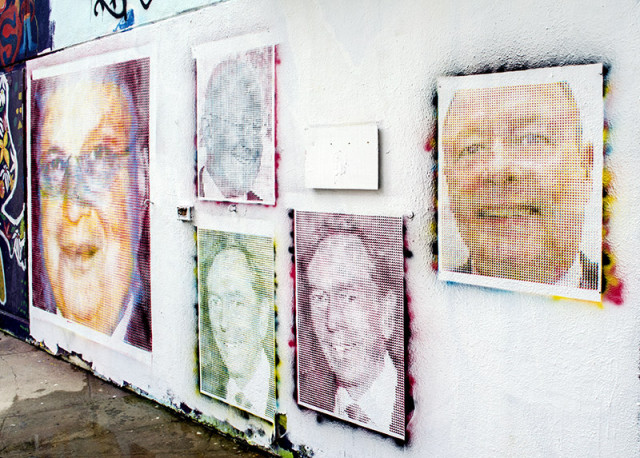