Bounced out of his Assembly reelection bid as a consequence of brass knuckle Hudson politics, lame duck Assemblyman Carmelo Garcia (D-33) is running for a local council seat in his hometown of Hoboken.

An incumbent this year after having served one term in office, Garcia ran afoul of the Hudson County Democratic Organization (HCDO).

Now he wants to put incumbent Ward 6 Councilwoman Jennifer Giattino out of office in November.

“To be honest, no one has seen Giattino much,” said a Hudson source close to Garcia. “Carmelo is actually gaining traction, due to his highly visible nature. When you combine his natural personability but also his intellect, its a killer combo. Formidable support is lining up behind him – hes a new generation guy with deep roots in Hoboken. Another killer combo.”

Garcia is the second former Hoboken assemblyman in the last three years to attempt to make a return to local politics following state Senator Brian P. Stack’s decision (D-33) not to reenlist their services. Jettisoned in 2013, former Assemblyman Ruben Ramos turned around the same year and ran unsuccessfully for mayor.
Like Garcia, an ally, Ramos is running again locally this year, challenging Ward 4 Councilman Tim Occhipinti.
Former Assemblywoman Caridad Rodriguez (D-33), who debuted as an assembly candidate with Ramos in 2007, left the legislature in 2011 to successfully run for a West New York Commission seat on Felix Roque’s slate. She served a term in local office. 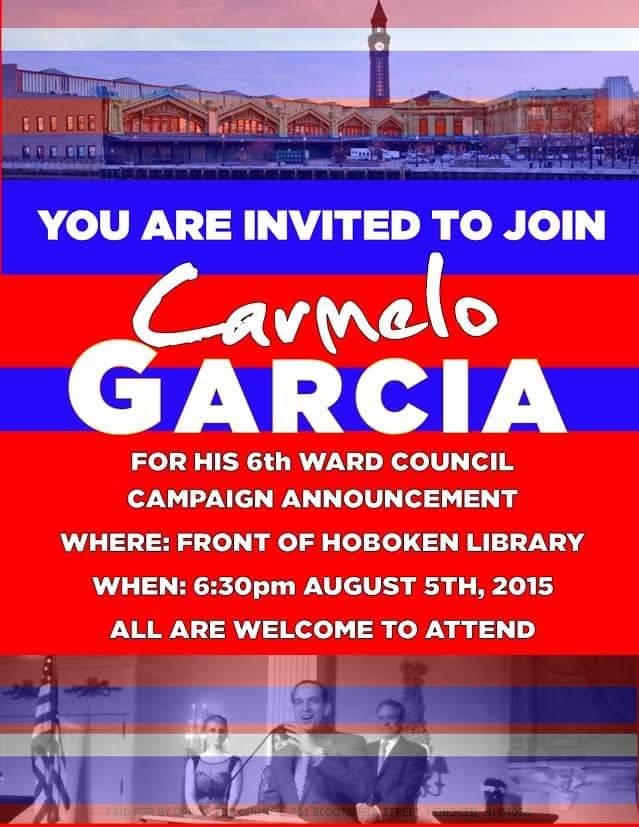