Works from the exhibition “When You Cut into the Present the Future Leaks Out,” which opened April 23 in the Old Bronx Borough Courthouse to a small protest from community members (Photo: courtesy of No Longer Empty’s website).

The Old Bronx Borough Courthouse has been empty for the past 37 years. That is, it was empty until No Longer Empty, a New York nonprofit that stages art exhibits in abandoned spaces, opened its new show there April 23.

The exhibit filled the once grand rooms with works from 26 artists, including Ivan Navarro, Ellen Harvey and Shellyne Rodriguez. The show, ‘When You Cut into the Present the Future Leaks Out,’ was curated by Regine Basha.

However, not everyone welcomed NLE’s exhibition with open arms. Seven protesters, mostly black and Latina women, demonstrated during the opening, reported art website Hyperallergic, in an extended feature on the exhibition and resulting controversy by Jillian Steinhauer. They were chanting, “Don’t use art to pimp us out.”

One of the protestors was Wanda Salaman, executive director of local nonprofit Mothers on the Move. 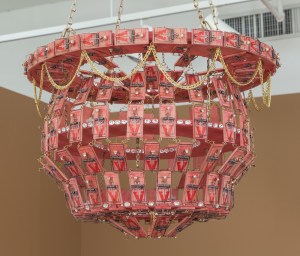 The sculpture Prototype for Belphegor’s Eye by Shellyne Rodriguez is made of mousetraps and featured in the No Longer Empty show (Photo: courtesy of the artist’s website).

“What triggered me is I’m hearing about this attraction party at the Old Courthouse,” Ms. Salaman told Hyperallergic. “Then when I’m going to the location of the event, I see all these people coming from all over, not from the neighborhood, going to the opening. It was very overwhelming, for me and for people in the community.”

But the protest was only the beginning. According to Hyperallergic, one of the many events NLE planned to promote the show was a party for real estate brokers. It was scheduled for June 16 with the intention to “introduce people to the neighborhood.” This, understandably, sparked fear of the neighborhood being “pimped out”–to gentrifiers.

Some of the community organizations and artists featured in the show were confused and angry when they found out about the brokers’ party. After a meeting between community groups, NLE staff members and artists on May 30, the party was cancelled.

Bronx native and featured artist Ms. Rodriguez said that she acted as an emissary between the community and the arts organizations but felt torn by her two roles as artist and community member.

“Artists are not the root cause [of gentrification],” she told the blog. “But artists are well aware at this point that we are the bees to the honey.”

At a June 18 panel entitled “Shifting Sands: New Dynamics in the Bronx Art Scene,” several community members raised concerns about the presence of new characters and money in the Bronx arts, Hyperallergic noted.

“I think we have to be very careful when for-profit developers tell us they’re here to help the community,” said Michael Kamber, founder of the Bronx Documentary Center, at the panel. “These things don’t happen in a vacuum. If you look at what happened in Dumbo, on the Lower East Side, in Williamsburg, artists become part of the strategy for real estate investors. They use the cachet and the creativity of artists to make money, and in the end the artists are the ones that get pushed out—artists and low-income people.” 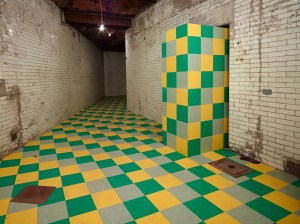 Untitled by David Scanavino in the Old Bronx Borough Courthouse (Photo: courtesy of the artist’s website).

NLE, for its part, is working to involve the community with a four to six month “community visioning phase” for the building that will involve discussions with locals on ways to work with the building’s private owner.

“[NLE staffers] have been trying,” Salaman said. “They just have no idea what they were getting into.”