NEWARK – One life lost is unacceptable, Mayor Ras Baraka told the media and community members in the South Ward Police Station this afternoon. He doesn’t like comparing crime numbers from year to year to discern anything to celebrate or anything that would cause him or his team to lose focus on the utter eradication of violence from his city. But the grassroots-grown Baraka does want greater local authority over how his officers are trained, and how many he can train, and to that end he’s meeting with Acting Attorney General John Hoffman next week to wrangle up a city-operated Newark Police Academy.

While murders were the same in Newark with fewer resources, shootings have increased, the mayor noted. “We have to do something different,” he said, speaking to more intensified efforts by his administration and the local police with county and state government in concert with a focus on reclaiming the police academy and greater police outreach to the community, Baraka said.

“Seventeen murders in June and July is too many,” said the mayor, with Councilmembers John Sharpe James, Anibal Ramos, Eddie Osborne. “It is outrageous and it should not happen. There is no room for 17 people losing their lives. We are not comfortable with the numbers. I am not comfortable talking about numbers when people are dead. …The shootings need to be stopped.”

The Newark Police Academy closed during the tenure of former Police Chief Garry McCarthy, who served Mayor Cory Booker. Since that time, Essex County has handled those duties but Baraka wants the city to reassume control, in part to increase Newark’s ability to train greater numbers of officers to bring the rolls back up to pre-lay off levels.

“We need our own police academy,” the mayor told reporters. “We need help to get an academy. …I think the attorney general understands. More cops equals more visibility and quicker response time. The AG is an ally in this.”

The mayor appealed directly to those residents in the crowd in the press conference room at the police station, calling on them to help the police to stop violent crime. He raised his voice to those in the community who have and would commit violent acts, and on the heels of a rally last weekend by activists against police brutality, Baraka said, “The same way we’re opposed to police brutality, we’re opposed to you brutalizing us too.

“We chalked June and July up to the thugs, but August will belong to us,” the mayor added. “It’s a matter of life or death. It’s not political.” As part of the mayor’s efforts, the City of Newark will hold a citywide anti-violence walk on August 8th.

“It’s everything,” Councilman James told PolitickerNJ regarding the approach the city is taking from top to bottom. “We’re trying to put more officers on the streets, take civilians off desk duty and put them on the street. We did have an academy and we want it back to have more officers back, and at the same time, yes, it’s partnerships with state and county police.” 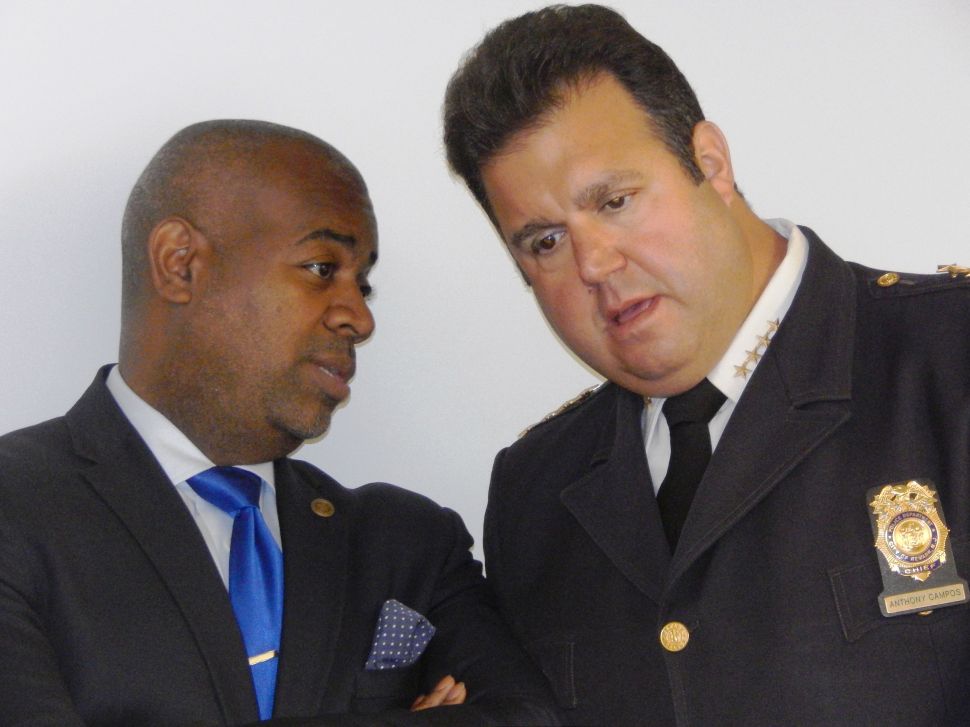