Here’s the thing about week 1. You can’t really call it a “week” because of television production schedules and lunar eclipses it ends up being something like 15 days. The only people who would want a 15 day week are those ones that really hate Mondays. In a 15 day week, you’d only have one Monday. But you’d also only have one Friday and one Saturday. And they’d probably name the other 8 days after Beatles songs or John Wayne movies. Not that “Rooster Cogburnday” doesn’t have a ring to it. It does. But a 15 day Big Brother week is exhausting. In the world of the Live Feeders this has been a lifetime. If you’re only watching the tv episodes you have some relief. You haven’t seen how hard some of these houseguests have overplayed the jump off. The house has flipped more times than a Jace elimination gif (sick summersaults bro).

So after last night, Jace is out. Everyone wanted Jace out. Now he’s gone. That is a blessing if it means no more “bro code” jokes with Austin. Shelltown, their wack alliance is dead. Once upon a time in the world of Big Brother, there was the heavenly triumvirate of Dr. Will, Mike Boogie, and Shannon in season 2. They called themselves Chilltown. Mike got eliminated early. Shannon went soon after and Dr. Will won by being the charismatic anti-hero. After that there was season 7, Big Brother All-Stars. Chilltown returned and took it all the way to the final four by running show romance game and forming an unstoppable alliance. Boogie won but became one of the most hated characters in reality television history when he played out the girl he was claiming to care about. For some reason, lots of people want to be the next Chilltown but that kind of game is antiquated. The takeaway of it all is that there can be no other Chilltown. If your alliance is an homage to Chilltown you are more drop dead than Fred. This season, there have already been 4,000 alliances made and broken before the houseguests even learned each other’s names. For the first six days they just called Johnny Mac “The Dentist” and half the house didn’t even believe he was a dentist. They probably thought he was doing it just for the jokes, shout out to Tim Whatley.

Jace got backdoored, which means that he wasn’t nominated to be evicted straight up. Someone had to win the veto and pull themselves down off the block so that he could be put up without any chance of saving himself. That someone was Steve who pulled an incredible move in a spelling competition. Most of the time, houseguests are just trying to put together whatever letters they can to make the biggest word. Sometimes they don’t even spell real words like when Jeff pulled out TECHNOTRONIX. This kid Steve called his shot. He spelled TROMBONISTS because he actually plays the trombone. That’s like if Christian Bale was competing and he spelled out THE MACHINIST. That’s the Babe Ruth called home run of Big Brother comps.

Once Jace realized he was the target all along this week, he was scrambling to try and flip the house. Flipping the house is when everyone wants you thing but then you figure out a way to make them want another like that episode of ALF when Willy convinces him not to eat the cat. They didn’t show this on the live episode but it lead to the funniest moment of the season so far. Jace cornered Steve and bullied him for about fifteen minutes. I don’t condone that, it was really tense and awkward. But mixed into his guilt-trip, is a golden gem of epic proportions. Here is a transcript:

Jace: Every single one of them calls you GEEK SQUAD MCGEE.

Jace: Every single one of them, the second you leave—

Jace: –they’re making fun of you. I’ve even heard a couple of them say “four eyes,” terrible things bro.

All of this was completely made up. Nobody aside from Jace has ever said “Geek Squad McGee” to another grown human being (until me now, where I will be saying to everyone going forward forever).

Last night’s live episode had a stellar Big Brother alumni cast in the audience. Jeff was there. Dani was there with her husband, Dominic. This is BB royalty. Julie explained the twin twist, that Liz has been switching places with her sister, Julia. They only have ten minutes to catch up when switching places behind-the-scenes in a little curtained area where they switch clothes. It’s the same twin twist as season 5 but I give them credit, it’s almost impossible to tell who is in the house at any point. And they did a live switch during the vote which is like Clark Kent going into a phone booth with Superman and coming out Clark Kent again but it’s a different guy playing Clark Kent.

Kathy Griffin is doing this week’s BB Takeover. Her twist is called Power of The Last Laugh. They’re going to put a phone in the house and Kathy is going to call. Whoever answers the seventh call gets to pick three people to not get votes in this week’s elimination. Hopefully, this turns the next week of gameplay into Colin Ferrell’s masterpiece, Phone Booth, shout out to Katie Holmes. If a phone showed up in the BB house when I was there, I’d never leave it’s side, I’d turn the game into a Bye Bye Birdie music montage and everyone would be singing “going steady, steady for good” by the end of it. These players are savvy enough to know that so I’m geeked to see their reactions.

They had a Head of Household competition, Becky and Shelli won. I’m excited for this week because Becky has been a little non-existent so far and this should shake things up. It’s too early to have these huge alliances and it’s going to be fun to watch them all crumble. I bought the feeds this week, and in the last three hours since the live show ended, four hundred things have happened. The feeds also give you access to every back season of Big Brother so now I’m watching season 3 as well, this is just life now, no regrets.

Sunday’s episode will have nominations and there will be another live eviction next Thursday so get involved all you Geek Squad McGees. #BB17 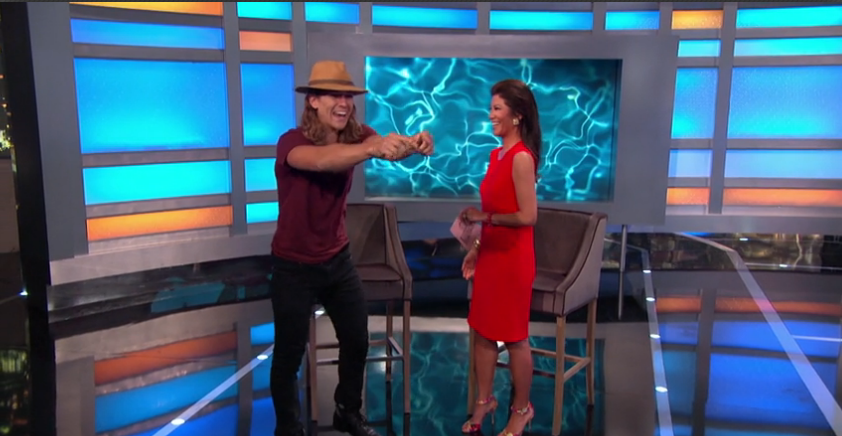