This week in Big Brother there was another takeover twist. That means that some outside entity made a guest appearance and the theme revolved around their picking and choosing different events. The takeover was done by my favorite rapper, Rob Gronkowski. Gronk probably has spit a verse but I’ve never heard one. He’s my fave rapper because when he speaks, he uses more rap hands than if Eminem got bit by a radioactive spider but instead of turning into a Spiderman, he grew four more appendages that were arms and hands and then his feet turned into hands and he then he started rapping. Gronk won a Super Bowl with the Patriots and was also the best part of the Entourage movie. Gronk has thirteen other brothers who are all built like the original Washington Monument statue when George weirdly has a six-pack and shoulders like…well marble but Rob Gronk is the Gronk-est of all the Gronks. And nobody in the house knew who he was when the takeover happened. Kathy Griffin was a more popular takeover host. No shade thrown towards her. Gronk is not a party animal because there are no living animals that can sustain partying like Gronk. Gronk had all the houseguests partying 24/7. Gronk is an extinct party animal that died out long ago but then they found one frozen in ice in Antarctica and thawed it out Encino Man-style but instead of throwing rakes at garbage trucks and starting rug fires he gained consciousness and was like “flip cup now.” Meg won a trip on the Gronk family cruise ship and she doesn’t even know Gronk. Gronk might try to hit on her and she would have no clue he’s a football player and she’ll probably end up making out with a nerdy waiter who looks like Justin Theroux on Sex and the City but his second appearance when he was the bookworm, not when he was the hot upstart writer.

Jeff got eliminated this week because he could not keep his mouth shut. Austin and Vanessa were plotting against him from the start but he gave them the ammo they needed to backdoor him onto the block. Last night’s live episode was basically the Jeff farewell tour in which he tried to grab a few votes on the way out but to no success. Jeff already did Amazing Race so the Jeff farewell tour was like the Grateful Dead farewell tour where everyone was like “come on you’re going to do this a hundred more times until you’re all actually all dead” so don’t be surprised if you see Jeff on ten more reality shows over the next 7-12 years. Jeff didn’t even know who the Head of Household was and also seemed to forget that the Battle of the Block is a thing which is like being on Survivor and forgetting you’re on an island.

The ongoing twin twist is going strong except everyone knows that Liz is playing with a twin. The payoff is going to be in week 5 when Julia enters the house and everyone says “I knew it” all at once. The one glitch was that Liz and Julia recorded their goodbye message to Jeff saying they voted him out but Liz changed her mind after recording it and voted to keep him because she knew she could control him with her flirting— a solid strategy as any.

The best moment of the week came after Jason and Meg won the Battle of the Block and Steve saw Jason walk by and was like “I didn’t get to give you a hug” and Jason was like “it’s fine” and kept walking. There are always outcasts every season but Steve is so taking it to a new level that they should start playing I’m Sorry Miss Jackson every time he does a Diary Room.

Austin continues to play up his Judas angle, which is his alter-ego when he feels like lying to people and wears his top hat like he’s about to break into Putting on the Ritz like the Young Frankenstein with Weird Al hair that he actually is. He’s really catching feelings for Liz, which is dangerous in the game but happens. Clay and Shelli still haven’t kissed which seems crazy if you like someone to not sneak one when nobody is looking.

The Head of Household competition last night involved a group of dancers channeling the Fly Girls and the houseguests had to memorize what they did and answer questions based on their dance routine because it is ‘90s week. Everyone got out so quickly that the dancers didn’t have a chance to do their second routine so they came out and performed it for the hell of it after the comp was over. That is a joy of live television. Shelli and Liz won so their secret alliance is running the house right now. Johnny Mac managed to secure protection from the controlling alliance until at least ten people are left by throwing the Battle of the Block, except James was so bad at it he really didn’t need to do anything. We’ll see if they stick to the agreement.

Becky was quiet this week, we gotta keep her in the game though because she was hit by a train in the face and is also my favorite. Jackie still hasn’t done anything but that might change now that Jeff is out.

I’m excited about ’90s week because maybe Roxette will make an appearance and bust out Joyride or Dangerous. Sunday is noms and Battle of the Block. Wednesday is veto. Another live eviction on Thursday. Join the joyride. 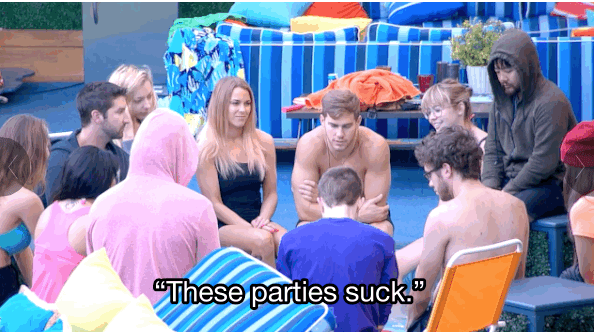