I did a little math this week as I finished up watching season 3 of Big Brother before last night’s BB17 live show. Between tv episodes, the live feeds, and old seasons I’m catching up on and/or re-watching on the CBS Access subscription, I see on average about seventeen hours of Big Brother a week. I’m trying to bump that up to an even twenty-four. Let me say a quick thing about the CBS Access page because I’m spending close to a full day a week there. I pay for the subscription to get the feeds and the classic episodes. You can watch lots of other shows on there, too, but I’m trying to get my Big Brother numbers up so I don’t have time to dive into Zoo right now. That’s what autumn is for. Summer is all Big Brother to me. I pay a monthly subscription fee and it’s worth it except they still run ads throughout any of the back catalog eps. That’s not ideal but the worst part is that the volume at which the commercials play is one thousand times louder than whatever setting you have the show on at. They used to do this on television back in the day and the FCC said it was illegal. George Bush I even ran with this as one of his campaign points. It is the worst. I’ve sent about thirty messages to the “comments” section of the website, so there is a folder on some CBS server that says “lower the volume on your damn ads” over and over again from me. It doesn’t need to sound like a jet taking off just because you’re running the same T-Mobile ad seventeen times per 40 minutes episode. I will fight this good fight and I will win (or quit CBS Access when Big Brother ends in the fall, whatever…)

Your boy, definitely not my boy, Austin put together one of the worst weeks of gameplay in a while. The only way it could have been worse would be if his own alliance actually did backdoor him. They came awfully close to it and are now dealing with the consequences of outing themselves to the full house. Austin has Weird Al hair, which granted is pretty okay. But the top hat is obviously one of the coolest hats out there and he manages to make it look goofy. Can you believe that?!? It’s the most debonair hat there is! Very upsetting. I do like the idea that he’s gone too deep into playing the role of Judas that he can’t pull out of it like the time Sonny Crockett couldn’t stop being Sonny Burnett when he was undercover for too long onMiami Vice. Except this past week Judas wasn’t on a rampage of top hat induced lies. Austin is in love. He looooooooves Liz. He is so blinded by his love that he decides to give out secret information to Jason. He put his alliance and his own game at risk because he’s got the vapors. Big Brother is a game of strategy in which people are supposed to be good at reading reactions and situations. You know what a bad read is? When you steal a kiss from someone and their immediate response is to curl up into a ball, roll away from you, and tell you that they hate you. Austin’s response: yeah, that went pretty well. The whole situation with him flirting with Liz in bed was very uncomfortable to watch. If Austin is that bad at reading signs, he’s not going to be there much longer. He basically sold his game out to Vanessa anyway, he promised her he didn’t care about winning, he just wants to get to the jury house with Liz so he can make more unwanted advances. So gross, yuck daddy.

This week was a perfect example of why I love Big Brother a lot. Because any time there is a “foolproof” plan in place, it goes completely and utterly awry. Vanessa wanted to backdoor Austin because he lied to her face. He lied about who he voted for last week to cause a commotion and he lied about his conversation with Jason where he gave up the goods on the twin twist and Julia’s real name. Vanessa and Jackie conspired with their nominations. Becky and Clay agreed to go up and win it with James throwing the competition on the other side so that Jackie would remain in power and get Austin out of the house. Somehow, Liz managed to win the BOB by herself even though James was doing his best not to win. That left Clay and Becky on the block and Vanessa in power. Clay won the veto but the Sixth Sense alliance realized that backdooring Austin would undo all their plotting around the twin twist to get Julia into the house because they would be losing a number just as their next one would be coming in. Also, do they not realize that the twist in 6th Sense was that they were dead the whole time? Not a great choice of names. So Vanessa had to eat it with all the outskirt members of the house who she pulled into the plot to backdoor Austin. It was supposed to be a nice and easy week. No such thing.

Jason, the kid who used to work at the supermarket but most likely got fired and still lives in his parents basement got backdoored. Blindside backdoored. Never saw it coming. No more Ian Bernardo 2K15. The feeds were way more lit than they showed on the live show about this. The house basically imploded until Vanessa did some triage work on coming up with a reason that Jason had to go. He’s a super fan and being on the show meant more to him than mostly everyone else or so he claimed. There has been a lot of drama in the house already this season and he’s always right around the cause of it so he didn’t exactly lay low. But we had to protect Becky. She must stay in the house at all costs. And don’t think I didn’t catch you Big Brother announcer making a “will Becky’s game be derailed permanently” pun as you cut into commercial. (Reminder: Becky got hit in the face with a train!!?)

Steve showed a whole lot of life this week, putting the hit out on Becky for some reason. It was completely random but he was really digging it to watch Becky get upset over not winning the veto comp. He also had a nice little love moment with the camera following him around like Johnny 5 when he finds out what love is in regards to Ally Sheedy. Steve has a creeper reputation because he wanders around the house, a lot of times talking to himself. He never gives up any information, although he seems to be in with Vanessa now. Becky tried to school him onto why people think he’s creeping (on the feeds) which could be why Steve has it out for her now. But the best Steve moment was Austin throwing him out of the hammock room with no warning—that’s where Steve goes to be alone and mutter in the photo booth and Austin gave him the Ogre “beat it, nerd!”

Johnny Mac is still a fan favorite and we got a nice package about his home life and dental practice. Apparently, he’s way more normal in his private life and doesn’t act like Steve Martin in Little Shop of Horrors when he has patients in the chair. It’s anybody’s game right now with Clay and Shelli being so exposed this early on. They are huge targets and people would be crazy not to try and split them up. You always have to split the couples up. Johnny Mac is in a good position right now.

The least twisty, twist of twins is now over. Julia is officially in the house. I applaud the strategy her alliance used in getting her in but the reveal was so weak (aside from James’s creepy face at seeing TWO pretty women). They’ve promised lots of twists and takeovers this season but we haven’t had one in a while. Perhaps Gronk’s takeover was so successful that nobody could ever follow it. Following this twin twist, the game has reset, so Battle of the Block is done. There will only be one Head of Household per week with two nominations. It was an endurance competition so it ran long and the results didn’t make the live show. Within three minutes of it ending, everyone I know texted me for my live feed password. I know who won but I won’t spoil it here. Head of Household results and nominations Sunday, Veto Wednesday, live eviction next Thursday. 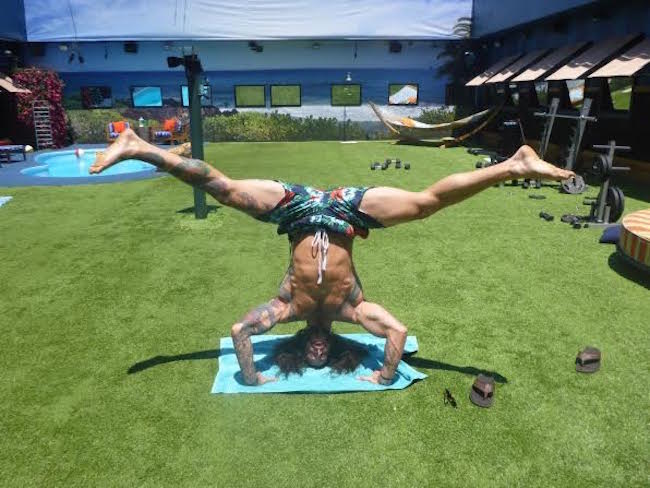