Another Thursday has come and gone and that can mean only one thing. I’ve now been calling everyone in my life Geek Squad McGee for one full week with absolutely no sign of stopping. Ever.

It’s been a wild week. Becky won co-HOH because nobody had been talking game to her and she felt like she needed to establish herself as a player in the game. What she also did was establish herself as someone who has been hit in the face by a train. That is not a mean joke. I am not being derogatory. If you read my first recap with the breakdown of each houseguest, I say I think Becky is the prettiest. I still do. She is my favorite on the show, that is a fact.  And she has literally been hit in the face by a train, also a fact. It knocked her a few feet, put her teeth through her lip, and broke a bunch of bones. And it was only like a year ago. And she didn’t have plastic surgery, she healed on her own. Did you know one time I fell down a flight of stairs on my own and hurt my ankle and had to stay off of it for a month and had to do physical therapy for six months and it still hurts if it gets cold or hot or mild or I run or walk a little bit? Did you know that Becky got hit in the face by a train and a year later she’s playing and winning competitions on a nationally televised tv show while looking like a supermodel? Did you know that I do not want to write anything else here except for another five or six hundred words about Becky getting hit in the face with a train except that I know Becky is so much more than just a woman who got hit in the face by a train, so I won’t. Do you know what kind of self-control that takes? I’m basically a Laura Branigan song now.

Shelli ended up as the sole HOH because she got Johnny Mac to throw the Battle of the Block so that Da’Vonne would go home this week. This worked out well because it means we got so much extra Johnny Mac tv time. My boy does a great Johnny Mac impression, it’s like two parts Yoda, one part Grover, with a hint of Bobcat Goldthwait as Zed from Police Academy 2: Not the New Zoo, The Old Zoo. Then Johnny won the veto and Clay tried to convince him not to use it to save himself. Clay pulled a “do this but only if this highly uncomfortable thing doesn’t make you feel uncomfortable” so of course it didn’t work because you can’t root for anyone who wears a cowboy hat in their memory wall photo. Clay did bust out a sweet Texas A&M football stiff arm move during the veto competition but he broke a lamp in the process. What if that was the next item up? I really wanted to see someone lose veto because they needed the green lamp but it was shattered on the floor because of Cowboy Clay.

Since John uses the veto, Shelli had to nominate someone else. At first, she was going to pick Liz, which would have been a disaster. The twin twist is going on and Da’Vonne figured it out week 3. When they originally did the twin twist in BB5, half the houseguests still didn’t realize there were two of them once both of the twins moved in two months later. Gotta give it to Da’Vonne, she is on top of her observations. If Liz had been on the block when the twin twist broke, she’d probably be out of there since it’s not really that trustworthy to lie to the whole house the entire time about how you’ve been changing clothes with your sister every time you go to the Diary Room. Right now the house is pretty sure they are twins but Julie said Liz and Julia just have to make it to the fifth week without being evicted, not without being discovered so they still have a shot.

Da’Vonne won the Big Brother Takeover Power of the Last Laugh by stealing the seventh phone call from Clay, which was hilarious because it’s funny to see a grown man pout. Shelli had to convince him that lots of people like the number seven, not just football guys. Vanessa and Austin came up with a plan to get Meg nominated since nobody has a reason to vote against Meg. Vanessa is playing a solid game right now, she has the house trusting her and running their thoughts through her like Derek pulled off last year, then she’ll incept you with one of her ideas and you’ll think it’s your own. Austin has Weird Al circa-Bedrock Anthem hair.

With all her maneuvering, Da’Vonne did get evicted, which is a shame because she was entertaining, seemed to genuinely understand the game, and made very valid points—the most important qualification of all. Although I am happy Meg stayed because New York needs someone to represent just for once. Screw you Josh, Season 3.

The Big Brother Takeover twist this week is by Rob Gronkowski aka Gronk aka the best part of the Entourage movie. Gronk likes to party so that will be the theme of the week. There aren’t going to be any have-nots. Gronk is physically incapable of speaking without using rap hands. Gronk is my favorite rapper of all time even though he’s never spit a verse because everything he says is a verse. The HOH competition was a mock game of beer pong called Gronk Pong, which is the most on-brand event in all of Big Brother. I would give it all up just to watch Gronk compete in a Big Brother endurance comp. Gronk’s neck is the size of Jason’s torso.

Vanessa and Austin won HOH after a three-way tiebreak. As the show was closing and we were eavesdropping on the houseguests, I realized that Audrey has a tell. I don’t know how Vanessa hasn’t read this yet. When Audrey plays with her hair, her eyes fog over and she stares out into the strategy abyss. It’s more obvious than Teddy KGB’s Oreo tray. Although I could see how you’d miss it since she just never stops playing with her hair, much the way that she never stops overplaying the game.

Quiet week for Jackie. Gotta see something out of Jackie. All I know about Jackie so far is that her name is Jackie. Also not a ton of James. I think every time they showed James this week he was asleep in a dentist chair. For like three straight episodes. 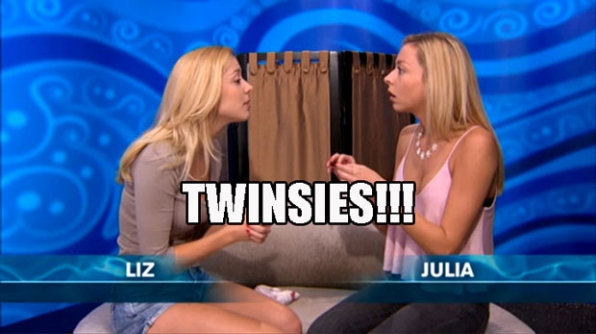