What are friends really for?

Ms. James, a close ally of Mr. de Blasio going back to their days in the City Council, told the Observer she was staying out of the open warfare that broke out yesterday between the mayor and governor. The liberal mayor and fiscally conservative governor have had an uneasy alliance marked with frequent passive-aggressive spats over policy—but yesterday, in an interview with NY1, Mr. de Blasio accused the governor, a Democrat, of having a “vendetta” and seeking “revenge” against anyone he perceives as a political rival.

At an unrelated press event at City Hall this morning, Ms. James cast the brawl as a distraction from more important matters.

“I’m not taking any sides, I’m on the sides of New Yorkers, and I think we should focus on the issues,” she said. “I think at this point in time, one should not take questions and, obviously, take sides that does not inure to the benefit of any New Yorker. The reality is that we should be focusing on issues.”

Mr. de Blasio appeared particularly irked by what he viewed as Mr. Cuomo’s spurious criticisms of his proposals for reforming the controversial 421a building tax abatement, and what he saw as a deliberately humiliating one-year renewal of mayoral control of city schools—which will force the mayor to plead with Albany for another renewal next spring. He accused the governor of working in concert with the Republican-run State Senate, with which Mr. Cuomo has long enjoyed a close relationship, against the Democrat-dominated Assembly, which is generally friendly to the mayor.

Ms. Mark-Viverito, the speaker Mr. de Blasio helped crown in 2013, sought to stay out of the scuffle during an unrelated press conference in the Bronx, despite being asked about it four times.

“Government is a collaborative process and in the best interest of New York City, collaboration is needed. And I look forward to continuing to be helpful in any conversations or any way to advance an agenda that is beneficial to New York City,” she said.

But was she worried Mr. de Blasio’s comments would lead to revenge against city priorities?

“I’ll let you guys play the pundit. I’ve made my comment,” she said.

Asked whether she shared the mayor’s frustration with Albany, Ms. Mark-Viverito said the Council had worked hard to push its agenda there and would like to get more consideration.

“This Council, in the last two years under my leadership, has been extremely engaged in Albany. We have very formulated our policy positions, our agenda, we have gone up to Albany multiple times, engaged with our colleagues so we wanna see that level of engagement and the positions and the thought process that has gone behind that to be taken into account,” she said.

Unlike Mr. de Blasio, she would not say that the governor had worked against the interests of the city. But she did seem to draw a comparison between Albany’s gridlock and the city’s smooth sailing.

“We have made our positions clear, what our positions are, which is what we would like to see,” she told the Observer. “I think we’ve demonstrated through this budget cycle how effective government can be. We have had a really great working relationship with the other side we’ve differed, obviously, on positions, but we’ve been able to find a way to achieve common ground, and I think that were demonstrating what government should be about.”

Ms. James and Mr. Schneiderman in particular have a mixed history with the governor. She accused Mr. Cuomo of not getting “the memo on income inequality” after last year’s state budget failed to include many of the mayor’s initiatives, and later seemed to mock Mr. Cuomo’s anemic Democratic primary win against long-shot liberal challenger Zephyr Teachout.

Mr. Cuomo has always harbored ill will toward Mr. Schneiderman, according to reports and a biography of the governor that appeared earlier this year. The governor reportedly asked whether the attorney general, who holds more liberal positions on fiscal issues, wears “eyeliner,” though Mr. Schneiderman takes medicine for glaucoma.

Mr. Cuomo has also sought to undercut Mr. Schneiderman in other ways, including surveying state agencies for opinions on the attorney general. Eliot Spitzer, a former governor and attorney general, told the New York Times it was “an unprecedented and unusual mechanism.”

But Mr. Schneiderman, appearing in Brooklyn today to unveil a new affordable housing project, told the Observer that he works well with state agencies. He repeatedly declined to offer any specifics on Mr. de Blasio’s remarks.

“We are working together every day,” Mr. Schneiderman said.

He added that Mr. de Blasio and Mr. Cuomo have a “commitment to the people they represent. There is no possibility they are going to lose sight of their responsibilities because of any personal issues.”

One Democrat who did have Mr. de Blasio’s back was Brooklyn Borough President Eric Adams. Mr. Adams, a former Democratic state senator, defended the mayor after he spoke at Mr. Schneiderman’s event, telling the Observer he was “grateful” Mr. de Blasio spoke out.

“We’re frustrated and angry and expect more from a Democratic governor,” he said.

Updated to correct statement by Ms. James; an earlier version of this story quoted her as saying “endorse to the benefit of any New Yorker.” 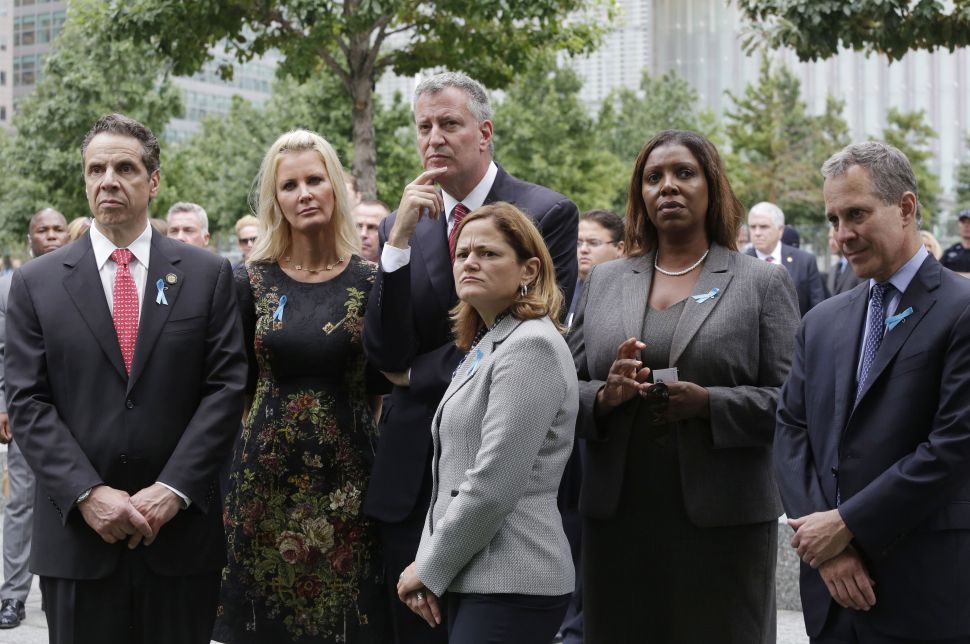