In February, 2013, I wrote for this website a column, “My fellow Republicans: Abortion takes an innocent life – same sex marriage does not.” (http://politickernj.com/2013/02/my-fellow-republicans-abortion-takes-an-innocent-life-same-sex-marriage-does-not/) In this column, I specifically advocated that the Republican Party drop its opposition to same sex marriage and take a national platform position that the legal status of same sex marriage be decided by the states.

I took this position in spite of the emphatic prohibitions against homosexuality in the Torah Judaism to which I adhere as an Orthodox Jew. Two factors motivated me to write the column: 1) a desire for equality for my gay and lesbian fellow citizens; and 2) a political concern that the Republican opposition to same sex marriage is driving millions of voters away from my party.

As an advocate of judicial strict construction, I do have concerns about the basis of the decision in the case of Obergefell v. Hodges, announced last Friday, June 26, 2015, in which the United States Supreme Court held that the United States Constitution guarantees a nationwide right to same sex marriage. It is debatable whether the Constitution actually explicitly or implicitly provides such a right.

Nevertheless, as an advocate for legal recognition of same sex marriage, I cannot help but be happy with the result of the case. While I wish that this outcome had been achieved through legislation, either at the federal or state level, I am pleased that at long last our gay and lesbian citizens will achieve the same legal marital recognition of their committed same sex relationships as that accorded to heterosexual marriages.

Since the announcement of the decision, however, I have become apprehensive of those activists in certain elements of the Left and gay communities who would use the decision in Obergfell to infringe upon the rights of those religious denominations who do not condone same sex relationships. Specifically, these individuals would advocate 1) the removal of tax exempt status from such denominations (e.g. Orthodox Jewish synagogues and Roman Catholic churches) and 2) the denial of the right to perform legally recognized weddings to clerics who refuse to perform same sex marriages (e.g. Orthodox rabbis, Catholic priests).

There is already talk of attempts by these activists to institute litigation to compel the withdrawal of tax exempt status from religious organizations who will not sanction same sex marriages. Such lawsuits would cite the 1983 U.S. Supreme Court decision in the Bob Jones University litigation as the basis for the judgement sought. The Supreme Court in that case denied the university tax exempt status because it refused to admit applicants engaged in interracial marriage or known to advocate interracial marriage or dating.

My fears were heightened by a Time magazine column published on June 28, 2015, the Sunday following the announcement of the Supreme Court same sex marriage decision. The column, entitled “Now’s the Time to End Tax Exemptions for Religious Institutions,” was authored by Mark Oppenheimer, a liberal religion writer for the New York Times.

In the words of the hallowed U.S. Supreme Court Chief Justice John Marshall, the power to tax is the power to destroy. Taxation of Orthodox Judaism would involve a destruction, partial or otherwise, of an institution and religious liberty central to my life.

To paraphrase Thomas Jefferson’s statement regarding the Missouri Compromise, the Oppenheimer column, for me, was a “firebell in the night.” I had hoped that the granting of legal status to same sex marriages would lead to increased American societal tolerance and understanding. Instead, articles like the Oppenheimer piece have increased my fears of a cultural war.

The Orthodox Union, the modern Orthodox Jewish organization to which I owe my allegiance issued a statement in the wake of the Obergfell decision which reflects my exact future concerns:

The following language from the statement is the core of my concern as well:

“In the wake of today’s ruling, we now turn to the next critical question for our community, and other traditional faith communities – will American law continue to uphold and embody principles of religious liberty and diversity, and will the laws implementing today’s ruling and other expansions of civil rights for LGBT Americans contain appropriate accommodations and exemptions for institutions and individuals who abide by religious teachings that limit their ability to support same-sex relationships? ”

Bottom line: To avoid a cultural war, both same sex marriage and the religious liberties I hold dear must receive full legal protection. If the vision of two of my most cherished friends, one a Republican center-right lesbian and the other a liberal Democratic straight prevails, this goal can be achieved.

The Democrat is New Jersey State Senator Loretta Weinberg. As Bill Buckley said of John Kenneth Galbraith, as a political conservative, I am proud to have Loretta as a transideological friend. Loretta was the prime sponsor of the Marriage Equality Act, which passed the state legislature but was vetoed by Governor Christie. The bill explicitly stated that no member of the clergy and no religious leader would be required to officiate or host a same sex union. In sponsoring legislation of this nature, Loretta was most protective of religious liberty.

The Republican is Susan Jester, who formerly served at the New Jersey Republican State Committee as North Jersey Political Director. Susan played a vital role in the 1997 GOP get-out-the-vote campaign that was so vital to the reelection of then Governor Christie Whitman.

Susan now lives in San Diego, where she is a leader in the LGBT community and a frequent panelist on political television talk shows. In her efforts on behalf of marriage equality, she has emphasized the need to protect religious liberty as well.

Susan is like family to me, and I talk to her often. Last Sunday night, I expressed to her some of the same religious liberty concerns stated in this column. In response and in order to calm some of my anxieties, she sent me the following statement of the LGBT organization, Log Cabin Republicans regarding the Obergfell decision:

“At hand lies a tremendous opportunity for healing on all sides. Log Cabin Republicans encourages marriage equality advocates to resist the temptation of being ‘sore winners’ and respecting others who may not yet be at a place of acceptance; and opponents of marriage equality who can light a way out of the LGBT culture wars by recognizing that civil marriage for committed same-sex couples is no threat to any straight couple’s marriage, family, or faith. “This is a watershed moment for the LGBT rights movement — one that had its genesis on the center-right. The Log Cabin Republicans congratulates … those committed same-sex couples who moved national sentiment on marriage equality so far, so fast simply by living their lives in quiet dignity.”

If the vision of the Log Cabin Republicans prevails, America will be a land in which both same sex marriage and religious liberty will receive ample legal protection. Most importantly, we will live in a society united by a spirit of toleration rather than divided by a bitter cultural war. 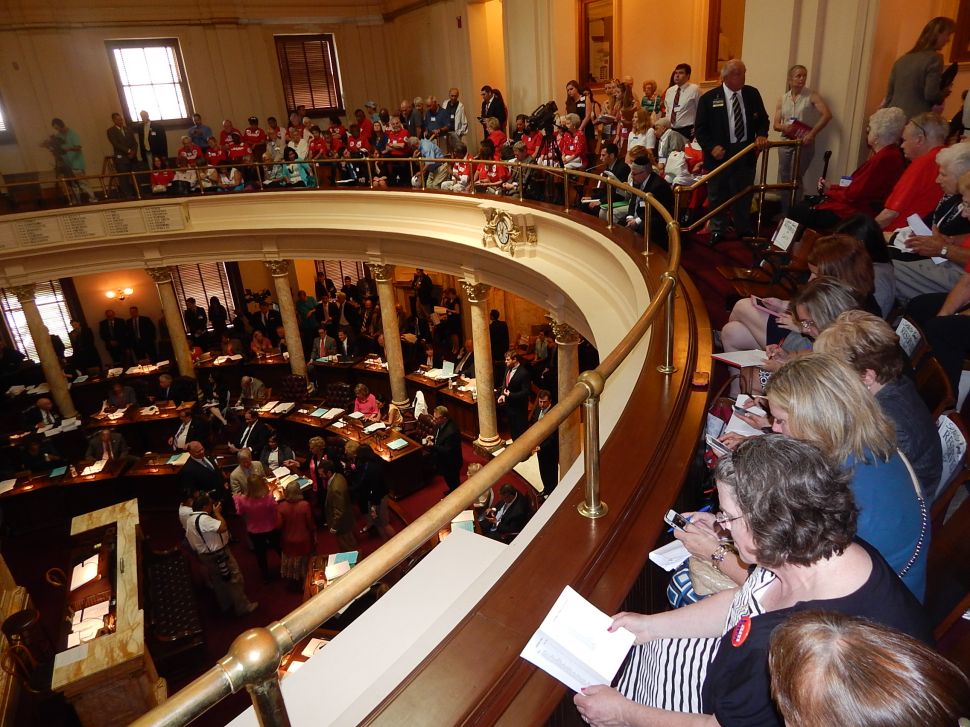