Jeb Bush is coming to New Jersey for two fundraising stops on July 23, as has been well reported, on Observer and elsewhere. So that’s not news. With the invitations now available, what’s newsworthy is the strength of the host committee, which is studded with NJ fundraising royalty. The biggest get is surely David Tepper, the Livingston billionaire and single richest New Jerseyan, who ranked as the world’s highest paid hedge fund manager two years in a row, notching $3.5 billion in 2013 alone.

Also on the list are previously reported heavy hitters like Gail Gordon, Cheryl Halpern, George Klein, Hersh Koslov, Sen. Joe Kyrillos, and Woody Johnson. With an expectation that co-chairs will find 10 “max out” donations of $2700 each, and a total of 36 co-chairs, the pair of events is looking at $972,000 as a reasonable target. But according to one of the co-chairs, the Bush team will be “thrilled” with even $400,000-500,000 between the two events, telling the Observer, “Remember, it’s not a fair fight in Chris Christie land.” That amount would compare favorably to the approximately half a million Hillary Clinton raised at an event starring Jon Bon Jovi in Monmouth County earlier this summer, and she’s not competing against a sitting NJ governor.

The defection of Mr. Tepper has got to hurt, not only because he lives in Mr. Christie’s boyhood hometown of Livingston, but also because he had been an early and generous supporter of Mr. Christie’s education reforms, having put what the Star-Ledger described as “money – a lot of money” into Better Education for Kids, the PAC set up to influence New Jersey education policy. Mr. Tepper had even appeared with New Jersey first lady Mary Pat Christie to promote the effort.

Another interesting mini-drama playing out here involves Cliff Sobel, the Short Hills businessman who served as President George W. Bush’s ambassador to both the Netherlands and Brazil. As the Observer and our sister site PolitickerNJ have been reporting, Mr. Sobel has “tried to be cute about who he’s backing.” In a February Observer story, we reported that Mr. Sobel “will now be aiding his efforts on behalf of electing Jeb Bush president.” Mr. Sobel declined to confirm that and ducked several attempts to contact him, though another of Mr. Bush’s New Jersey backers, former RNC finance chief Larry Bathgate told the Observer, “Cliff promised to do his own thing. This is not just Larry and Cliff. There’s a ton of support.” In a later Observer story about two more Jeb events in Manhattan, Mr. Sobel again “tried to be cute” – his son Scott Sobel appeared on the invitation, though Mr. Sobel himself also attended the event.

Today, the Observer can confirm that Cliff Sobel will be hosting a fundraiser for Jeb at his Southampton home on the afternoon of July 25, the same day that Wall Street bigs Ken Lipper and Emil Henry will be hosting their own events in East Hampton. Mr. Sobel has yet to return an email (if he does, this story will be updated to reflect his remarks) but the Observer confirmed the event and it’s visible through a secret link on the Jeb website, though it spells the host’s first name more like a Clif bar.

One can only conclude that the missing f is the one the ambassador is using to say “F Christie” as he finally made up his mind in favor of the brother of the president who sent him to Holland and Brazil, rather than the governor and friend who accompanied him to Mexico less than a year ago. Politics is a rough business. 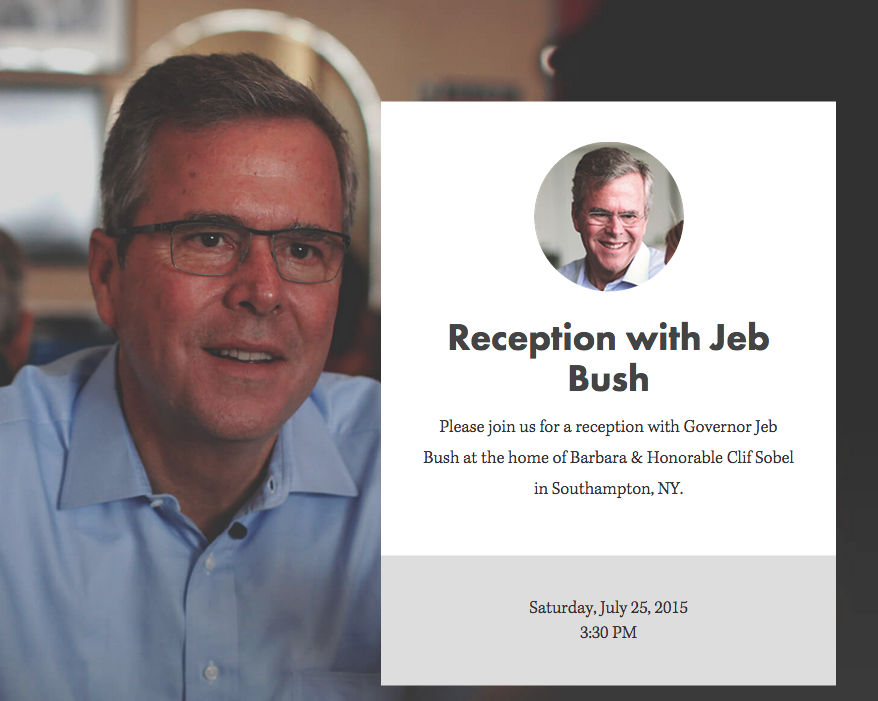