Uber did everything it could to stop a bill capping their growth from happening. It hosted a job tour yesterday, tried to negotiate with Mayor Bill de Blasio on Monday, and even put out an app update to show users the consequences of the bill. Yesterday—Mr. de Blasio dropped the bill.

But what about the yellow cab drivers? They’re mad.

The news that the City Council wouldn’t move forward on a bill to cap the growth of Uber and other for-hire companies at 1 percent angered taxi drivers and progressives groups to the point that they took to the steps of City Hall earlier today. Although Uber’s protest was a little more organized—uniforms, free food, and similar posters—the cab drivers didn’t disappoint in the sweltering heat.

The drivers held posters that read “Don’t misuse your power,” “Protect the poor, not the rich!” and “We’re disappointed, but we’re determined,” while chanting “Workers united will never be defeated.”

Led by the executive director of the New York Taxi Workers Alliance, Bhairavi Desai, the drivers expressed their concerns with the lack of the cap bill. Borrowing a page out of Mr. de Blasio’s playbook, Ms. Desai called the Uber versus yellow taxi war the “tale of two cities,” where Uber thrives and the cab drivers don’t. (The yellow taxi industry has been traditionally allied with Mr. de Blasio.)

Ms. Desai doesn’t believe Uber contributes to job growth in New York City at all. Earlier this week, with the launch of its job tour, Uber tried to show the city that the platform, in fact, provides New Yorkers with hundreds of job opportunities.

“In order for you to earn an income from Uber to survive, you need to have another job already,” Ms. Desai told the small crowd. “That’s not job growth, and that is not acceptable.”

“Whatever they’re doing—the new cars that they’re putting out on the street—let us be clear, going up against the cap so they could have an unlimited number of vehicles on the streets of New York City, is Uber’s business model,” she told the crowd. “It is not a transportation policy. It is a business model that is predicated on denying tens and thousands of hard-working people the right to earn a full time living. Uber’s business model is predicated on turning full-time professions into supplemental income, and they do it by attacking the right of a majority work force of people of color.”

Also present at this morning’s protest was Councilman Ydanis Rodrigez, chair of the Council’s Transportation Committee, who was a sponsor of the legislation Uber opposed. Mr. Rodriguez told the crowd that if Uber wanted to do business in the city, they couldn’t become the next Walmart, but Mr. Rodriguez surprisingly recognized Uber’s willingness to work with the Mayor. “Uber compromised,” he told the crowd.

Instead of the proposed cap bill, the city will conduct a four-month study on the effect of Uber and similar for-hire-vehicle operators on the city’s traffic. The original bill would’ve allowed Uber to add 200 vehicles into the city over the next year, even though Uber envisions itself adding over 10,000 cars into the city every year.

“We’re deeply disappointed in the political system that we feel has really failed us all along,” Ms. Desai said, “We’re sad that the Mayor backed off, and we’re angry that the governor at the final hour, stepped in, having met privately with the billionaires, and not one meeting with one worker.”

At a press conference this morning, Mr. de Blasio vowed to continue to push for a way to regulate Uber’s growth, comparing the e-hail app to an oil giant.

“Obviously, Uber is going to have a substantial presence in this city under any scenario. What that doesn’t mean is that Uber gets to go without any kind of rules or regulations which is essentially what they have tried to do all over the country and all over the world,” he said. 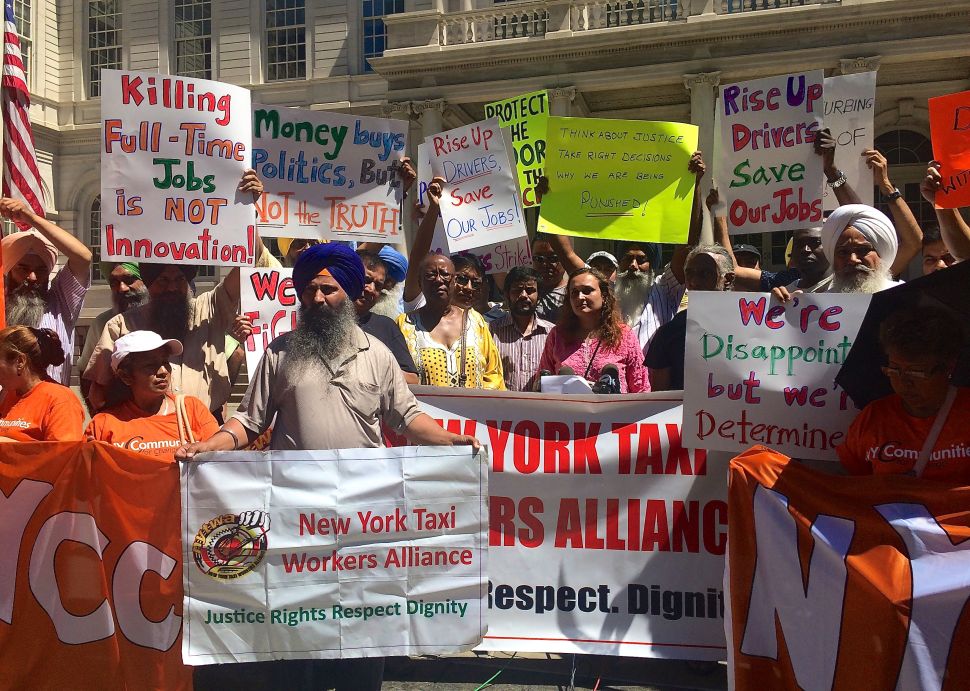