In an interview with Salon, renowned and self-proclaimed “dissident feminist” Camille Paglia lambasted Columbia graduate Emma Sulkowicz’s mattress performance, calling it “a parody of the worst aspects of that kind of grievance-oriented feminism.”

Emma Sulkowicz is a Columbia University graduate who was allegedly raped by fellow student Paul Nungesser, in 2012. The university found Mr. Nungesser “not responsible” and the NYPD did not pursue the case due to lack of evidence. In response, Ms. Sulkowicz launched Carry The Weight, a performance art piece for her senior thesis where she carried a 50-lbs twin mattress with her for a year on campus until Mr. Nungesser was expelled. He was not, and she towed it all the way up the stage at graduation, where University president Lee Bollinger refused to shake her hand.

Although Ms. Sulkowicz’s project was intended to be a campaign against sexual assault, at her campus and all American universities, Ms. Paglia sees it as a form of self-victimization.

“I’d give her a D!” Ms. Paglia, a professor at University of the Arts in Philadelphia, told Salon (ArtNet News first picked up on the comments). “I call it ‘mattress feminism.’ Perpetually lugging around your bad memories—never evolving or moving on!”

Ms. Paglia prides herself on her thick-skinned, “Amazon” brand of feminism “where you remain vigilant, learn how to defend yourself, and take responsibility for the choices you make. If something bad happens, you learn from it. You become stronger and move on.”

Ms. Paglia also condemns Columbia for allowing her to pursue the project, for which she received academic credit.

“Columbia…utterly disgraced itself in how it handled that case. It enabled this protracted masochistic exercise where a young woman trapped herself in her own bad memories and publicly labeled herself as a victim, which will now be her identity forever. This isn’t feminism—which should empower women, not cripple them.”

Ms. Paglia went on to discuss how situations like these represent what she sees as American colleges’ hyper-obsession with babying students.

“We have people emerging with Ivy League degrees who have no idea how little they know about history or literature. Their minds are shockingly untrained. They’ve been treated as fragile emotional beings throughout their schooling. The situation is worsening year by year, as teachers have to watch what they say and give trigger warnings, because God forbid that American students should have to confront the brutal realities of human life.”

The full interview with Camille Paglia is available here. 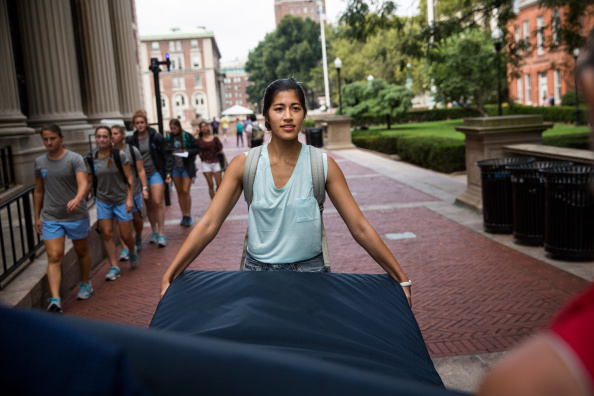