Three years after the first giddy, empty-headed but entertaining male stripper movie Magic Mike was deservedly dead and six feet under, along comes this summer’s silly, inexcusable sequel. Without whatever bogus originality director Steven Soderbergh brought to the first one, the fun is gone, and so is the energy and verve of the dance routines, as well as every conceivable raison d’être for its existence except to cash in on the voyeurism and eye-rolling titillation that appealed to the fantasy level of so many frustrated women and gay men the first time around and turned Magic Mike into a staggering money maker.

The title of the second go-round is as preposterous as everything else about it. The XXL refers to the size of the jockstraps worn by the Kings of Tampa, but since they’re all stuffed with dreams and Tampax, it’s a phony deception that plays out like wishful thinking. Except for the admirable testosterone on display that represents hours in the gym instead of the acting class, the rest of Magic Mike XXL is seriously stupid.

When this yawn begins, Mike (still played by Channing Tatum, on whose pre-stardom career as a male stripper the concept was based) has retired and opened a furniture business in Tampa, but it’s clear from the way he keeps staring blankly at the ocean that he’s nostalgic for his old sweaty thong. Then what’s left of the gang from 2012 (minus Matthew McConaughey, who moved from Chippendales to acting school) shows up on their way to one last stripper’s competition in Myrtle Beach for the Fourth of July, and they need Mike to win. In no time he’s back on the whey and protein powder and boarding the tour van in time to rip his clothes off, but he can’t carry the movie by himself.

Without Mr. McConaughey’s Dallas and Mike’s protégé, The Kid (Alex Pettyfer), the road movie that ensues is stuck with the first movie’s supporting-cast hunks, none of which are interesting enough to sustain audience rapport beyond the first pelvic grunt. Joe Manganiello is back as Big Dick Richie, aptly named because he’s cursed with a Johnson too humongous for any woman to service, and Matt Bomer reprises his role as pretty boy Ken, a failed actor and Reiki instructor replete with the “drag” name Clitoria Labia, but they all seem more interested in pinching, hugging and flirting with each other than in the pathetic women who shower them with dollar bills.

Accompanied by ghastly oldies from the “Golden Age of Hip-Hop,” the new erotic dance routines are a limp-wristed parody of their earlier and grittier act, which is why the first stop on their trip to South Carolina is a gay bar where the drooling crowd scream their heads off as the strippers mince and shake their booties with their hands on their hips. To make sure the real paying audience doesn’t mistake them for the gayest act since the Village People, director Gregory Jacobs (Mr. Soderbergh’s assistant on the first film) and inept screenwriter Reid Carolin insert a few women to spread their legs in walk-ons, including Andie MacDowell as a drunken Southern divorcee hell-bent on proving Big Dick’s endowment doesn’t go to waste.

Other wasted female strays in meaningless roles are Jada Pinkett Smith and Elizabeth Banks. Directed in mumblecore fashion with overlapping dialogue, the actors are all encouraged to swallow their lines along with their organic yogurt until whole scenes shuffle by without one comprehensible sentence. Feeble attempts at plot or character revelation are laughable. There is no climax. Magic Mike XXL just fades to black and Channing Tatum goes back to his furniture business. The rest of us should be so lucky. 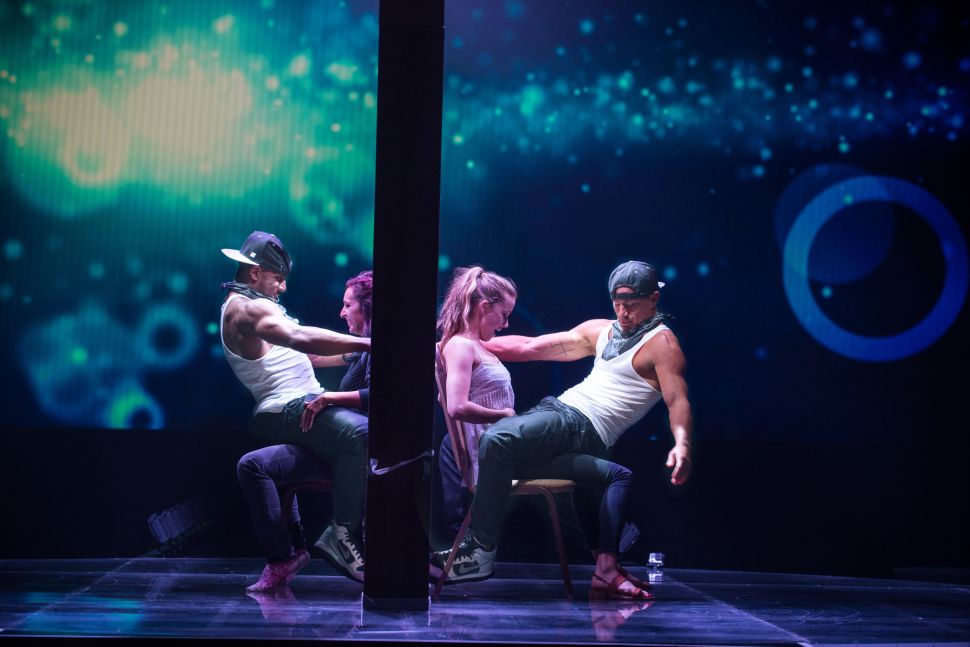