Earlier this month, a cake made to resemble Queen Elsa of Disney’s blockbuster Frozen missed the mark and made headline news as a massive “cake fail.” What Internet users didn’t realize before they laughed and shared away on social media, blogs and news sites is that a non-profit commissioned the cake for a hospitalized chronically ill child and that the cake fell to the weather. If you didn’t know, fondant and rain don’t mix.

There’s a bright side to the mishap, though. The child was still overjoyed to receive the cake and now, Icing Smiles, the charity, is using the debacle to inspire friendly competition between bakers and fundraise on Crowdrise. Since the campaign began a week ago, more than $4,500 has been raised.

More than 100 bakers submitted photos of their cakes to the fundraising campaign, and now, voters can support their favorite edible masterpieces with monetary donations. There’s a little gift basket prize for the baker of the cake that raises the most, and all of the proceeds benefit Icing Smiles. The campaign contributions will help cover the costs of bringing cakes to sick children.

Over the past five years, Icing Smiles has been bringing joy in cake-form to children battling serious illnesses across the U.S. They’ve partnered with more than 8,000 volunteer bakers to gift children multiple cakes for events like their birthdays and the end of their treatment as well as one dream cake, a 3D fondant cake like the one crafted to resemble Elsa.

After the real story about the Elsa cake fail was finally revealed, the non-profit started receiving a ton of donations through their site. Since so many people wanted to support the organization, they decided to do it in a fun, public way and took to Crowdrise.

“This way, we let the bakers celebrate their amazing cakes and let the donations go through the fundraiser rather than just go right through us,” Cher Bork, develoment manager at Icing Smiles, told the Observer.

The fundraiser is running now through August 10. 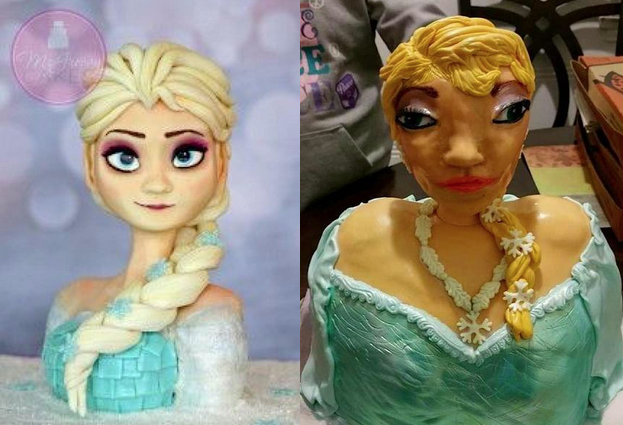